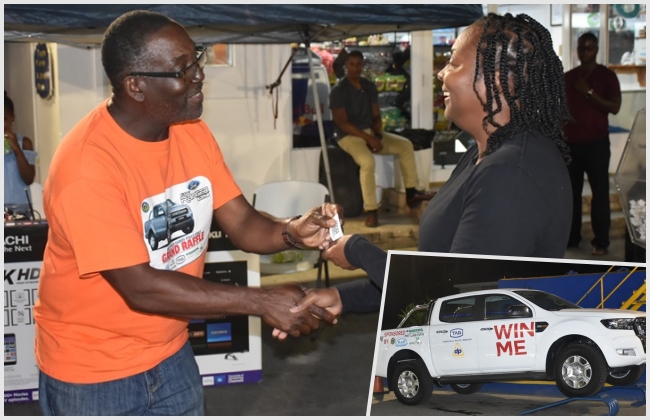 This Christmas is one that East End resident Muriel Penn will not soon forget as she became the grand prize winner of the Royal Virgin Islands Police Force’s (RVIPF) Vehicle Raffle Fundraising Competition on Christmas Eve.

Penn was the lucky winner of a brand new 2019 Ford Ranger XLT, which came compliments of the joint partnership between the RVIPF, Tortola Auto Group (TAG) and Delta.

She will also have access to six months’ worth of free gas courtesy of the petroleum company.

Penn said she felt blessed after hearing the news, but revealed she initially had her heart set on winning the vehicle months before the draw.

“I told them I coming back for it. I don’t know why … I was shocked when they called me,” the elated Penn expressed.

Meanwhile, Margaret Bolton — who is also a resident of East End — won a cash prize of $500 while a Virgin Gorda resident who only went by the name Beckie claimed a 55-inch Hitachi Roku flat-screen television to round off the night’s prizes.

Now that the Christmas raffle has concluded, Deputy Commissioner Alwyn James told BVI News that the RVIPF now plans to use the proceeds of the competition to spread the spirit of philanthropy, giving, and cheer throughout various local communities.

“We decided that we wanted to raise a bit more funds because we want to do larger projects. We look at the at-risk children within our community, we look at the seniors, we think about different projects where we can help children after school and those types of things,” James stated.

“All of that needs financing, so in order to be able to support those projects, we decided to do a fundraiser by raffling a vehicle. We approached TAG and they were happy to go along with the initiative, and then we got some other sponsors like Delta Petroleum, NAGICO, KAD Pool Services, Travel Wize, and PST Law Firm that gave us some prizes that contributed to the early drawings in August, October, November and December as well.”

The initiative is part of the RVIPF’s Police Week of activities, which also saw the force donating food hampers to the Family Support Network, donating $7,500 to the BVI Autism Centre, and engaging with the seniors through the ‘Plant a Tree’ exercise along with a senior night of activities.
Add Comment