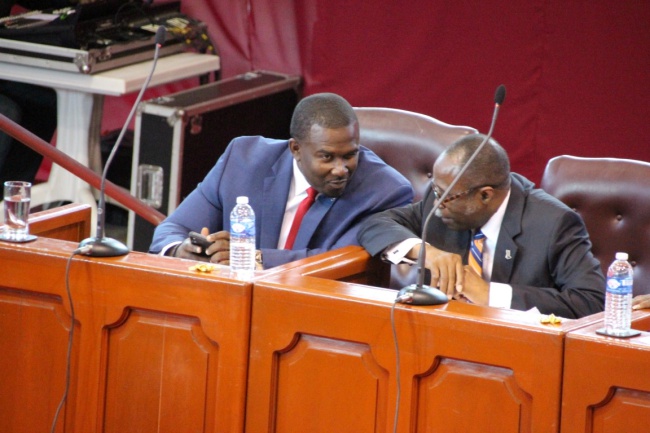 Gov't has shut us out as COVID spreads to our districts

With the COVID-19 virus now reaching the communities of East End/Long Look and Sea Cow’s Bay, district representatives for those areas have said government has kept them in the dark regarding information on the matter.

Penn said he had made several attempts to gather information from the government regarding the direct impact of COVID-19 within his district but was unsuccessful.

“I sent a message in the House of Assembly chat asking for a conversation between all the elected members. We need to understand. If not the specifics, we need to understand what we are up against so we could prepare our constituencies for the eventuality … This is not a ‘government against Opposition’ situation,” said Penn who is also Leader of Opposition.

“I stood right in this same room next to the Honourable Premier, giving my support to get those things done to support the people. [But] we, for some reason, recently have been shut out of any discussion on COVID-19,” he added.

Penn further said this is not the first time government has been keeping members of the Opposition in the dark regarding information on COVID-19.

He said the Opposition had to force the government in a recent session of the House of Assembly to have a conversation with them about the recent suspected case on the sister island of Jost Van Dyke.

“We ask for a similar conversation on this recent and most pronounced spread that we’ve had to date in this territory and we’ve not yet been afforded the opportunity to sit around the table and to understand, especially somebody for who represents the largest community in this territory,” the Eighth District Representative stated.

“I need to be able to talk to my people and I need to talk with them with facts. And to be honest with you, I can’t say that I have all the facts that I can communicate clearly with my people and I think that needs to change,” Penn explained.

Have to rely on rumours from residents

Senior Opposition legislator Fraser shared similar sentiments, stating that the information he receives regarding COVID-19 in the territory is usually either through media entities, word-of-mouth or through social media messages.

Fraser referenced his recently failed attempt to gather information from the government following reports of his district being affected by the virus.

He said: “That situation that we talk about in Sea Cow’s Bay, yes, the young lady that came from Jost Van Dyke; she was in Sea Cow’s Bay whether people want to admit to it or not.”

Screening to be conducted

The East End/Long Look and Sea Cow’s Bay communities are among four areas across the territory which have already commenced COVID-19 screening.

The other areas include the sister Islands of Virgin Gorda and Anegada.