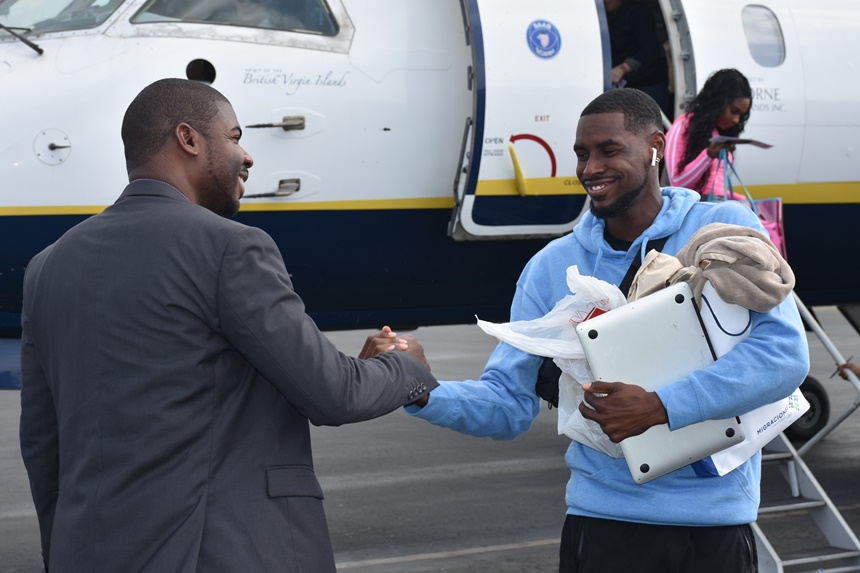 The British Virgin Islands’ top professional athletes received a warm welcome and high praises from local sporting officials when they arrived at the Terrance B Lettsome International Airport on Thursday, October 10.

Chantel Malone, Kyron McMaster and Eldred Henry who were all returning from the World Championships in Doha, Qatar all received VIP treatment as they were shuttled from their plane to the IAM Jet Centre lounge.

Ashley Kelly had travelled into the territory on an earlier flight but was present to also welcome home her teammates.

Excited to be home

Speaking to BVI News after her arrival, Pan American Games gold medalist Malone said she is excited to be home.

“I wish I could have come home a little earlier like right after the Pan Am Games but unfortunately I had competitions left so this was the only time that made the most sense.”

McMaster said he always looks forward to returning home for a number of reasons.

“I love being home. I don’t like to be away from home too often so I try to come back whenever I can because being home humbles me,” he said.

“As for the children coming up, I like that I can set an example for them and they could look up to me in wanting to be just like me or better than me and wanting to achieve more than me. So I like that I could’ve set up a pathway and let them know that somebody from the BVI could have done it so there is no reason that they can’t do it as well,” added McMaster, who is the 2019 Commonwealth Games champion in the 400-metre hurdles.

Athletics in the BVI taken to the next level

Minister of Sports Dr Natalio Wheatley told BVI News that it was good to finally have the athletes back in the territory so they could be congratulated in person.

He described them as having taken athletics in the BVI to a higher level.

“We are right on the cusp of dominating in the world for a territory that has a population of about 30,000 persons and I think that is a really big deal. I think persons looking at their accomplishments can really believe that they can do it too, so it’s important for our young people to know what’s happening, that the BVI is competing at an elite level internationally,” Dr Wheatley said.

BVI to be proud

Meanwhile, President of the BVI Athletic Association Steve Augustine said that the BVI has every reason to be proud of the accomplishments from all the athletes.

“I think this is a great opportunity for us to continue to strengthen and build on BVI pride. These guys are competing on the world stage against the world’s best and they are showing up and they continue to show up. I’ve been saying this from day one and it’s not just our senior athletes, it’s our junior athletes as well,” Augustine said.

Plead to the public to come out

He also pleaded to the public to come out and show support to the athletes at the scheduled events that have been organised their return. Things will kick off with a Recognition Ceremony and Motorcade today, Friday, October 11.

President of the BVI Olympic Committee Ephraim Penn shared similar sentiments to Augustine and said the events will benefit the future athletes of the territory.

“That’s why we are so excited about what’s happening this weekend because they’re giving back to the community and by doing so, hopefully, they’ll encourage younger athletes to strive for that success because they now have real-life role models to look up to and interact with,” Penn stated.

He further said: “We are so grateful for them for giving up their time to come back to give back to the community and we are encouraging everyone to come out and interact with them and to see that yes we do have heroes right here in the British Virgin Islands.”

The Recognition Ceremony which is being hosted by the government is in honour of Malone’s recent gold medal achievement at the Pan Am games. She created history by becoming the first person from the BVI to win a medal at those games.

The motorcade is scheduled to start at 3 pm. It starts from the Queen Elizabeth II Park to the Central Administration Complex where the ceremony will begin at 4:30 pm.

Meanwhile, the BVI Olympic Committee will be hosting a free sports clinic on Saturday, October 12 from 9 am to 1 pm at the Multipurpose Complex and A.O. Shirley Recreation Grounds.
Add Comment