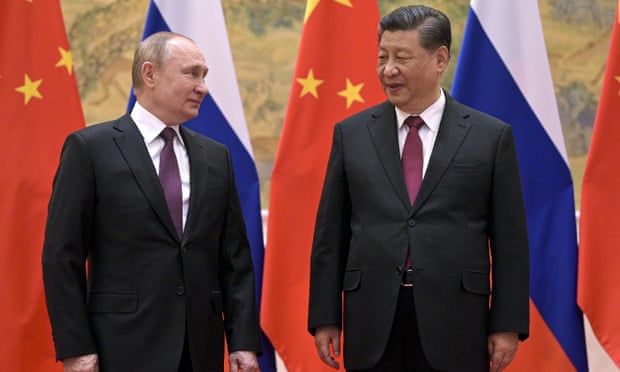 Exclusive: exercises are to prepare China for the possibility of similar embargos from the US and its allies

Concerned about sweeping Russia-style sanctions from the west, Beijing has ordered a comprehensive “stress test” to study the implications of a similar scenario for its economy, the Guardian has learned.

According to a person with direct knowledge of the matter, an extensive exercise began around late February and early March when western allies imposed unprecedented sanctions against Moscow. Several key Chinese government agencies – from banking regulation to international trade – have been asked to come up with responses if the west imposed the same embargos on to China.

“Those involved in this exercise use how Russia was treated as a baseline for China’s own policy response should it be treated in a same fashion by the west,” the person added. “This stress test involves a range of methodology, including modelling.”

Beijing did not specify why it had asked its vast bureaucracy to carry out such an exercise, the person said. They said that it was a “natural reaction” from Beijing given its close relationship with Moscow. A second source, who wishes to remain anonymous, said that Chinese diplomats had in the past few weeks also been meeting experts to understand the trajectory of this conflict.

“From Beijing’s perspective, if the US-led western allies could take such measures against Moscow, they could also do the same to China. Therefore, it needs to know how resilient the country really is,” said Tong Zhao, a senior fellow at the Carnegie Endowment for International Peace based in Beijing.

But Edward Fishman, a former adviser to John Kerry on economic sanctions at the US state department, said that no economy – not even China – was immune to the types of financial sanctions that the west has wielded against Russia. “There is no good alternative to the western financial system, and that’s likely to remain the case for a long time,” he said.

“The future of economic conflict between the west and China, therefore, will likely be narrower in scope than what we’ve seen from the west in recent months against Russia. It will centre on jockeying for leverage in strategic areas – such as frontier technologies and next-generation infrastructure – not on trying to produce broad-based economic disruption.”

Zhao said that the current exercise by Beijing could be an attempt to understand what the short-term cost to China would be if it provided material support to Russia over the course of this conflict. US officials this week said they had not yet seen military and economic support for Russia from China, despite earlier warnings of the possibility.

On 22 April, officials from China’s finance ministry and the central bank held a meeting with domestic and foreign banks, including HSBC, to discuss how they could protect China’s overseas assets should Russia-style sanctions led by the US and its western allies also be imposed, according to a recent report by the Financial Times.

Chinese analysts were caught off-guard by Russia’s invasion of Ukraine on 24 February, several personnel said. But the western response, according to Zhao, was “more surprising to the Beijing leadership initially”.

“For the past few years, there’s been a growing concern among Beijing’s leadership that a strategic conflict between China and the west may not be a question of whether it’d happen, but when it will happen, in particular over the issue of Taiwan.”

Beijing has strongly opposed any link to Taiwan when discussing the war in Ukraine, insisting they are two separate matters. Last week, the Chinese embassy in London again criticised British media’s comparison of the two, saying the Taiwan issue “bears on China’s core interests and we will brook no external interference”.

The information office of China’s state council has been contacted by the Guardian for comments.

China’s foreign ministry in the past week stepped up its rhetorical support for Russia, saying that the two sides “rise above the model of military and political alliance in the cold war era”, and that the two countries “commit themselves to developing a new model of international relations”.

Curiously, around the same time, Ukraine’s foreign minister, Dmytro Kuleba, told the official Xinhua news agency that Kyiv was keen to involve Beijing in ensuring its security. “We propose that China becomes one of the guarantors of Ukraine’s security, this is a sign of our respect and trust in the People’s Republic of China,” he said on Saturday.

In 2013, China agreed to provide Ukraine with “security guarantees” if it is invaded or threatened with nuclear attack. But critics say Beijing remained evasive on the same issue after Russia’s invasion in February.

Kuleba also told Xinhua that European countries are concerned about the situation because they could not guarantee Russia would not invade them tomorrow. “We also believe that this war is not in China’s interests,” he said, adding: “If Russia is not stopped now, it will lead to more crises a few years later.”