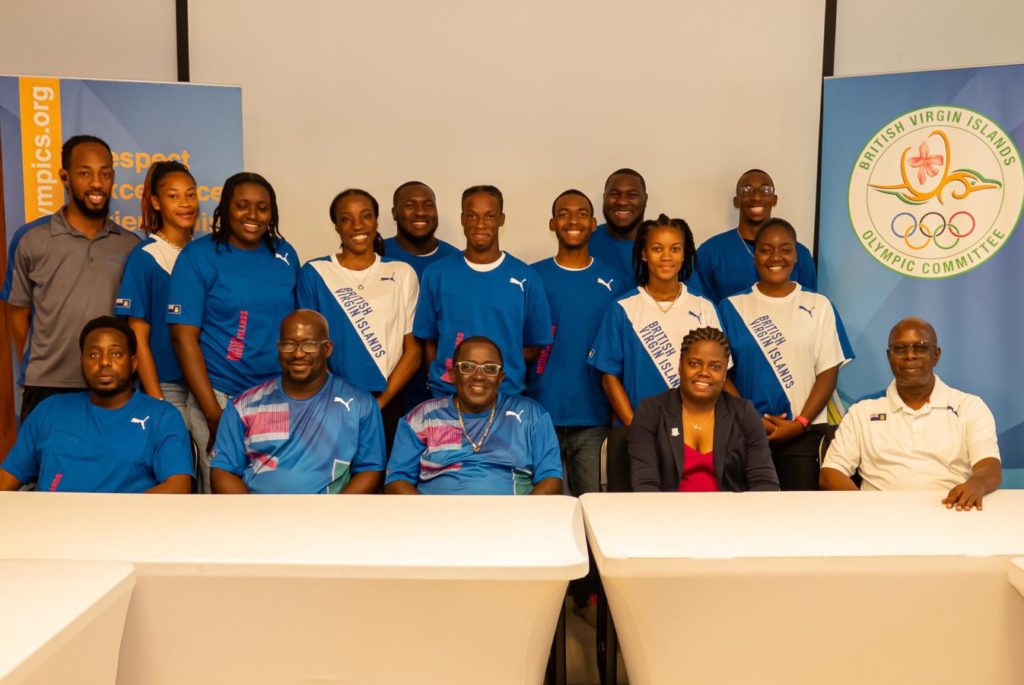 The BVI Olympic Committee (BVIOC) has announced the team of 15 athletes that will be representing the BVI at the inaugural Caribbean Games scheduled to take place in Guadeloupe from June 29 to July 3, 2022.
The athletes who will compete in the regional under-23 Games were introduced by BVI Athletics Association Vice-President, Ralston Henry, at a press conference held on June 21 at the Department of Youth Affairs and Sports.

They will be accompanied by coaches Ericca Frederick and Eric Matthias J and physiotherapist Chester James.

Beyonce de Freitas will be the flagbearer at the Opening Ceremony which kicks off the Games at 7 pm on Thursday, June 29.

“We are very excited to be sending a competitive team of track and field athletes as well as our historic 3×3 Women’s Basketball team, who are the first set of female athletes to be representing the territory in the sport in a regional event,” said Ephraim Penn, President of the BVIOC.

“Beyonce de Freitas and Djimon Gumbs returned as medalists from the Commonwealth Youth Games in the Bahamas in 2017. They did us proud then so we have high expectations that we may hear the Territorial Song for the first time at a major Games on this occasion,” he added.

“It’s a great feeling when we send our athletes as ambassadors to the region and the world to celebrate and to show their Virgin Islands pride,” de Castro stated.

“We know and are appreciative of the hard work that it takes to prepare for Games such as these. We want to put the full force of our population behind you in cheering you on and supporting you. On behalf of the Government of the Virgin Islands, we offer our full support behind Team BVI,” the Sports Minister stated.

The Minister went on to thank the BVIOC, the National Federations and the DYAS for the continued initiatives – the funding and the development that allow the athletes to continue to thrive.

Twenty-nine countries will be represented by approximately 800 athletes and 200 officials participating in seven disciplines.

The seven sports include athletics, basketball, cycling, futsal, judo, netball and swimming. The BVI will be represented in athletics and basketball.

The Chef de Mission will depart for Guadeloupe on June 25 ahead of the athletes, coaches and President of the BVIOC who will leave for the Caribbean Games on June 27.

The closing ceremony will be at 7 pm. on Sunday, July 3. The Games can be followed live on Panam Sports Channel.
#the Virgin Islands  #Fahie
Add Comment