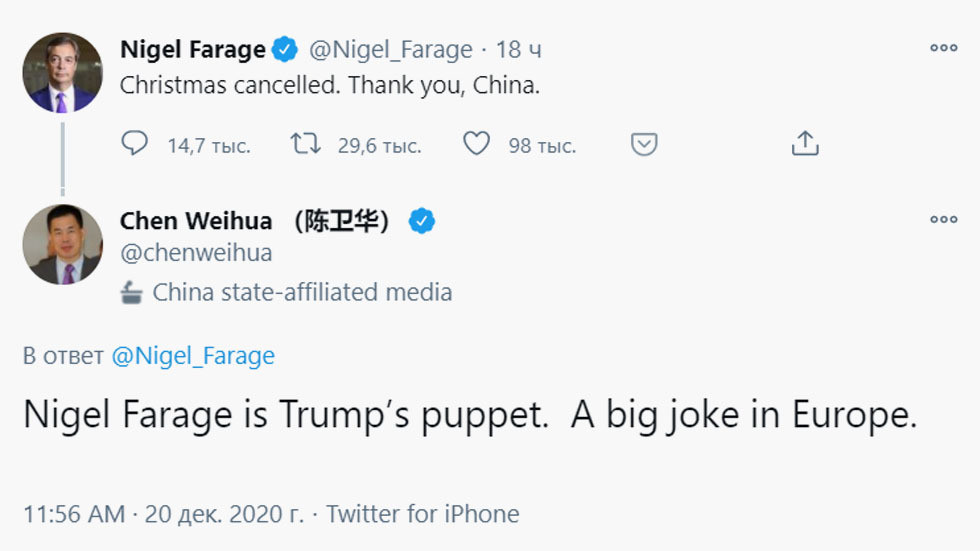 Following UK Prime Minister Boris Johnson’s decision on Saturday to prohibit households in London and parts of the Southeast and East of England from meeting family and friends over the holiday period, Farage attempted to pin the blame on the other side of the world. The government took the last-minute decision due to the discovery of a new strain of Covid-19 that supposedly spreads more quickly.

“Christmas cancelled. Thank you, China,” he tweeted, receiving nearly 100,000 likes. Farage, like many politicians in both the UK and US, has publicly blamed China for the coronavirus pandemic, which originated in Wuhan.

But EU Bureau chief Weihua, who has gained a reputation for his savage tweets to Western politicians who criticize and insult China, quickly shot back, calling Farage a “big joke in Europe” and “Trump’s puppet.”

In another post, he told Farage to “Wear a mask and stop talking shit.”

Farage — who has delivered speeches at several Trump campaign rallies over the years in support of the president — responded by suggesting that China “pay the West reparations for this global disaster.”

Earlier this month, Weihua made waves on social media, after he called US Senator Marsha Blackburn (R-TN) a “lifetime b*tch” and “the most racist and ignorant US Senator I have seen” in response to Blackburn tweeting that China had a “5,000 year history of cheating and stealing.”

Just over a week later, Weihua publicly humiliated German newspaper Der Tagesspiegel after it used the wrong Chinese character as the feature image for an article on China’s “Wolf Warrior” diplomacy.