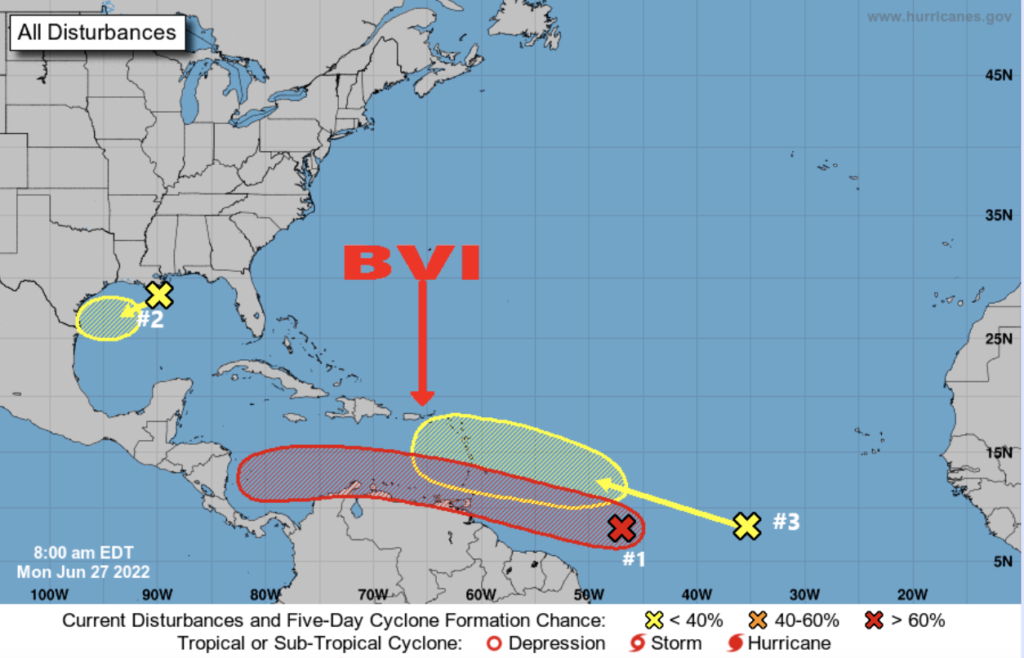 The Department of Disaster Management (DDM) is warning citizens to continuously monitor two tropical waves currently in the Atlantic Ocean heading for the Caribbean.
In a weather bulletin at 8 am on Monday, June 27, the DDM said one of the systems poses no threat to the Virgin Islands at this time so no watches or warnings were issued for the territory.

However, the department said people must continue to monitor the Atlantic in case of any changes.

The National Hurricane Center (NHC) out of the United States noted that the other system in the Eastern Tropical Atlantic is a tropical wave located several hundred miles southwest of Cabo Verde Islands and is producing disorganised showers and thunderstorms.

“Environmental conditions could become conducive for gradual development later this week while the system moves west-northwestward at around 15 mile per hour over the central tropical Atlantic,” the report said.

The path of this tropical wave is predicted to pass close by the Virgin Islands.

Meanwhile, the NHC said the other system located in the Central Tropical Atlantic is a tropical wave located about 900 miles east-southeast of the southern Windward Islands and is producing a large area of showers and thunderstorms.

“Environmental conditions appear conducive for further development, and a tropical depression is likely to form during the next couple of days before the system reaches the Windward Islands Tuesday night or possibly Wednesday while moving westward across the southern Caribbean Sea Wednesday through Friday,” the NHC said.

“A NOAA Hurricane Hunter aircraft is scheduled to investigate the system this afternoon. Interests in the Windward Islands and along the northeastern coast of Venezuela should monitor the progress of this system, and tropical storm watches or warnings could be required for portions of these areas later today,” the report continued.