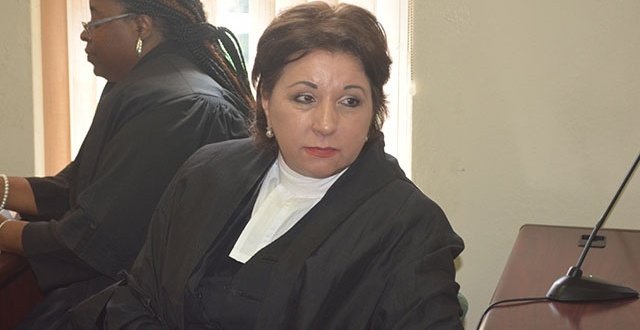 Deputy Public Prosecutor to resign to care for sick relative

Kim Hollis, a Queen’s Counsel who has served the territory since 2016, will resign as the director of public prosecutions in December.

Deputy Governor David Archer Jr. announced last week. Ms. Hollis has decided to leave her post so that she can care for an ailing family member, though she is committed to helping her successor become familiar with the role, Mr. Archer said in an Oct. 9 statement.

“Ms. Hollis’ wealth of experience will be missed,” he added. “As a territory, we’ve benefited not just from Ms. Hollis’ experience in the courtroom, but also from her leadership, as she has shared much with her team of prosecutors, the entities she advises within the government, and with the greater legal fraternity within the territory.”

Neither Ms. Hollis nor Mr. Archer could be reached for comment, and it is unclear who will succeed her.

Mr. Archer said he is saddened to see Ms. Hollis go, but he sees a “bright side” to her departure, as it allows other legal professionals to fill the post, and he encouraged residents to consider employment in the territory’s legal realm.

According to a July 2016 statement announcing her appointment, she was expected to “institute and undertake criminal proceedings against any person before any civil court in respect of any offence against any law force in the Virgin Islands [and] provide written legal advice to commissions, government ministries, and departments, as well as attend meetings to provide immediate oral [opinions] on legal matters.”

Before being appointed as DPP, in August 2016, Ms. Hollis had already enjoyed a lengthy career, according to the July 2016 statement.

“I wish to extend my personal thanks for the admirable work [Ms. Hollis] has put in at a demanding post,” Mr. Archer said, adding, “I wish her God’s blessings and a successful extended professional career.”

Good day to all in the Virgin Islands.

I am sad to share that Kim Hollis, a Queen’s Counsel who has served the Territory as the Director of Public Prosecutions (DPP) since 2016, has decided to leave the public service in December as a result of the need for her to take care of an ailing family member.

Ms. Hollis’ wealth of experience will be missed. I wish to extend my personal thanks for the admirable work she has put in at a demanding post. As a Territory, we’ve benefitted not just from Ms. Hollis’ skills in the courtroom, but also from her leadership, as she has shared much with her team of prosecutors, the entities she advises within the Government, and with the greater legal fraternity in the Territory.

The DDP has shared with me her personal commitment to offer any transitional support to the next holder of the post and I commend her for this professional gesture. For those rising through the legal profession, there is something of a bright side to Ms. Hollis’ departure: An opportunity now exists for the next DPP to rise to meet the challenge of this post and I call on others to consider employment with the Office of the Director of Public Prosecution and in other roles needed to ensure optimum functioning of this critical Office.

As we work toward achieving the goals of the Public Service Transformation Programme I look forward to the changes that we expect will emerge within the Office of the DPP as well as other legal departments of Government who play a critical role in advising Government members on a variety of legal issues.

Please join me in extending thank you to the Learned Kim Hollis, QC for the time she has committed to the office of the Director of Public Prosecution. I wish her God’s blessings and a successful extended professional career.