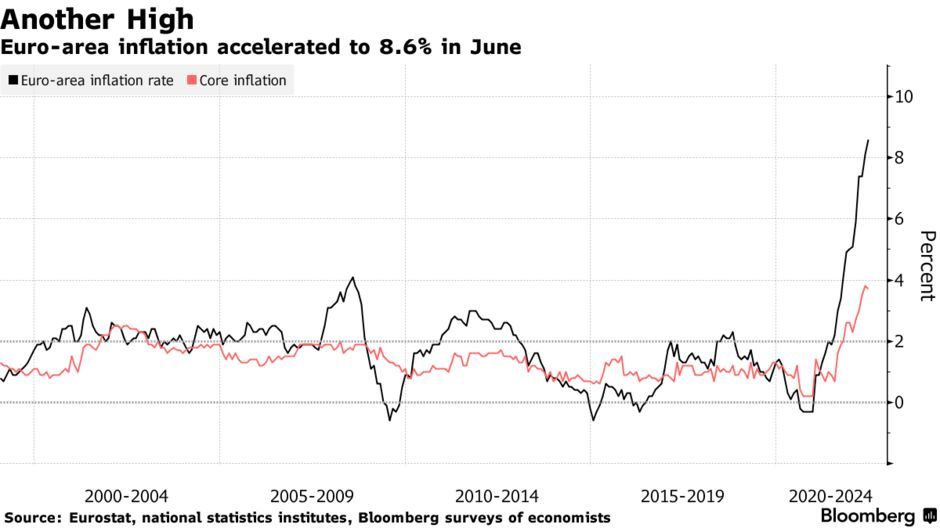 Euro-area inflation surged to a fresh record, surpassing expectations and bolstering calls for the kind of aggressive interest-rate increases being deployed by central banks across the world.

Driven once more by soaring food and energy costs, consumer prices jumped 8.6% from a year earlier in June -- up from 8.1% in May. Economists surveyed by Bloomberg saw a gain of 8.5%. The median estimate in the poll has fallen short for 11 of the last 12 months.

The data reflect an escalating squeeze on households and firms across the 19-member currency bloc, where France, Italy and Spain reported new all-time highs this week. Germany, the continent’s No. 1 economy, only saw a slowdown thanks to fuel-tax cuts and public-transport discounts that are temporary. In the Baltic region, price growth has shot past 20%.

Governments have weighed in with billions of euros in support, but their ability to help is limited after spending huge sums during the pandemic. As consumers grapple with the soaring cost of living, retailers like Zalando SE and Hennes & Mauritz AB are suffering. Sales at automakers such as Volkswagen AG have been sinking for months.

While on the brink of a first rate increase in more than a decade, the European Central Bank has faced criticism for letting inflation zoom so far beyond its 2% target as peers like the Federal Reserve unleash hikes that have reached 75 basis points.

Consumer prices are soaring across the euro area

The ECB blames Europe’s woes on a post-lockdown spike in energy costs that snowballed when Russia attacked Ukraine. While that relentless advance in prices has broadened, a gauge of underlying inflation, excluding energy and food, inched down to 3.7% in June.

German two-year yields -- which are the most sensitive to changes in interest rates -- were three basis points lower at 0.62%, having earlier risen to 0.69% while money markets trimmed tightening wagers, pricing 146 basis points of hikes by year-end.

With signs that expectations for future prices are headed higher, the ECB plans to raise its deposit rate by a quarter-point in July. Belgian central bank chief Pierre Wunsch this week called that move a “done deal” -- despite his Governing Council colleagues from Latvia and Lithuania urging tougher action to be an option.

The following ECB meeting is in September, with Friday’s data all but locking in the half-point rate hike that’s been lined up for then if the inflation backdrop doesn’t improve. That would bring the deposit rate -- currently -0.5% -- back above zero for the first time in eight years.

Beyond that, the ECB plans a “sustained” cycle of increases, though economic headwinds are strengthening. Manufacturers are reporting a steepening downturn in demand, a survey by S&P Global published Friday showed, while mounting fears of winter power outages if Russia limits natural gas supplies are raising the prospect of a recession.

“This surge in prices does not reflect excess demand in the euro area,” said Fabio Panetta, an Executive Board member who is one of the ECB’s most dovish officials. “Consumption and investment remain below their pre-pandemic level and even further away from their pre-pandemic trend. With wages rising at a moderate pace, real incomes have been severely hit by the surge in import prices.”
Add Comment