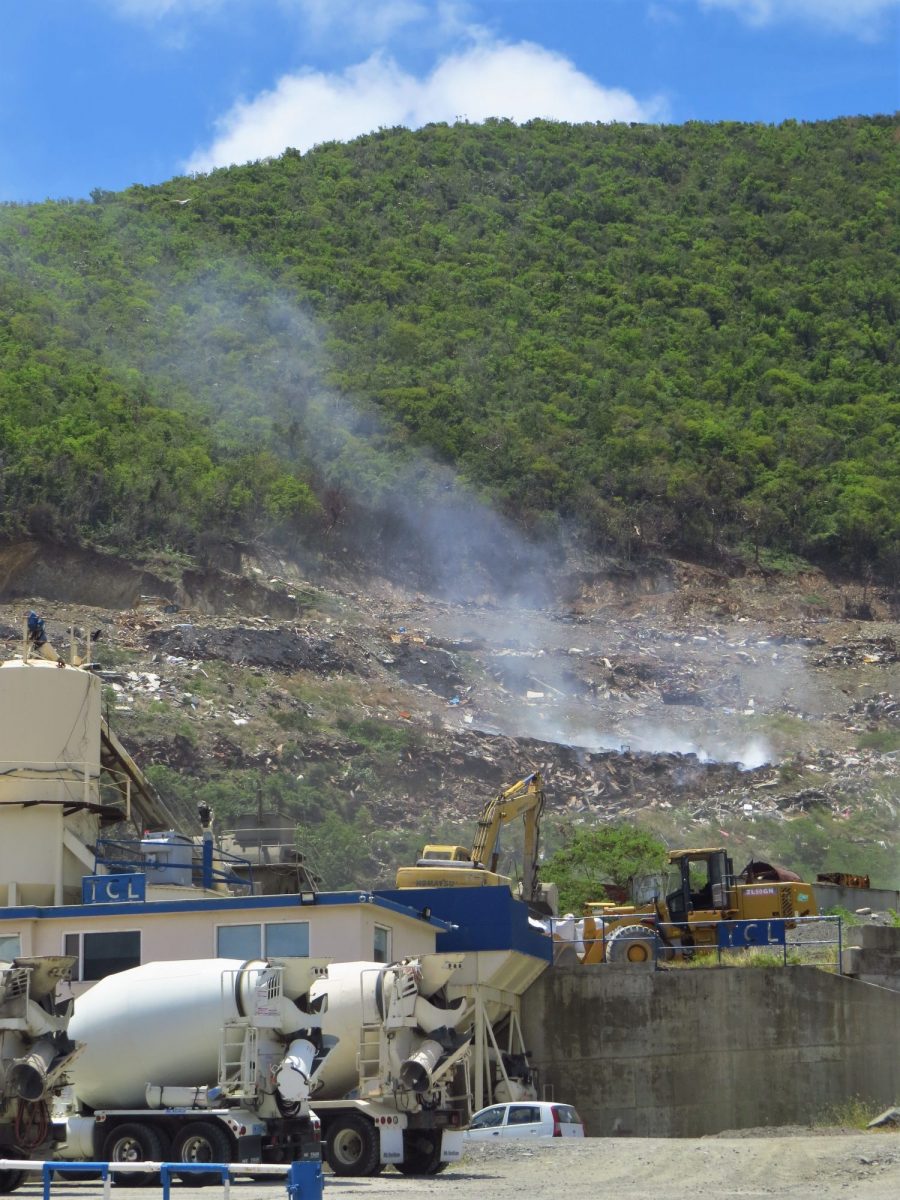 Fire breaks out in Pockwood landfill

Clouds of black smoke billowed from the landfill behind the Pockwood Pond incinerator after the area caught fire on Monday, but by the following day the flames had abated and the smoke rising from the landfill was a wispy white.

Staff members at the incinerator said that no one was harmed by the fire.

However, they added that they could not comment further without approval from the Department of Waste Management, and attempts to obtain further information from the DWM and the Virgin Islands Fire and Rescue Service were unsuccessful.

Spontaneous fires have been an ongoing issue at the landfill, and this was at least the second major blaze since January, when officials fired up the incinerator for the first time since it was damaged in a November 2018 fire.

While the incinerator was down, trash was landfilled on the hill behind the facility, where frequent fires resulted from spontaneous combustion.

As when another fire broke out in February, there was a decline in air quality in some areas of Tortola’s west end following the fire, according to PurpleAir, an air-quality monitoring network that maintains an online record of the airborne particulate matter picked up by sensors installed by customers in countries around the world.

The PurpleAir devices - two of which are installed in western Tortola - use the United States Environmental Protection Agency’s Air Quality Index to show different levels of air pollution using a scale of zero to 500.

On Monday morning, the Long Bay, West End sensor recorded a spike in air quality index values of 157, falling into the “unhealthy” range of 151- 200. At those values, anyone in the area could begin to experience health effects if exposed for 24 hours, and sensitive groups such as the young or elderly could see more serious health effects, according to EPA criteria.

Neither VI sensor recorded high values for an extended period of time.

West End residents have complained about toxic smoke from dump fires since long before the incinerator stopped working. Their concerns were exacerbated when the build-up of trash at the Coxheath dumpsite following Hurricane Irma caused fires that smouldered for about four months in mid 2018.

Previous fires have caused concern on neighbouring islands because of the thick plumes of smoke carrying over the water.

According to a Feb. 10 article in The St. Thomas Source, USVI residents complained of sore throats, headaches, and aggravated allergies from a recent fire.

The paper reported that Jamal Nielsen, special assistant to the USVI’s commissioner of the Department of Planning and Natural Resources, was in communication with the Virgin Islands government about the fires.

“Neilsen said DPNR officials have expressed their concerns on behalf of USVI residents,” according to the Source. “On Feb. 5, [DPNR Commissioner Jean-Pierre] Oriol spoke to the EPA on whether or not the agency could assist the BVI through its international program, Neilsen said. ‘They informed us they would look into the situation and determine what, if anything, they could provide.’”

Tortola resident Kirima Shameka wrote on Facebook in response to a video of the Monday fire, “The smoke only blows in my direction some days, but I can’t even imagine how persons who are affected daily are functioning. As an asthmatic and cancer survivor, I’m really concerned about what this is doing to our health.”

Mr. Malone said in October that a long-awaited pollution-control scrubber, which would filter potentially harmful particulates from the incinerator’s smoke, would be in place in the first quarter of this year. It still has not been installed.