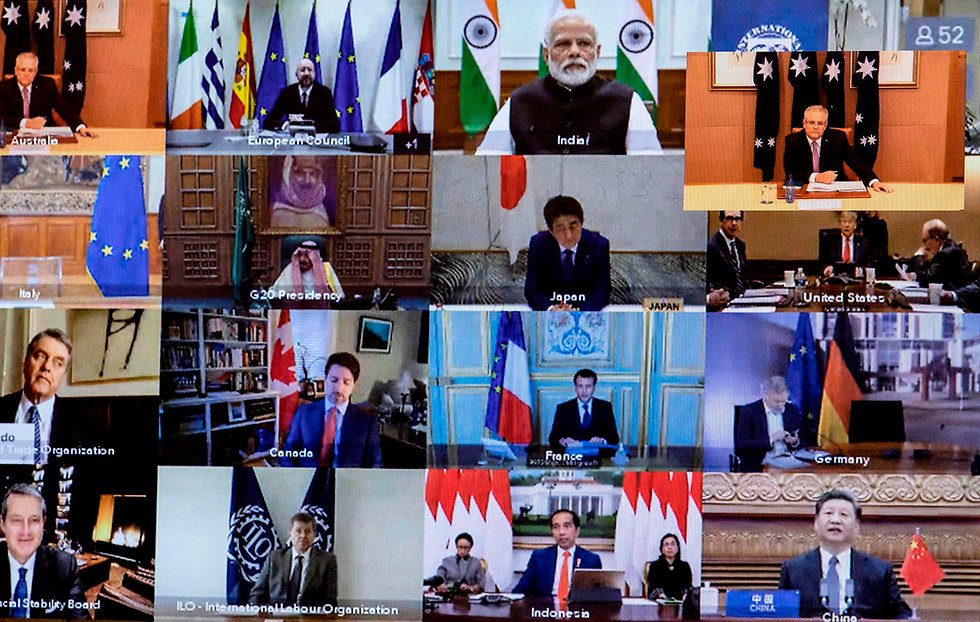 G20 leaders issue pledge to do 'whatever it takes' on coronavirus

G20 leaders have committed to do “whatever it takes” to minimise the social and economic damage of the coronavirus pandemic, in a largely unspecific and uncontroversial joint communique issued after a video conference call.

In a two-hour meeting the leaders agreed to assess gaps in pandemic preparedness and increase funding for research and development in vaccines and medicines, an area in which the G20 has shown an interest in the past.

A call by the International Monetary Fund (IMF) for a doubling of its funding to $2tn was not addressed specifically in the communique. The statement said G20 members had undertaken a $5tn stimulus through targeted fiscal policy and insurance schemes, and members would look to increase funding to multilateral bodies as required. Central bank governors were urged to draw up an action plan in conjunction with finance ministers.

G20 leaders, whose countries account for 80% of the world’s GDP, have been criticised for failing to produce a quick response to the pandemic of the quality of that in the aftermath of the 2008 financial crash.

Their summit was due to be followed by a virtual meeting of EU leaders, whose countries were rebuked on Thursday morning by the European commission president, Ursula von der Leyen, for “looking out for themselves” during the early phases of the crisis.


Taking an unusually critical tone, von der Leyen said the story of the past few weeks had been partly a painful one. “When Europe really needed an all-for-one spirit, too many initially gave an only-for-me response.”

She was referring to export bans on critical medical goods, as well as closures of borders, which have created delays in moving food and healthcare supplies around the bloc, especially in central Europe.

An internal report by von der Leyen’s team lamented that transport had been paralysed by border closures, leading to lorries being stuck in queues at EU internal borders for 24 hours. So far only three countries have followed the commission’s advice to create “green lanes” with minimal checks to speed up traffic. An EU statement is due later on Thursday.

The G20 communique said members were united in their response and they would use all available policy tools to minimise the economic and social damage, restore global growth, maintain market stability and strengthen resilience.

In an assertion of the relevance of multilateralism, the communique said the pandemic was “a powerful reminder of our interconnectedness and vulnerabilities”, and the virus “respects no borders”