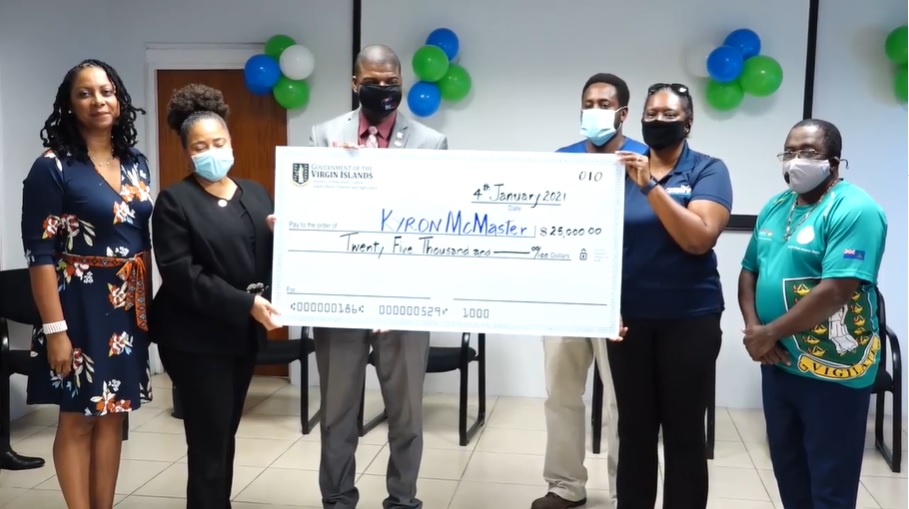 Government has issued cheques totalling $100,000 to four of the territory’s top senior athletes to assist with their journey to the Olympic Games which is set to commence in Tokyo, Japan, in July 2021.

Minister responsible for Sports Dr Natalio Wheatley made the disclosure during a recent ceremony which was held to hand over the cheques valuing $25,000 each, to the parents of Chantel Malone, Kyron McMaster, Eldred Henry, and Ashley Kelly.

Dr Wheatley said his government will be hoping to further contribute to the progression of the athletes once the economy performs in a manner that allows more funding to be available.

“While we know that when it comes to the expenses that is just a drop in the bucket, we certainly have plans to provide further funding if all goes well and we don’t have to shut down the Virgin Islands which we don’t want to do [and] which is very expensive. But if all goes well and we can source the resources, we certainly expect to be able to do something further for the athletes,” the minister said.

Very difficult for athletes to perform without funding

Dr Wheatley said the decision to fund the athletes came after the President of the BVI Athletic Association Steve Augustine along with some of the athletes met to discuss the financial difficulties that national athletes were experiencing.

“And of course, some of the athletes do get sponsorship but that can only take you that far. And when you have an injury, to be able to rehab from that injury is very expensive and you also have to maintain yourself. And of course, you must have a place to live and have food to eat and to be able to do things that we all do and it can get very expensive,” Dr Wheatley further explained.

Other countries already funding their athletes

While stating that the funding can go a long way in assisting the Olympic athletes in medaling at the games, President Augustine said the practice is something that is a norm for many other nations consisting of Olympians.

He said: “The truth is, other developing countries who have placed athletes on the Olympic podium have taken this initiative many years ago, and it’s only fitting that the BVI follows through and does the same.”

“On behalf of the BVI Athletic Association, our athletes and our every growing track family, I say nothing other than thanks to the government of the Virgin Islands for not just hearing, but taking the initiative in making their dreams a reality,” Augustine added.

The Olympic Games were originally scheduled for July 2020 but was rescheduled to the following year due to the spread of the COVID-19 virus which eventually became a global pandemic.

The new dates for the games are from Friday, July 23 to Sunday, August 8.