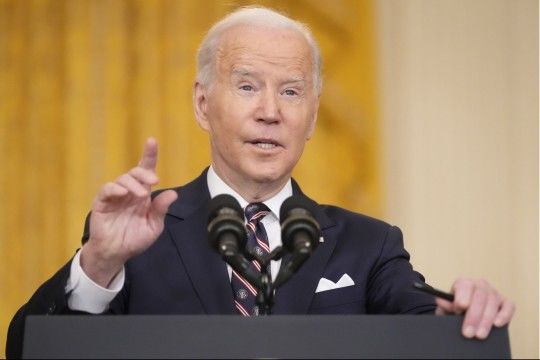 President Joe Biden on Tuesday afternoon unveiled the ‘first tranche’ of sanctions on Russia after acknowledging that Russian President Vladimir Putin started an invasion of Ukraine and has laid the foundation to go further.

‘He’s setting up a rationale to go much further. This is the beginning of a Russian invasion of Ukraine,’ Biden said of Putin.

‘Russia has now undeniably moved against Ukraine. Today, I’m announcing the first tranche of sanctions to impose costs on Russia.’

Speaking from the White House, Biden said the US is imposing ‘full blocking’ of two large Russian financial institutions.

‘That means we’ve cut off Russia’s government from Western finance,’ he said. ‘It can no longer raise money from the West and cannot trade in its new debt on our markets or European markets either.’

Biden also revealed ‘comprehensive sanctions’ on Russian debt and the nation’s elites and their family members.

‘They share in the corrupt games of the Kremlin policies and should share in the pain as well,’ Biden said of the family members.

Biden warned that the US is prepared to step up sanctions against Putin.

The US has joined its European allies in punishing measures against Russia. Germany on Tuesday said it will halt certification of the Nord Stream 2 gas pipeline connecting it with Russia. The UK declared it would sanction Russian Parliament members who voted to recognize the independence of Donetsk and Luhansk, two pro-Russia separatist regions of Ukraine.

‘This is the first tranche, the first barrage of what we are prepared to do,’ British Prime Minister Boris Johnson told the Parliament on Tuesday.

Biden acknowledged that the new sanctions could lead to higher gas prices for Americans and vowed to work to limit the impact at home.

‘Defending freedom will have costs for us as well and here at home,’ he said. ‘We need to be honest about that.’

‘We think this is, yes, the beginning of an invasion, Russia’s latest invasion into Ukraine,’ Finer said on CNN’s New Day show. ‘An invasion is an invasion and that is what is underway.’

Finer added that sanctions the White House announced on the two breakaway regions were just the ‘beginning’ of the US’s response. They were issued on Monday after Putin in a fiery speech recognized the so-called Donetsk and Luhansk People’s Republics.

Two European officials on Tuesday said that Russia had ordered troops into Ukraine, but Russia’s Foreign Ministry denied doing so. While there was no clear sign of a huge Russian military escalation in eastern Ukraine, many Ukrainians fled the separatist regions by bus.

Ukrainian President Volodymyr Zelensky urged his country to ‘keep a cool head’ and insisted he would not yield territory to Russia.