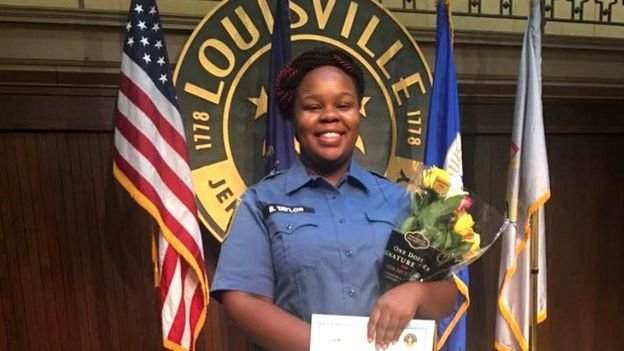 Louisville on edge before decision on police shooting of Black woman

Louisville, Kentucky, is under a state of emergency as prosecutors are expected to announce if police officers who killed a black woman in her home during a drug raid will be charged.

Mayor Greg Fischer said he had declared the measure "due to the potential for civil unrest".

Her name has become a rallying cry for anti-police brutality protesters.

Kentucky Attorney General Daniel Cameron is expected to announce any day whether his office will bring charges.

How is the city preparing?

Mayor Fischer's emergency declaration on Tuesday noted that protests have been held for over 100 consecutive days in Louisville.

The city leader, a Democrat, is authorising police to close traffic on certain streets where protests have been prevalent.

The mayor said he did not know what the attorney general would say.

He added: "Our goal is ensuring space and opportunity for potential protesters to gather and express their First Amendment rights after the announcement.

"At the same time, we are preparing for any eventuality to keep everyone safe."

Barricades are being erected around the city centre to reduce access to the area and the federal courthouse will be closed. The police department has cancelled leave requests.

Officers will be required to work 12-hour shifts, the Louisville Courier-Journal reported, citing an internal memo.

Interim police chief Robert Schroeder told reporters on Tuesday that an announcement in the case was expected this week.

"In the community, we have all heard the rumours," Chief Schroeder said. "We all know something is coming. We don't know what it is."

Governor Andy Beshear has said he is ready to deploy National Guard units in the event of violent protests.

What happened to Ms Taylor?

Shortly after midnight on Friday 13 March, she was in bed with her boyfriend, Kenneth Walker, watching a film when they heard a banging on the door.

Plainclothes Louisville police officers were carrying out a narcotics raid, and they used a battering ram to enter the property.

A judge had granted a warrant to search Ms Taylor's home because investigators suspected a convicted drug dealer - her ex-boyfriend, Jamarcus Glover - was using the address to receive packages. She had no criminal record.

Mr Walker, a licensed gun owner, later told police he thought the late-night intruder was Glover, according to the New York Times.

Mr Walker fired one round with his pistol, hitting one of the officers in the thigh. The officers returned fire, discharging more than 20 rounds.

Ms Taylor, who had also got out of bed amid the commotion, died on the hallway floor. Her death certificate records five bullet wounds.

The Louisville police officers had been granted a "no-knock" warrant that allowed them to enter the property without warning, although police said they had knocked and announced themselves at Ms Taylor's door.

Mr Walker and nearly a dozen local residents told local media that the officers had not identified themselves. But one neighbour said he heard one or more officers shout: "Police."

No drugs were found at the property, though Jefferson County prosecutor Thomas Wine has said the search was cancelled after the shooting.

What happened to the officers?

One of the three involved in Ms Taylor's death - Brett Hankinson - was fired from the force in June after investigators found he had "wantonly and blindly fired 10 rounds" into the apartment, according to his termination letter.

The other two officers who discharged their weapons that night, Sgt Mattingly and Myles Cosgrove, have been reassigned to administrative duties.

The Courier-Journal has reported that six officers are under internal police review for their role in the shooting.

Sgt Mattingly wrote an email on Saturday to more than 1,000 colleagues encouraging them and criticising their city leaders and protesters.

"Regardless of the outcome today or Wednesday, I know we did the legal, moral and ethical thing that night," he wrote in the message, which was published by media outlets on Tuesday.

"It's sad how the good guys are demonised, and the criminals are canonised."

"Your civil rights mean nothing," he added, "but the criminal has total autonomy."

What has happened since Ms Taylor's death?

Glover, who was arrested on the same night of her death for drug possession, has said prosecutors pressed him to name her as a "co-defendant" in the case against him.

In May, Ms Taylor's family filed a wrongful death lawsuit. It concluded in September with a $12m (£9.3m) pay out from the city.

The use of no-knock warrants has since been banned by Louisville's city council.

In the wake of her death, demonstrators have chanted "say her name" to raise awareness of her death, in addition to police killings of other African Americans, like George Floyd.

Celebrities and athletes have joined calls for the policemen to be charged. A magazine founded by US talk show host Oprah Winfrey has funded billboards around Louisville calling for the officers to be arrested.

Ms Taylor's case has been invoked in the presidential race ahead of the 3 November election. Democratic White House candidate Joe Biden has also called for the officers to be charged.

President Donald Trump, a Republican, has not referred directly to the case, but he has made a call for law and order a central plank of his re-election platform.