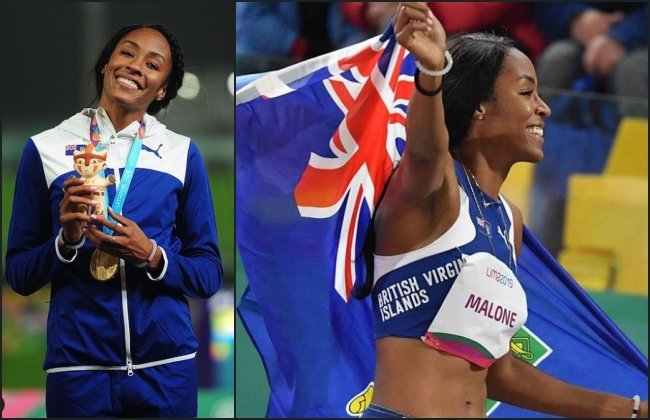 Long Jumper Chantel Malone has earned the British Virgin Islands its first-ever medal at the Pan American Games after nearly four decades. Competing in the 18th edition of the games in Lima, Peru on Tuesday, Malone, in the first round of the Women’s Long Jump final, leapt to a distance of 6.68 metres.

This was the jump that was enough to secure the gold medal for the BVI.

Malone edged out American Keturah Orji who placed second with a leap of 6.66 metres and Jamaica’s Tissanna Hickling who finished third with a best leap of 6.59 metres.

Not an easy road to victory

Following her superior podium-finishing performance, Malone was not shy about admitting the work and struggles that led up to sweet victory.

She lauded her coach Dwight Phillips for his role in helping her make the golden leap.

“It’s truly an honour to represent my country and be a representation of our resilience! None of this would be possible without my support system — you know who you are! Oh, let me tell you about the lows! They held my head above the water! Coach Phillips, thank you for not letting me drown in my self-doubt when everything felt like it was falling apart! You’re the best coach for me hands down!” Malone said in a post on social media.

President of the BVI Olympic Committee Ephraim Penn also commended Malone for her outstanding performance, which resulted in the territory finally achieving its goal of medalling since competing in its first games in 1983.

“I think it is a great achievement for the country and for Chantel in particular because of the struggles she’s had during the year. We always thought we had a good chance of winning a medal at these games. We didn’t know when are where, we just knew the calibre of athletes that came each had the potential to win a medal,” stated Penn who is at the games.

He added: “We still have a long way to go but it shows that with dedication and hard work, a lot can be achieved.”

Meanwhile, the other BVI athletes who also competed on that day had various results which were not sufficient to earn them a spot on the podium.

In the men’s shot-put final, local strongman Eldred Henry finished sixth by throwing a distance of 19.82 metres. In the Women’s 400-metre semifinal, Ashley Kelly finished eighth with a time of 54.42 seconds, which was not enough to advance to the final.

Thadd Lettsome had three races on the day. He finished 15th, 19th and 18th in the Men’s Dingy Opening Series races.

Lettsome will have a chance to improve his performances as he’s scheduled to compete in two other races of that series on Thursday, August 8, at 12 pm local time.