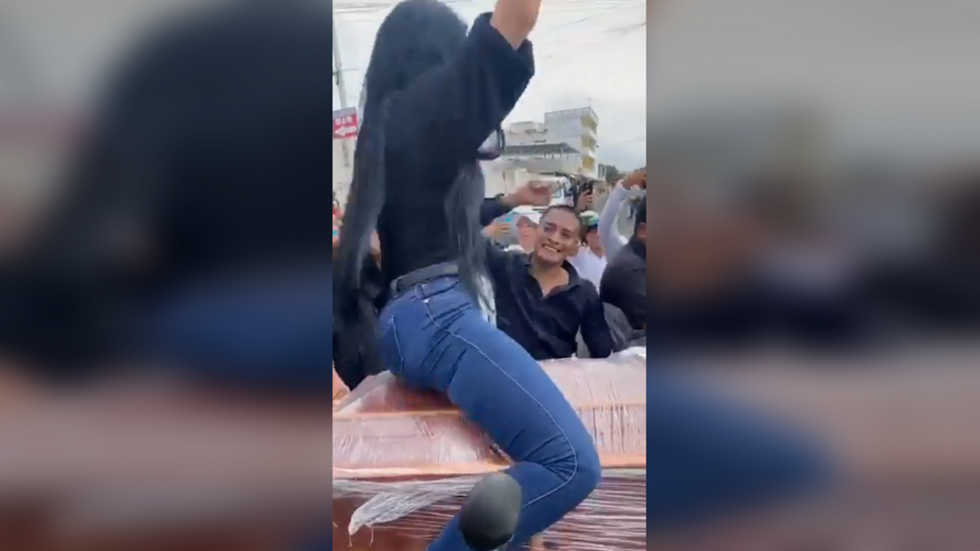 Funerals are usually a somber affair, but for one woman, the death of a loved one was a chance to hop on top of the coffin and twerk to say goodbye. A video of the bizarre funeral dance has gone viral.

Marlon Mero Quijije was shot to death last week in a dangerous area of Manabi, Ecuador, known as ‘Seven Stabbings.’ As the 38-year-old was laid to rest, a young woman believed to be his wife straddled his coffin and thrust her hips back and forth in a performance more suited to a nightclub than a funeral.

The coffin itself was balanced across two motorbikes, and the cheering crowd clearly appreciated the woman’s moves.

A Twitter user uploaded the video, along with the caption “If my funeral isn’t going to be like this, then I don’t want to die.” It’s since been viewed nearly 11 million times.

Towards the end of her performance, the woman leaned forward and placed a kiss on the deceased’s face, visible behind a glass screen at the head of the coffin.

The video sparked some heated conversation on Twitter, with some commenters calling it“disrespectful and inappropriate,” and others quipping "if yo girl don’t do this at yo funeral is she really yo girl?”

If my friends don’t do this for me then they don’t love me https://t.co/0kvXmBOV6v

Less than a week before Quijije was shot dead, a 34-year-old lawyer was gunned down several blocks away, according to Ecuadorian newspaper El Universo.

Bizarrely, it's not the first video of its kind. In 2017, a video of two mourners twerking over a coffin at a funeral in South America also went viral.