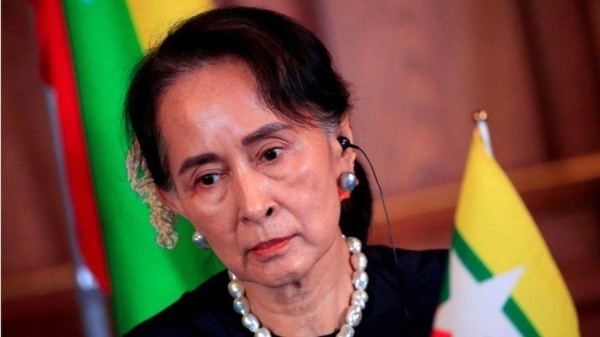 A court in military-ruled Myanmar has found former leader Aung Sun Suu Kyi guilty of corruption, the latest verdict in a series of secret trials.
Suu Kyi has been under house arrest since February 2021 when a military coup ousted her elected government.

The 76-year-old Nobel laureate has been charged with a raft of criminal offenses including voter fraud.

She denies all of the accusations and rights groups have condemned the court trials as a sham.

The closed-door hearings in the capital Nay Pyi Taw have been shut to the public and media, and Suu Kyi's lawyers are forbidden from speaking to journalists.

On Wednesday a junta court found her guilty of taking a $600,000 (£477,000) bribe in the form of cash and gold bars from the former head of Yangon, Myanmar's largest city and region.

She was sentenced to five years in jail, which takes her total prison sentence to 11 years, as she was previously found guilty for other offenses.

In December, she was convicted of inciting dissent against the military and breaking public health Covid rules. In January she was also found guilty of having contraband walkie-talkie radios in her house and breaching more Covid rules.

Suu Kyi still faces 10 other corruption charges, each carrying a maximum penalty of 15 years, as well as charges on electoral fraud and violating the official secrets act.

Her supporters say the charges have been trumped up by the junta regime to ensure Suu Kyi, who remains highly regarded in Myanmar as a democracy icon, is jailed for life.

If convicted on all her charges, she would face a total jail sentence of more than 190 years, by some estimates.

Civil rights and democracy groups, as well as the UN, have denounced the legal proceedings as a farce. Human Rights Watch has called it a "courtroom circus of secret proceedings on bogus charges".

Myanmar's military regime has dismissed such allegations, saying Suu Kyi has received fair trials and due legal process so far.

The military alleged voter fraud in the victory, however independent election observers said the elections were largely free and fair.

Suu Kyi - and many members of her party - are among more than 10,000 people who have been arrested by the junta since they seized power.

Nearly 1,800 people have been killed in the military's crackdown on dissent, according to the Assistance Association for Political Prisoners (Burma).

The chaos has also led to continued fighting. The military junta faces widespread opposition and some parts of the country are now engulfed in armed conflict.
#Covid
Add Comment