Myanmar: Thousands take to the streets of Yangon to protest against military coup amid internet blackout

Protesters - factory workers and students prominent among them - show their opposition to the army takeover.

Thousands of people have taken to the streets of Yangon to denounce Myanmar's military coup and demand the release of elected leader Aung San Suu Kyi and other leaders of her National League for Democracy.

It appears to be the largest demonstration since the power grab on Monday. 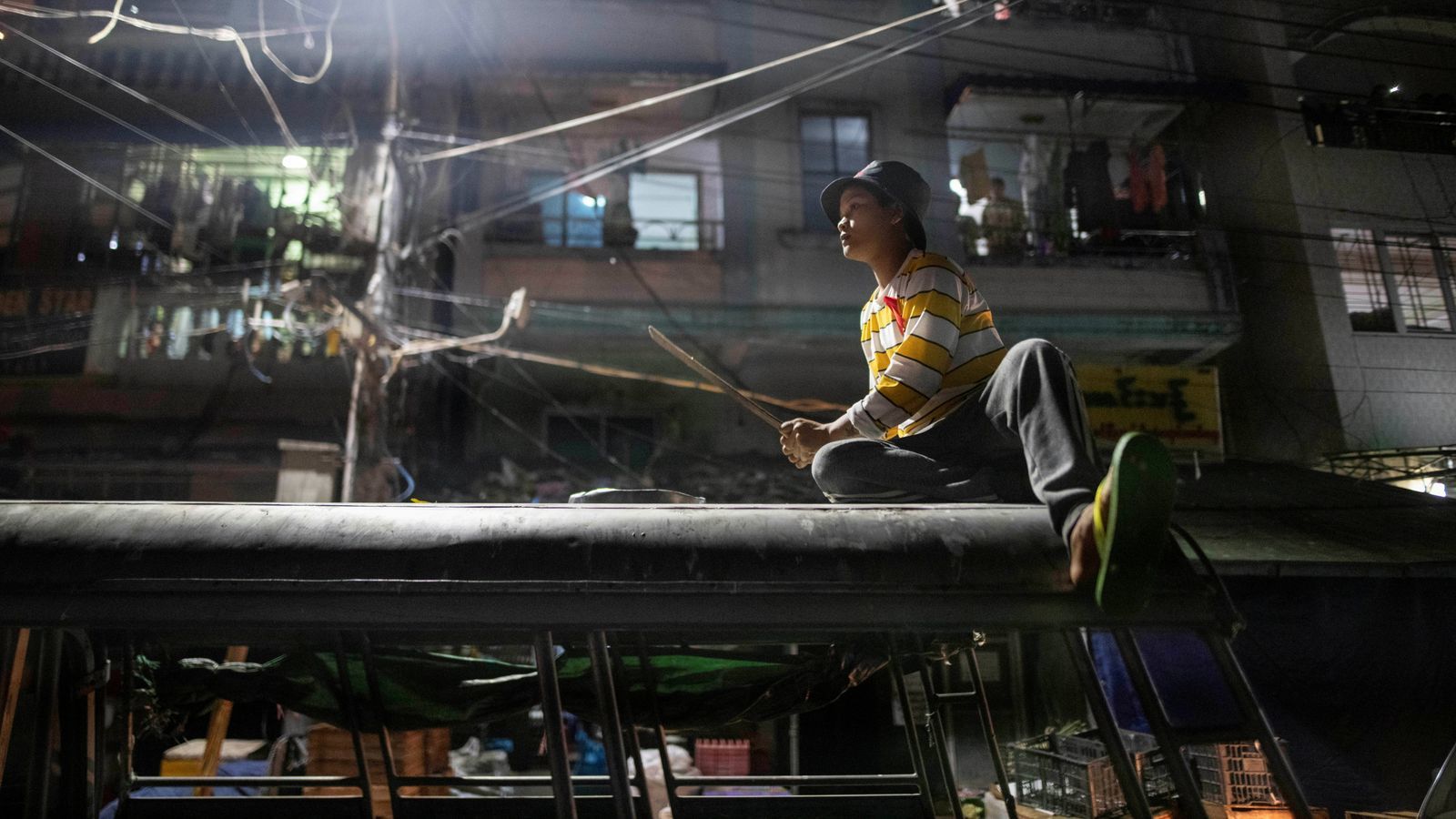 A young protester joins demonstrators in the commercial capital of Yangon

"Against military dictatorship" read the banner at the front of the march, as protesters chanted: "Military dictator, fail, fail; Democracy, win, win."

The protesters - factory workers and students prominent among them - marched on Saturday morning through the country's biggest city.

By noon, more than 100 police in riot gear had been deployed to block them from moving ahead. 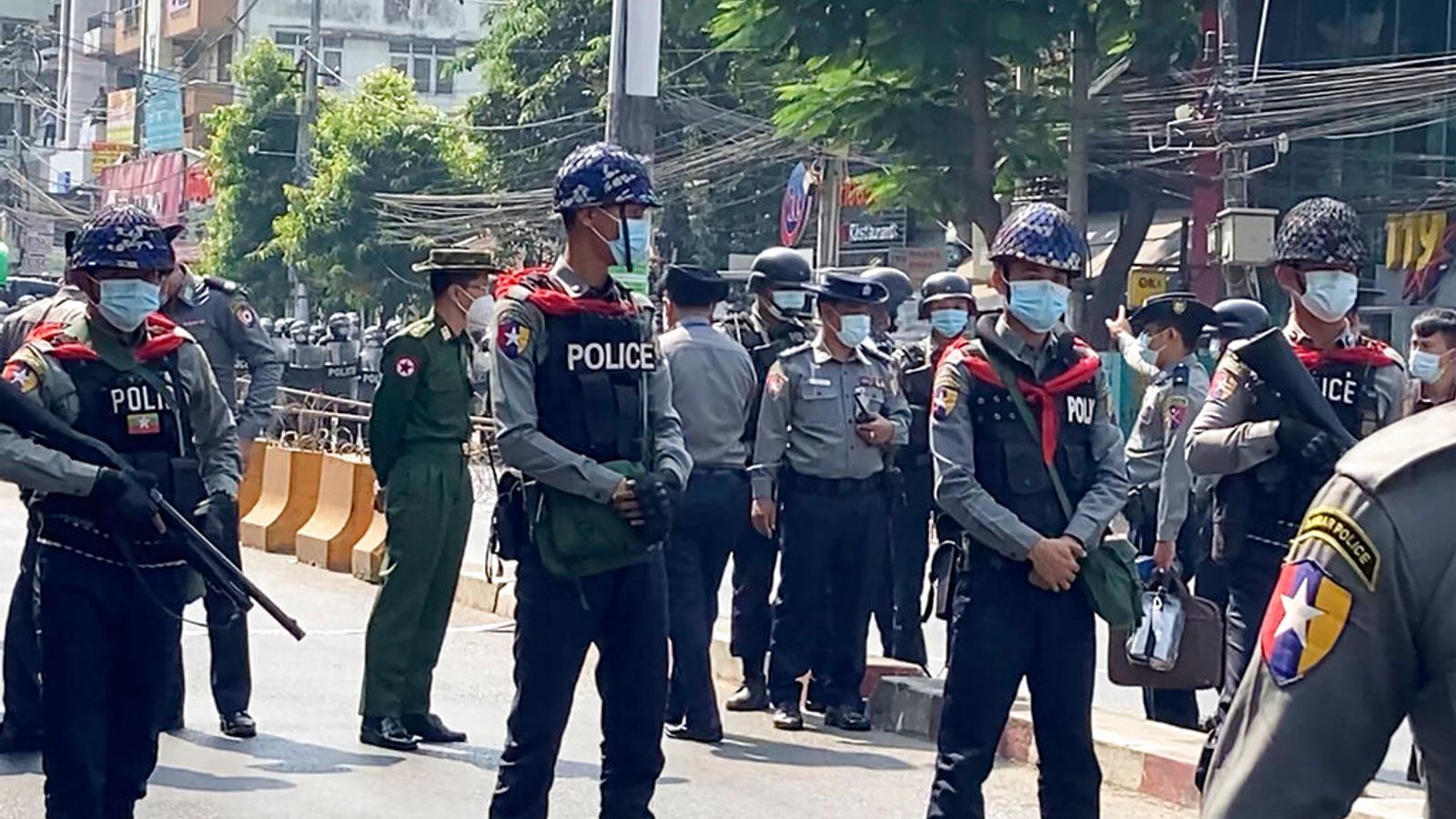 The military junta has tried to silence dissent by temporarily blocking Facebook and extended the social media crackdown to Twitter and Instagram on Saturday in the face of the growing protest movement.

Demand for VPNs has soared in Myanmar, allowing some people to evade the ban, but users reported more general disruption to mobile data services, which most people in the country of 53 million rely on for news and communications. 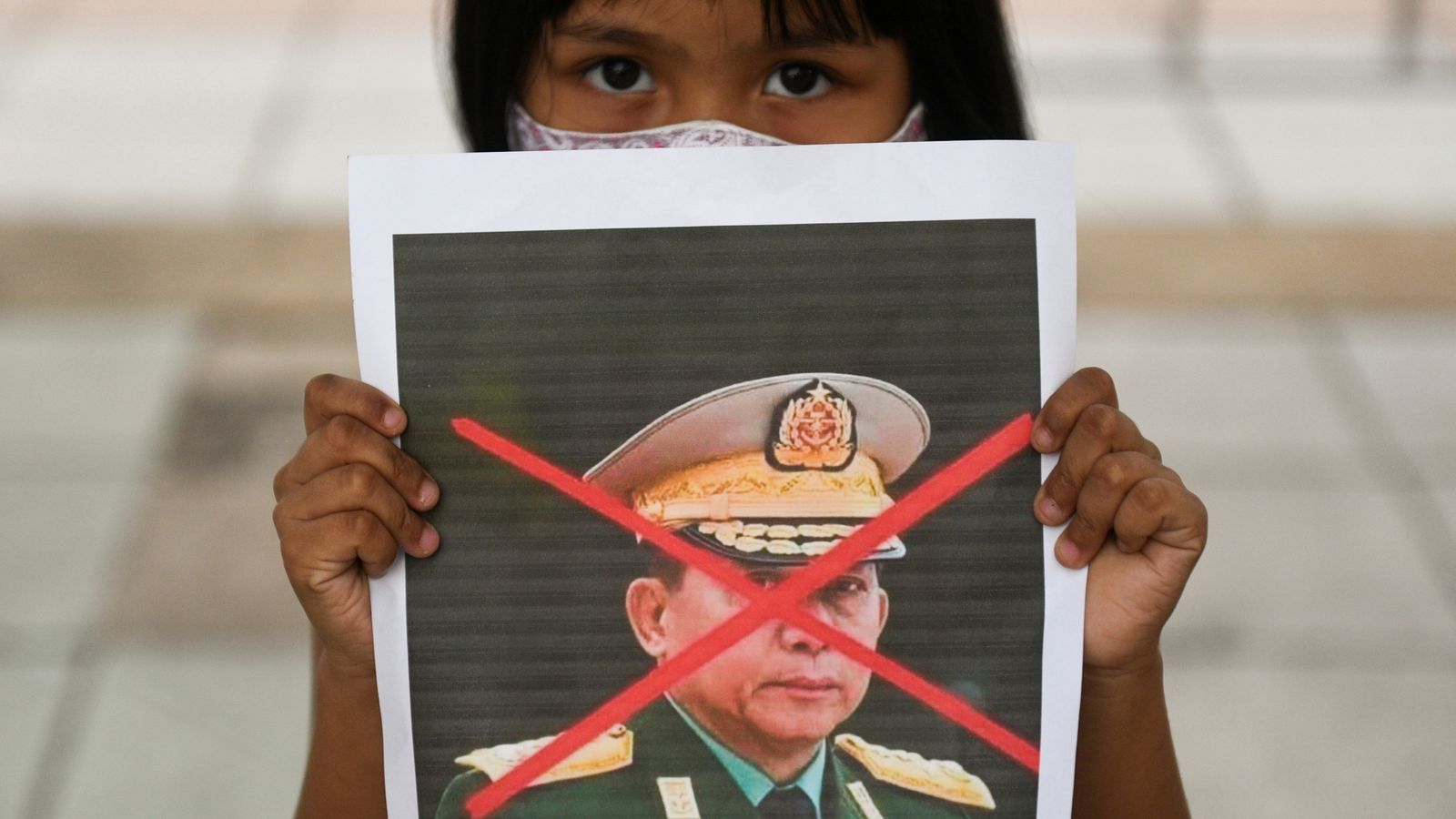 Army chief Min Aung Hlaing seized power alleging fraud in a November election that the National League for Democracy won in a landslide. The electoral commission dismissed the army's accusations.

The junta announced a one-year state of emergency and has promised to hand over power after new elections, without giving a timeframe.

The takeover drew international condemnation with a United Nations Security Council call for the release of all detainees and targeted sanctions under consideration by Washington. 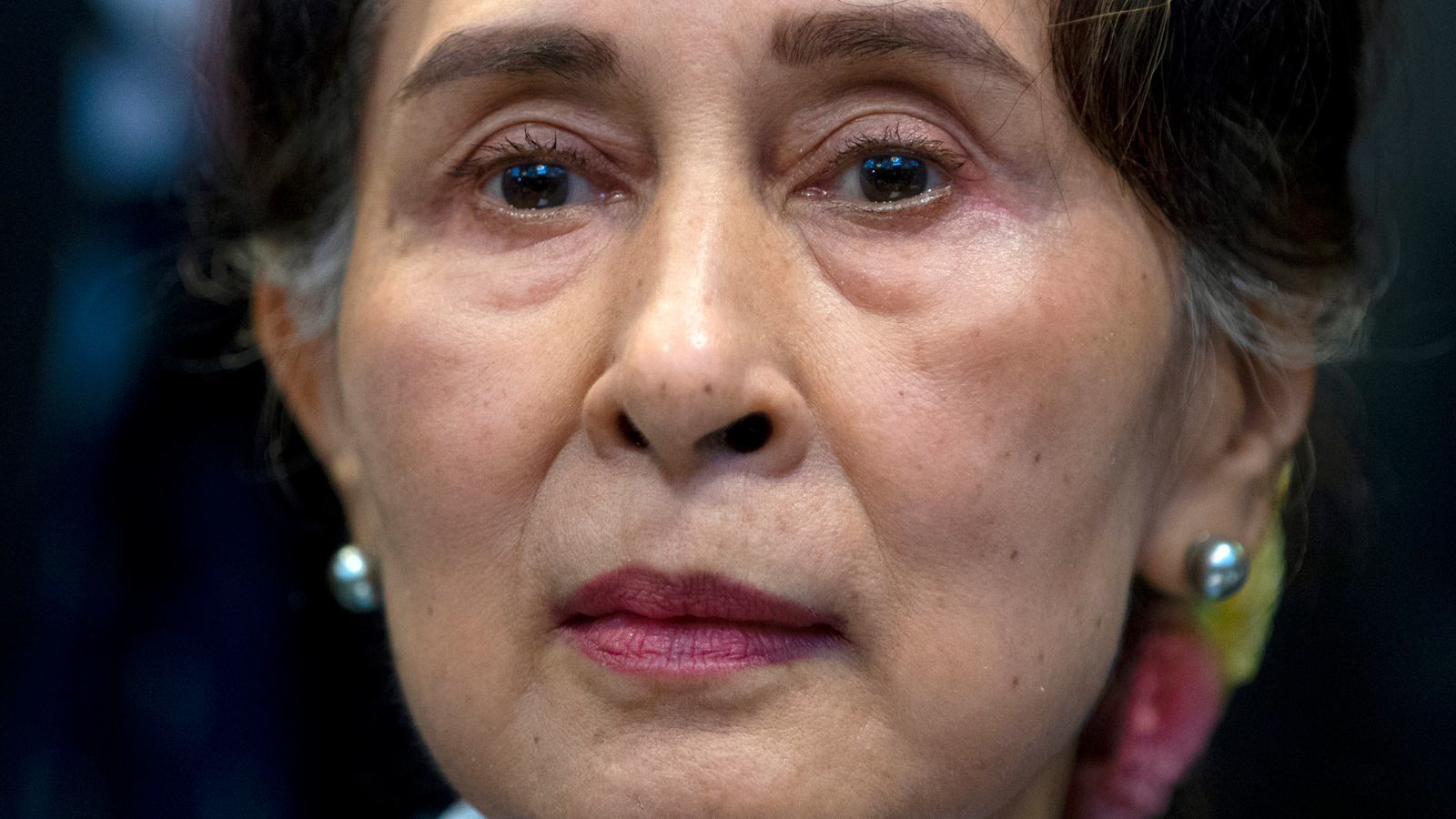 Ms Suu Kyi, 75, has not been seen in public since the coup. She spent some 15 years under house arrest during a struggle against previous juntas before the troubled democratic transition began in 2011.

A lawyer for Ms Suu Kyi and ousted president Win Myint said they were being held in their homes and were still being questioned.

"Of course, we want unconditional release as they have not broken the law," said lawyer Khin Maung Zaw, who is representing them both.

If Myanmar's generals thought they could silence democracy, they were wrong.

Yangon on Saturday saw the biggest protest since Monday's coup as thousands of people came on to the streets to demand their country back.

"Let the military dictatorship fall," they shouted, as they raised their hands in the three-finger salute of resistance. 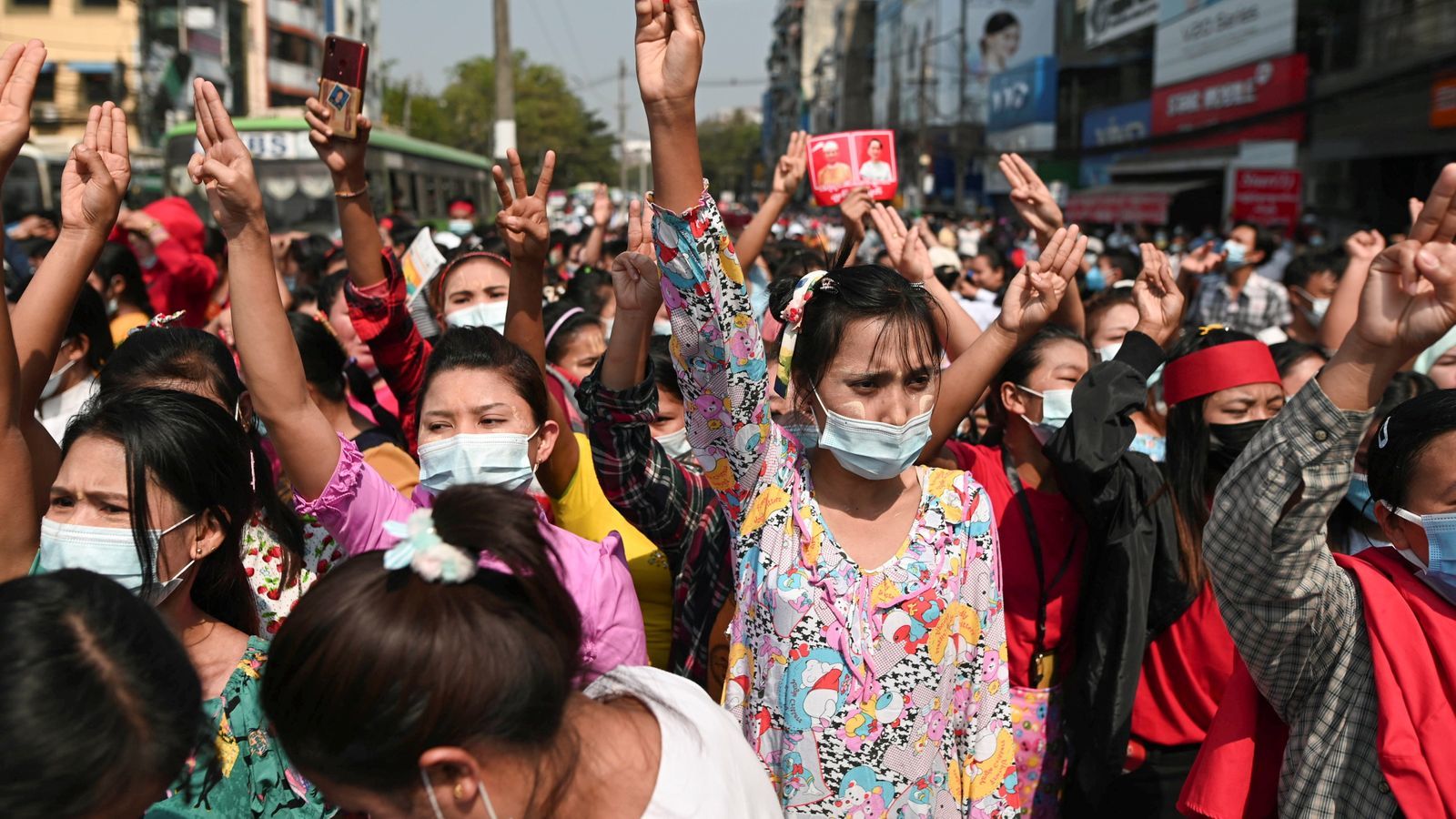 It's a symbol taken from the Hunger Games books and previously adopted by pro-democracy activists in Thailand before being picked up by protesters across the border.

But this wasn't the picture the military wanted the people of Myanmar or the outside world to see - unsurprisingly, it seems generals who stage a coup d'etat don't like push back.

When all that failed, to try to keep people off the streets, today they tried to shut down the internet completely.

"It really should be cause for great international concern and I cannot emphasise that strongly enough," Amnesty International spokesperson, Kayleigh Long, told Sky News.

"This is a military with a history of impunity and committing grave human rights violations. We're hearing of round-ups of people - there are activists, journalists and civil society members in hiding. The situation there warrants grave concern and urgent action."

The anger of pro-democracy supporters has been growing all week.

It started with a tentative banging of pots and pans but is now a deafening freedom song.

"I feel heartbroken," one man told us. "I feel sad that the military ignores our voices and wishes."

By turning the internet off, the military has effectively pulled the shutters down on the outside world and the picture inside grows even murkier.

Myanmar's democratic dream is gravely wounded but this week the people have shown they won't give in, they will fight to keep it alive

So far, violence has been avoided, but the country's new leaders have overseen crackdowns before - and there are growing fears they will strike brutally when their patience runs out.