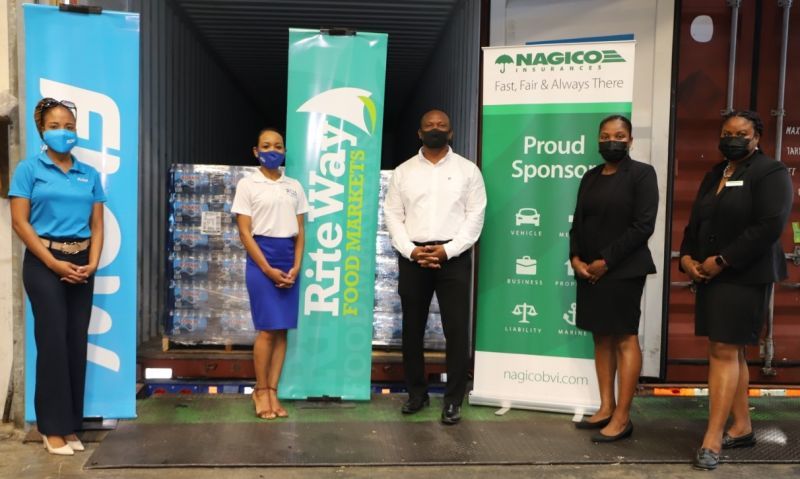 "The water is expected to arrive in St Vincent and the Grenadines in the next seven days, fulfilling a commitment to residents, many of whom have been forced to flee their homes since La Soufriere Volcano explosive eruptions commenced on April 9, 2021," the press release stated.

Stacey Roberts, NAGICO’s Sales and Retention Manager, said NAGICO Insurances here in the VI is pleased to be joining with RiteWay Food Markets, FLOW and Delta Petroleum to deliver much-needed clean water to the people of St Vincent and the Grenadines.

“Having experienced Hurricane Irma, we in the BVI share the deep sense of pain that the La Soufriere Volcano eruption has caused as persons have been forced to evacuate their homes. We also understand the need for a quick and decisive response to get basic food supplies and water to those affected by the eruptions given the huge demand at shelters along with the island’s inability to access water from normal sources due to ash,” Ms Roberts stated.

She added, “We are responding in a timely manner by providing a 40-foot container of water. We remind ourselves that as a BVI community we are a generous people. Despite the fact that we may still be recovering from two massive storms and coping with the global COVID-19 pandemic, we will always lend a helping hand to our Caribbean counterparts.”

It is predicted that further explosions and accompanying ashfall, of similar or larger magnitude, are likely to continue to occur over the next few days in St Vincent.

Experts say that the scale of the eruption is likened to that of 1902 in which there was massive destruction, unlike the eruption in 1979. It is predicted that further explosions and accompanying ashfall, of similar or larger magnitude, are likely to continue to occur over the next few days.

There have been widespread evacuations in areas known as the red zone. Hundreds of residents are in shelters and in need of basic supplies.

The Pan-American Health Organisation (PAHO) in their situation report stated that water supply has been shut off island-wide as the Central Water and Sewerage Authority (CWSA) reported that they are unable to abstract water from their sources, as the water is like a mud slurry caused by the persistent ash fall.

PAHO has warned that there is a real risk that water contamination could result in an outbreak of water-borne illnesses.