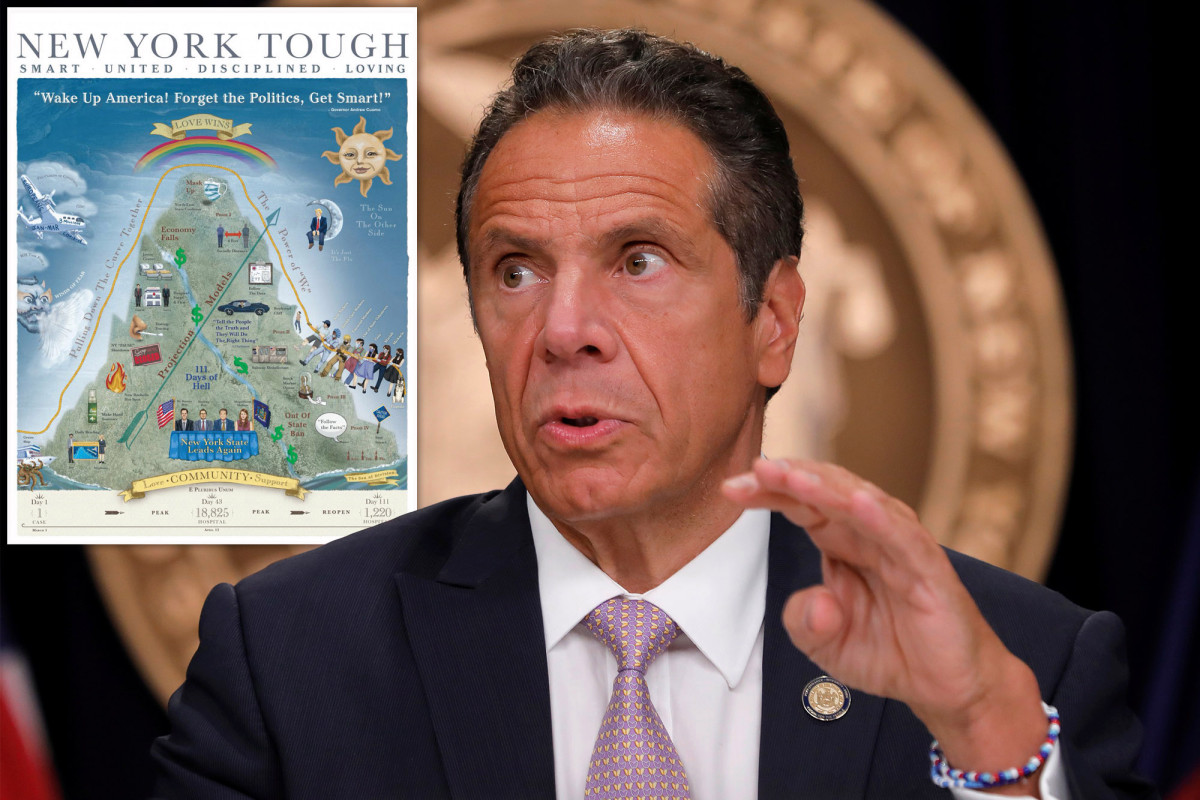 Gov. Andrew Cuomo went back to the old-style political campaign posters he loves so much to memorialize New York’s fight against the coronavirus pandemic with yet another self-centered painting that includes quotes from himself and even features his muscle car.

The illustration, unveiled in a Monday press briefing in Manhattan, depicts the steep toll that COVID-19 inflicted on the Empire State as a mountain, marking each major event and select policy decisions made during the outbreak with a symbol.

At the base, Cuomo depicts the initial hotspot in New Rochelle as an open flame. The decision to order New Yorkers to wear face coverings is illustrated with a mask placed near the summit. The state’s essential workers lower themselves down the other side of the mountain with a rope labeled “The Power of We.”

“We had to bend the curve despite those models,” he told reporters in Manhattan while showing off the new artwork. “From Day 1 to Day 111, it’s roughly scaled and then little visuals of what was going on.”

From top to bottom, Cuomo’s painting also celebrates Cuomo — and his response to a pandemic that’s killed an estimated 32,000 New Yorkers.

A slogan frequently included in the governor’s PowerPoint presentations — “New York Tough” is “Smart, United, Disciplined and Loving” — is included in large gray type at the top of the poster.

Cuomo then goes on to literally quote himself in the artwork, writing, “‘Wake Up America! Forget the Politics! Get Smart!’ – Governor Andrew Cuomo.”

The poster also includes his Pontiac GTO muscle car; the beau of one of his daughters is depicted dangling off a ledge labeled “boyfriend cliff”; and a quote from invented philosopher AJ Parkinson, offering a nod to his late father, former Gov. Mario Cuomo, who created the character.

Near the bottom of the painting, Cuomo included a depiction of himself sitting at the briefing table — draped with a blue cloth that reads “New York State Leads Again” — alongside his top aides: secretary to the governor Melissa DeRosa, budget director Robert Mujica and embattled state Health Commissioner Howard Zucker.

The latest painting, designed by Cuomo and painted by a commissioned artist, comes just months after he released a bizarre nautically themed poster that charted his first three terms in office as a ship sailing through the “Sea of Division.”