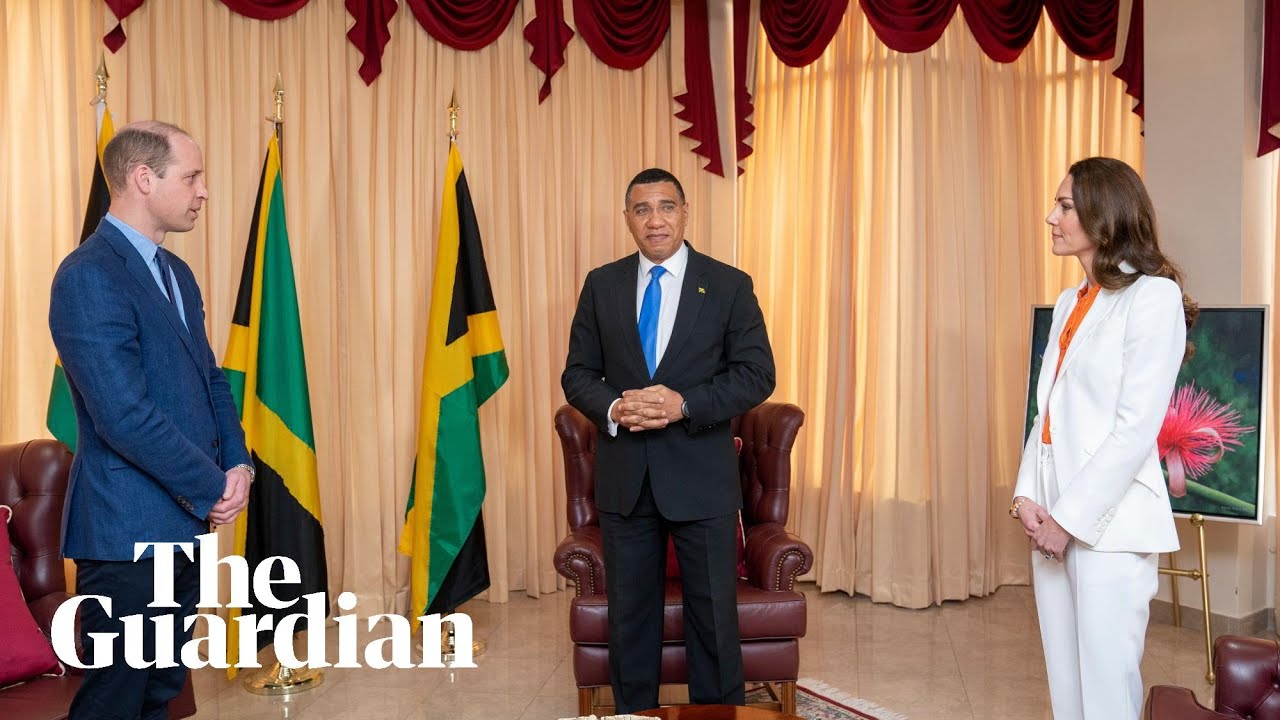 It was supposed to be a visit to mark the Queen’s platinum jubilee – a chance to present the modern face of the British monarchy to a region where republican sentiment is on the rise.

But it really didn’t turn out that way.

When the Duke and Duchess of Cambridge end their week-long tour of the Caribbean on Saturday, they will report back that the tour may have accelerated moves to ditch the Queen as the head of state.

Calls for slavery reparations and the enduring fury of the Windrush scandal followed them across Belize, Jamaica and the Bahamas – overshadowing a trip aimed at strengthening the Commonwealth and discouraging other countries from following Barbados’s example in becoming a republic.

Upon arrival in Belize, the couple were met with protests from villagers over a land dispute involving a charity William is a patron of. In Jamaica, the prime minister told them in an awkward meeting that the country would be “moving on” to become a republic, and a government committee in the Bahamas urged the royals to issue “a full and formal apology for their crimes against humanity”. 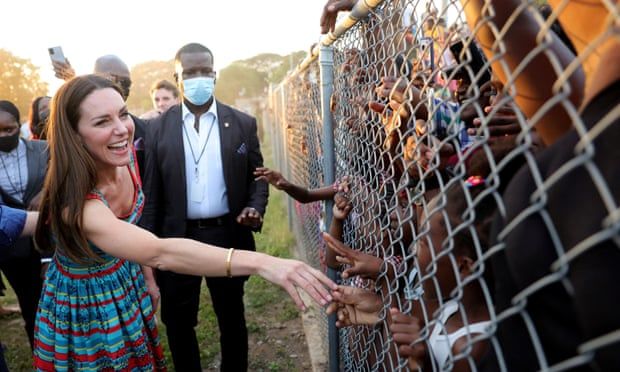 The Duchess of Cambridge shakes hands with children during a visit to Trench Town.

From photos of Will and Kate shaking hands with Jamaican children through wire fences, to the military parade in which the pair stood, dressed in white, in an open-top Land Rover, the optics of the visit has been described by local campaigners as a throwback to colonialism.
Advertisement

“This was another photo opportunity, and rather presumptuous to assume that Jamaican people were suddenly going to welcome William and his wife with open arms,” said Velma McClymont, a writer and former Caribbean studies academic who was born in Jamaica and was five when the country gained independence.

“My grandparents could trace generations back to slavery, but they died believing Jamaica was fully independent. Imagine, 60 years later and it’s still an extension of the British empire. It’s an infant colony, not standing alone.”

Followers of the trip in the UK may have gained a different impression. On Friday, the Sun reserved its front page for the tour, gushing that “Kate dazzles on Jamaica tour” and suggesting that the pair had “touched hearts”. On Wednesday, the Daily Mail splashed a photo of Kate, the “diving duchess”, scuba-diving with nurse sharks in Belize.

The same could not be said of the coverage in the Jamaican media. “It was dubbed in [the UK] media as a charm offensive, but I’m not quite so sure it came off that way. It wasn’t a royal failure, but I wouldn’t quite deem it a regal success either,” said Tyrone Reid, an associate editor at national newspaper the Jamaica Gleaner.

Reid added that local publications had devoted considerable column inches to the views of “a growing number of Jamaicans demanding the British monarch and British state apologise for and accept its role in the abhorrent slave trade of years ago.”

Royals experts, including one former palace PR, said that an enormous amount of planning went in to the visits, often starting years in advance. They are led by government in line with Foreign Office diplomatic, culture and commercial priorities.

Philip Murphy, a professor at the University of London and former director of the Institute of Commonwealth Studies, said that although the palace had “taken a relaxed view” about countries removing the Queen as head of state, “the British government has been less consistent about that” – ministers are thought to be anxious to preserve the soft power benefits of the Commonwealth after Brexit. 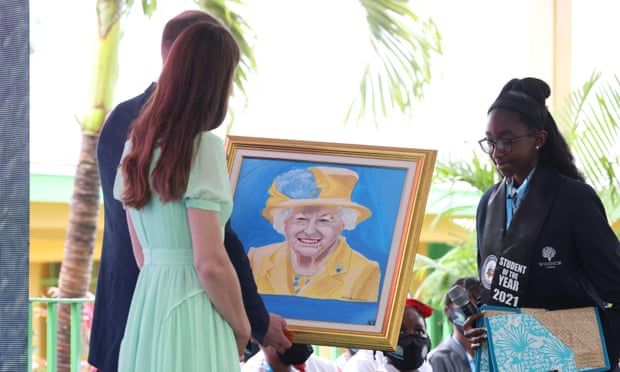 The Duke and Duchess of Cambridge view a portrait of the Queen during a visit to Sybil Strachan primary school in Nassau, the Bahamas.

Murphy pointed to the growing emphasis on the relationship between colonialism and racial oppression after the Black Lives Matter movement, along with damage to the royals’ reputations after Meghan Markle’s accusations of racism and the British government through the Windrush scandal. “All of those things make it politically very difficult to stage this visit at this time. You’ve got the makings of a perfect storm,” he said.

A better approach to the trip, said Prof Trevor Burnard, director of the Wilberforce Institute for the Study of Slavery and Emancipation at the University of Hull, would have been for the royals to go prepared to directly acknowledge and apologise for the family’s role in the slave trade, including through memorial visits to sites connected with slavery, such as Kingston harbour, to express sorrow instead of upbeat photo ops.

“They should recognise that members of the royal family from Charles II to William IV were involved with and supported slavery and the slave trade, and that this is part of their past.”

Although a “quiet minority” in Jamaica were supportive of the Queen as head of state, there was “a great deal of antipathy and resentment toward the monarchy”, said Cynthia Barrow-Giles, a professor at the University of West Indies who has researched the British monarchy in the Caribbean. “[The visit] smacks of political opportunism and is disturbingly self-serving,” she said.

Many members of Commonwealth countries in the Caribbean are increasingly questioning its purpose, especially since they have received little support during the pandemic, which has devastated the Jamaican economy and left 120,000 children out of school, and are pointing to unequal access to vaccines, which has resulted in nearly 3,000 deaths in an island of 3 million people.

Jennifer Housen, a lawyer in Jamaica, said the fact the UK revoked visa-free access for Jamaicans in 2003, with applications regularly refused, had led people to feel “the relationship is pointless”. 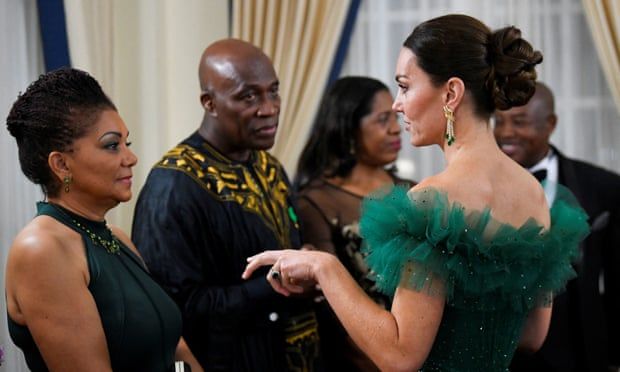 The Duchess of Cambridge attends a dinner hosted by Patrick Allen, governor general of Jamaica, at King’s House, Kingston, Jamaica.

“These are discussions we need to be having with them – not pretty flags and smiling black children pushing their hand through chain fences to say: ‘Oh, you know, I’ve touched the royals’; that’s garbage, that’s fostering something that is completely cringeworthy.”

The reparations movement has been growing considerably over the Caribbean in recent years, led by the 15-country strong intergovernmental Caricom Reparations Commission.

Rosalea Hamilton, one of the campaigners for Advocates Network who organised slavery reparations protests in Jamaica, said there was currently a “heightened consciousness of the history”, including “understanding of the legacies of colonialism today, economic, sociological, psychological”. There was, she said, an increased awareness that this had led to trauma in the population that affected confidence levels, along with swathes of the population living in “unhealthy, unsanitary, unsafe” conditions.

Reid said the reparations movement had been “gathering significant steam” in part because of increased access to information about Jamaica’s history that went beyond the school textbooks that had traditionally taught a British interpretation of history.

“The man on the street is demanding reparations as well, it’s not just at the intellectual level. That’s when you know something is really gathering momentum, when it’s spreading across a broad section of society. More people are recognising the horror of slavery and the atrocities that were committed, and becoming aware of the impact that has on modern day life.”