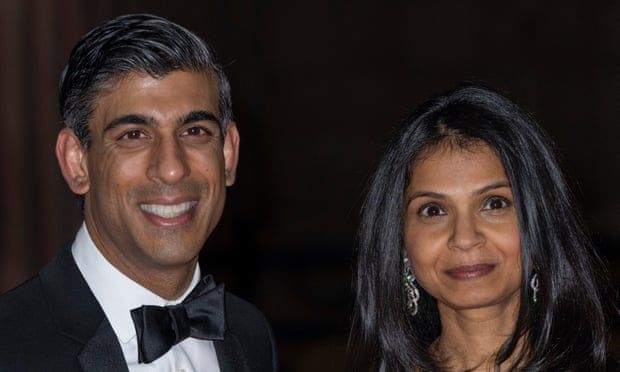 Akshata Murty says she realises many felt her arrangements were not ‘compatible with my husband’s job as chancellor’ (her husband rips you off with taxes, while his wife and obviously his own household evading taxes)

Rishi Sunak’s wife, Akshata Murty, bowed to pressure to pay UK taxes on Friday night, after Boris Johnson said he had been unaware she was a “non-dom” and fresh questions emerged over the couple’s tax affairs.

With Sunak’s position under increasing threat, Murty said she realised many people felt her tax arrangements were not “compatible with my husband’s job as chancellor”, adding that she appreciated the “British sense of fairness”.

She will pay tax on all worldwide income in future and for the last tax year, but not on backdated income, which could have saved her an estimated £20m of UK tax on foreign earnings from her billionaire father’s Indian IT company.

However, her decision is unlikely to stop the scrutiny of Sunak and Murty’s tax affairs and financial interests, with calls from Labour and the Lib Dems for an investigation into whether Sunak has broken the ministerial code by failing to be transparent.

Sunak was on Friday forced to confirm he had a US green card– meaning he had declared himself a “permanent US resident” for tax purposes for 19 months while he was chancellor and for six years as an MP.

A source close to the couple also confirmed Murty held a green card as well.

The disclosure appears at odds with Sunak’s defence of his wife being a non-dom – he said she intended to one day return to live in India.

The Guardian has also discovered the Treasury last week brought in a new low tax scheme that is partly designed to benefit some wealthy non-dom investors – just days before Sunak’s national insurance rise hit millions of working people at the height of a cost of living crisis.

The new laws specifically mention fund manager non-doms as a category of people who can benefit by not having to pay tax on foreign earnings through the new vehicles.

The Treasury had previously claimed Sunak had made no changes to non-dom policy since 2017, raising new questions over whether the Treasury was fully informed about Sunak’s family’s tax arrangements when formulating policy. 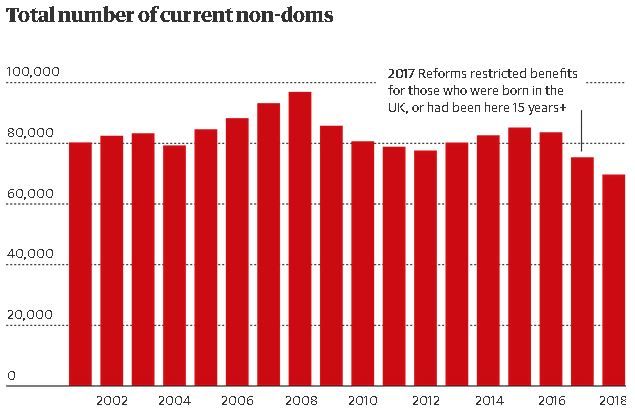 In a press conference on Friday, Johnson admitted he had not been told about Murty’s non-dom status. But he denied anyone at No 10 was briefing against the Sunaks, and praised the chancellor for doing an “outstanding job”.

However, Downing Street insiders revealed that an away day this week descended into acrimony between No 10 and No 11 aides, over the source of the Murty leak and longstanding tensions over the Partygate scandal.

Tory MPs said they believed it was possible Johnson could seek to move Sunak from the Treasury in a summer or autumn reshuffle if he survives the current crisis threatening his chancellorship.

The revelations have prompted a political outcry over Sunak’s lack of transparency about his wife’s financial affairs.

While promising to pay UK tax on all income, Murty will retain her non-dom status, which could in future allow her family to legally avoid an inheritance tax bill of more than £275m.

In her statement, Murty said she did not want her non-dom status to be a “distraction” for her husband.

“For this reason, I will no longer be claiming the remittance basis for tax,” she said. “This means I will now pay UK tax on an arising basis on all my worldwide income, including dividends and capital gains, wherever in the world that income arises. I do this because I want to, not because the rules require me to.

“These new arrangements will begin immediately and will also be applied to the tax year just finished.”

Murty and Sunak also own four properties worth more than £15m in total, and she also holds substantial investments in other companies.

It is understood Sunak and Murty, who own a £5.5m California penthouse holiday home, have donated $3m (£2.3m) to a US university in recent years.

The chancellor’s spokesperson insisted that under US law “you are not presumed to be a US resident just by dint of holding a green card”.

She said Sunak followed all guidance and continued to file US tax returns, but specifically as a non-resident, in full compliance with the law.

“As required under US law and as advised, he continued to use his green card for travel purposes. Upon his first trip to the US in a government capacity as chancellor, he discussed the appropriate course of action with the US authorities. At that point it was considered best to return his green card, which he did immediately.

“All laws and rules have been followed and full taxes have been paid where required in the duration he held his green card.”

Holders of green cards are required to pay US tax on their worldwide income – and also to make a legal commitment to “make the US your permanent home”.

They are required to file annual US tax returns, and are “responsible for reporting your income and paying taxes on any foreign earned income”. This raises the suggestion that Sunak may have been required to pay US tax on his publicly funded MP’s salary.

Under non-dom rules, Murty did not legally have to pay tax in the UK on the estimated £11.5m in annual dividends she collects from her stake in Infosys, her billionaire father’s IT business. UK tax residents would be expected to pay about £4.5m in tax on the dividend payment.

Murty has said she paid tax on the dividends overseas, but has refused to state how much she paid or in which country. She has previously collected other shareholder income via the tax haven of Mauritius, which does not tax dividends.

His letter said: “How could the man who is responsible for UK tax policy regard any permanent residency status for the United States as acceptable? This would be a huge conflict of interest – and a serious breach of the ministerial code.”

Sunak earlier told the Sun that Murty “loves her country like I love mine”, and said she had always been domiciled in India. He said she was entitled to use the non-dom arrangement as she was an Indian citizen and planned to move back to her home country to care for her parents.

Under non-dom rules, Murty previously paid £30,000 a year for the right not to pay UK tax on her overseas income. The status would have automatically ceased once she has resided in Britain for 15 years, a milestone it is understood she will reach in 2028.

On the tax breaks for fund manager non doms, a government spokesperson said the new regime “was consulted on widely and voted through by a majority in the House of Commons”.

They added: “It was introduced as part of a review aimed at boosting UK competitiveness – ensuring that taxes paid by those institutions affected was proportionate to other jurisdictions, enabling the UK to remain as an attractive place to invest and create jobs.”