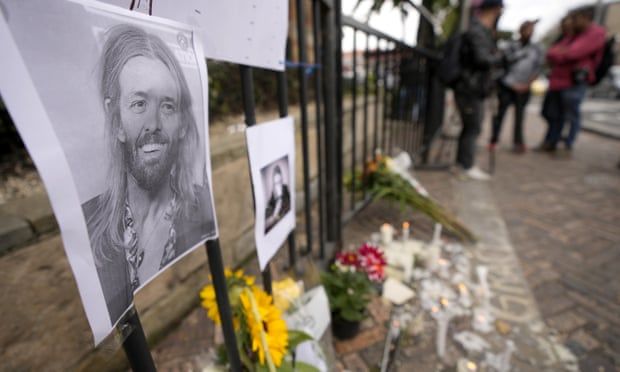 The Foo Fighters drummer Taylor Hawkins had at least 10 substances in his body when he died suddenly in Bogotá, according to a preliminary toxicology test carried out by Colombian authorities.

The 50-year-old musician was found dead in his hotel room on Friday afternoon, hours before the band was due to perform at Colombia’s Estéreo Picnic festival as part of its South American tour. The Grammy award-winning group had then been due to headline one of Brazil’s biggest music festivals on Sunday night.

On Saturday, Colombia’s attorney general’s office said analysis of Hawkins’ urine found traces of marijuana, opioids, tricyclic antidepressants and benzodiazepines, which can be used to treat insomnia or anxiety.

The Colombian magazine Semana claimed Hawkins died after a sudden cardiac arrest caused by an overdose of heroin, antidepressants and benzodiazepines. The magazine said forensic medical experts had been shocked by how swollen the musician’s heart had become.

Hawkins’ death sparked an outpouring of grief in Bogotá, where the news was broken to tearful festivalgoers by the Black Pumas singer Eric Burton, who asked the audience to observe a moment of silence.

Fans gathered outside the Four Seasons hotel, where the musician died, to light candles, leave flowers and sing some of the band’s songs. There was applause as Hawkins’ body was removed from the building by police.

Some of the world’s most famous musicians paid tribute to the drummer, who decided to pick up the sticks after his mother took him to see a Queen rock concert in 1982. Hawkins played with Alanis Morissette for two years before joining the Foo Fighters in 1997.

“No. It cannot be,” the Queen guitarist Brian May wrote on Instagram. “Heartbroken. Taylor, you were family to us. Our friend, our brother, our beloved child. Bless you. We will miss you so bad.”

“So incredibly sad to hear of the passing of Taylor Hawkins,” tweeted Mick Jagger. “My thoughts are with his family and the band at this time.”

Ozzy Osbourne called Hawkins – who is survived by his wife, Alison, and three children – “a truly a great person and an amazing musician”. “My heart, my love and my condolences go out to his wife, his children, his family, his band and his fans. See you on the other side,” Osbourne said.

In a statement, the Foo Fighters said they were devastated “by the tragic and untimely loss of our beloved Taylor Hawkins. His musical spirit and infectious laughter will live with us forever. Our hearts go out to his wife, children, and family, and we ask that their privacy be treated with the utmost respect in this unimaginably difficult time.”

The band’s singer, Dave Grohl, the former Nirvana drummer, has spoken frequently of his close relationship with a musician he once called “the love of my life”.

“Upon first meeting, our bond was immediate, and we grew closer with every day, every song, every note that we played together,” Grohl, who lost his friend and Nirvana bandmate Kurt Cobain in 1994, wrote in his 2021 memoirs. “I am not afraid to say that our chance meeting was a kind of love at first sight … Together, we have become an unstoppable duo, onstage and off, in pursuit of any and all adventure we can find.”

Top South American artists also mourned the premature death of Hawkins, who was born in Texas in 1972 and raised in California. In Brazil, where the Foo Fighters had been scheduled to headline the last night of the Lollapalooza festival on Sunday, the rapper Emicida used his performance at the same event to lament the passing of “our brother”.

“Our hearts are broken because all of us looked up to the Foo Fighters in some way,” Emicida told fans, announcing a special tribute to “one of the greatest drummers of all time” on Sunday night featuring artists including fellow rapper Criolo and the band Planet Hemp.

The singer-songwriter Miley Cyrus broke down on stage as she remembered her friend. “We lost a legend in rock music … and I just want to send my most peaceful wishes to the Foo Fighters family and the Hawkins family,” she told Lollapalooza.

There were also onstage tributes in the UK, where the former Oasis singer Liam Gallagher dedicated one of the group’s biggest hits to Hawkins. “You and I are gonna live forever, Gonna live forever,” Gallagher sang on Saturday night as the drummer’s image was projected on to a screen behind him.

“I dedicate this last song to the one and only Taylor fucking Hawkins who has sadly passed away,” Gallagher told the audience at the Royal Albert Hall in London.