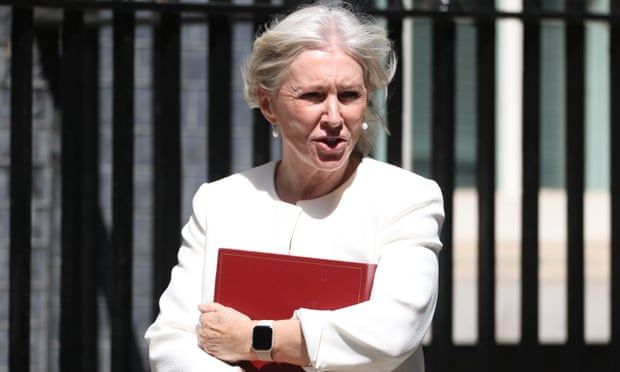 Tech platforms will be barred from taking down news content in the UK until an appeal has been heard against the decision, ministers have said.

A change to the online safety bill means that articles in breach of a service’s terms and conditions cannot be removed or hidden until the publisher has been notified and has received the verdict of any appeal to the platform.

The amendment to the legislation is intended to avoid a repeat of an incident last year when YouTube suddenly banned the digital station TalkRadio from its platform for violating its content guidelines. It was reinstated 12 hours later.

The culture secretary, Nadine Dorries, said democracy “depends on people’s access to high-quality journalism”. She added: “We’ve seen tech firms arbitrarily remove legitimate journalism with a complete lack of transparency and this could seriously impact public discourse. These extra protections will stop that from happening.”

The amendment applies to the biggest tech platforms, such as Twitter, YouTube and Facebook, and is designed to address concerns that the bill’s provisions on protecting users from harmful content could encourage tech firms to be overzealous in removing or downgrading content.

The new provision does not apply to illegal content, known as priority offences in the bill, which covers content such as terrorist and child sexual abuse material, which can be taken down without appeal. It also will not apply to news outlets subject to sanctions, such as the Kremlin-backed RT and Sputnik.

Other amendments include requiring Ofcom, the communications watchdog, to review the impact of the bill on news publisher content within two years of the bill coming into law. There will also be further protections for reader comments on articles. The bill is due to return to parliament next week before being implemented early next year.

The News Media Association, which represents 900 titles in the national, regional and local news industry, said the changes were “essential” to protecting press freedom.

“These amendments are essential to protect media freedom and to safeguard consumer access to accurate, timely and trusted news and information online,” said Sayra Tekin, director of legal at the NMA. “By ensuring that recognised news publisher content cannot be arbitrarily removed by platforms, the online safety bill will help tackle the flood of mis- and disinformation online.”

The government also announced some of the harmful content that it expects tech platforms to address. The categories include online abuse and harassment, promoting eating disorders, and encouraging self-harm. Major platforms will have to explain how they will deal with that content – including whether it will result in takedowns – in their terms and conditions, which will be monitored by Ofcom.