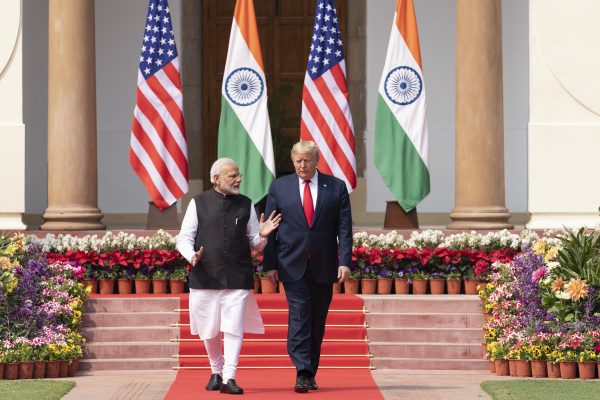 The Future of US-India Digital Relations

Beneath the surface, the Trump and Modi administrations had more tensions than common ground on digital issues.
Outgoing U.S. President Donald Trump has prided himself on his deft handling of personal relationships, continuously touting during his administration the power of his negotiating tactics in a room, his win-at-any-cost mentality, and his “very large brain.”

“I’ve made a lot of deals,” he said in May 2018, when addressing the media alongside South Korean President Moon Jae-in. “I know deals, I think, better than anybody knows deals.”

The bonhomie that marked his meetings with Indian Prime Minister Narendra Modi might superficially appear to support Trump’s self-view – the president’s February 2020 visit to New Delhi included, after all, a MAGA-style rally and the two leaders repeatedly hugging and shaking hands.

If all one cared about in diplomacy was how politely two leaders addressed each other at press briefing podiums, then perhaps U.S.-India relations satisfied this definition of success.

Yet the reality is that U.S.-India relations during the Trump administration in the digital sphere, once an observer looked below the surface, plainly did not reflect the Trump façade of masterful statecraft (as with many of Washington’s global relationships in the last four years).

The Trump administration had limited success in its campaign to ban Chinese telecom Huawei from India’s 5G infrastructure. It pushed back on proposed data localization rules but perhaps only partly succeeded because of simultaneous lobbying from American firms. And it certainly failed more broadly in building a strong bilateral partnership to address China’s technological rise.

Even outside the digital sphere, the White House took some notably bad stances in the U.S.-India relationship, especially when Trump praised Modi’s religious tolerance even as months of anti-Muslim rhetoric and policies from Modi and other Indian politicians fed violence in the streets of New Delhi.

Mosques were set ablaze, and more than 50 people, most of them Muslims, were attacked and killed in what Indian journalist Rana Ayyub called “the cost of Narendra Modi giving his blessing to bloodshed.” In line with Trump’s playing-the-strongman-attitude, his comments were not just ignorance manifested but deliberate lying about, and excusing, clear ethnonationalist, Islamophobic violence.

The incoming Biden-Harris administration therefore has many challenges and opportunities at hand in the U.S.-India relationship, particularly in the digital sphere. Data localization, internet governance, 5G telecommunications, artificial intelligence norms-development, and supply chain security are key areas where the United States needs to bring a far more comprehensive agenda to the table than that put forward by the Trump administration. The Biden-Harris administration will, of course, have to return meaning to the word “strategy” itself, too.

Looking back over the last four years of U.S.-India tech relations underscores that the Biden-Harris administration has the opportunity to break new ground on issues like 5G telecommunications and digital trade. But what the new White House occupant should do, however, is place these opportunities for cooperation in the context of addressing digital repression, understanding simultaneously that not every issue can be tackled in the same way.
#Donald Trump
Add Comment