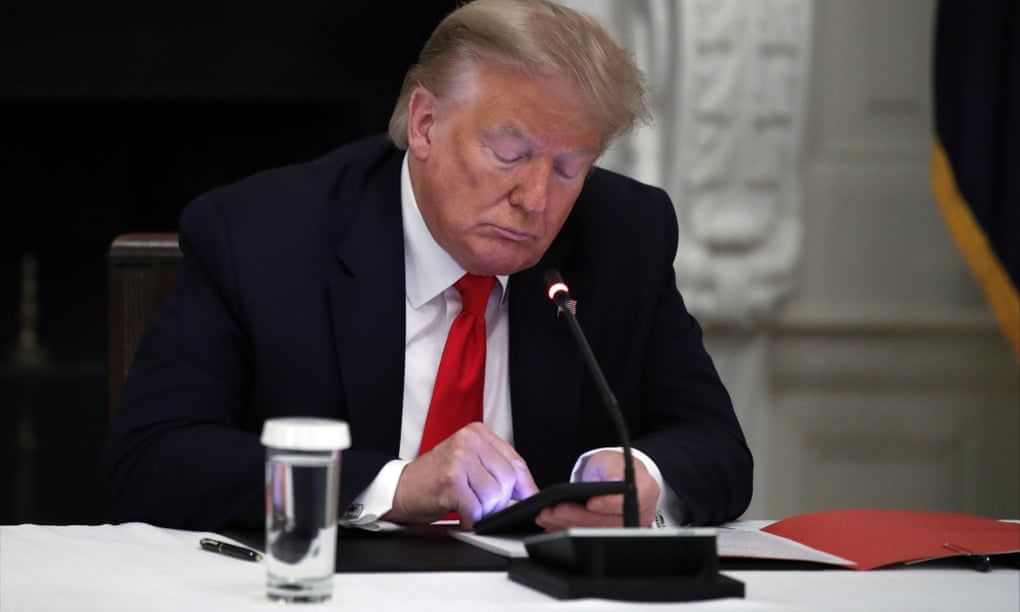 The silence of Donald Trump: how Twitter’s ban is cramping his style

It was just like old times. On Wednesday alone, Donald Trump issued pronouncements on a potential war with China, what Congress should do about the debt ceiling, false claims of a stolen election and his Fox News ally “the great Sean Hannity”.

But how many people noticed?

Cast into the social media wilderness, the former US president releases statements by email these days, clogging the inboxes of reporters whose attention has turned elsewhere. The era when a single tweet from Trump could electrify cable news, rattle financial markets and unnerve foreign capitals is long gone.

His post-presidential online engagement is in freefall, the Axios website reported this week, citing data from SocialFlow, an optimization platform that measures clicks from posts referred from its network of publishers.

Clicks to content about Trump dropped 37% in August and September compared with June and July, according to the findings. This represented a 50% decline since March. The decline has been inexorable since the blockbuster event of Trump’s impeachment trial in February.

In short “the former guy”, as Joe Biden calls him, who once brutally colonized social media feeds, is fading fast, a victim of the rapid news cycle he once reigned over.

Monika McDermott, a political science professor at Fordham University in New York, said: “His online presence has definitely declined due to a variety of factors. First of all, he was better on Twitter because he was punchy. He was of the moment: people followed him and got constant updates. Any other platform is very difficult for him to navigate with his style and personality.”

“In addition to that, he’s lost his position as president of the United States, and he doesn’t have a concrete election yet that he’s actually running for. The attention has been siphoned away by the current administration and what’s going on in the country and the Delta variant and all kinds of other things. He’s become to some extent irrelevant to the general populace, even though he’s still very relevant to his still very loyal followers.”

Trump had more than 88 million followers on Twitter and used it as his social media megaphone, stoking division, insulting opponents and perpetrating crimes against spelling. 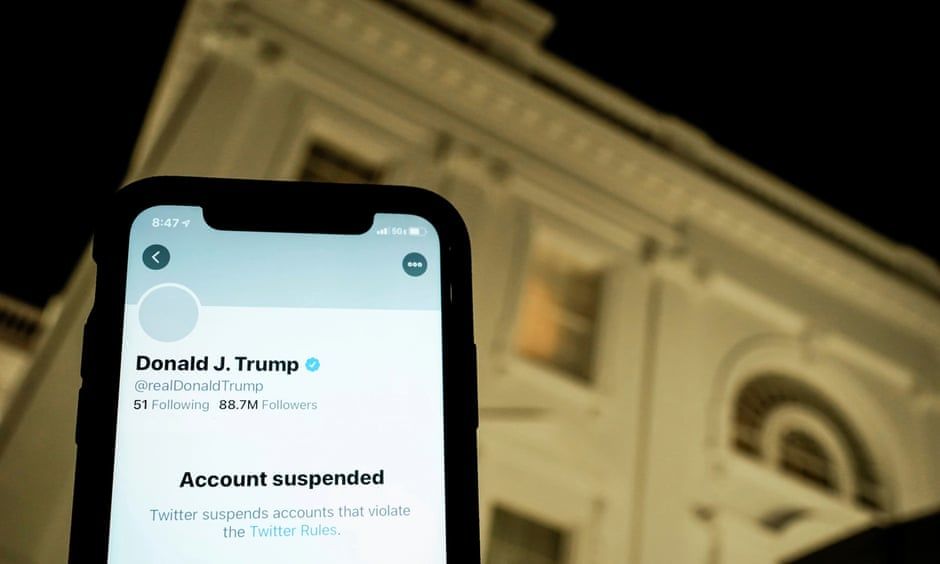 But Twitter joined several other social media platforms in banning him after a mob of his supporters attacked the US Capitol on 6 January. Twitter said his tweets had violated its policy barring “glorification of violence” and were “highly likely” to encourage people to replicate what happened in the deadly insurrection.

From that moment Trump’s ability to dominate the online agenda went into a precipitous decline. He subsequently launched his own “platform”, a glorified blog that bit the dust after a month. He continues to email statements via his Save America political action committee but they are often lengthy and seldom trouble cable news chyron writers.

Michael D’Antonio, a political commentator and author of The Truth About Trump, observed: “It’s almost like the difference between a text message and a telephone call. People generally don’t want to talk on the phone any more but they will respond to a text if you’re economical in what you write and direct.”

Such failed ventures only serve to demonstrate how Trump and Twitter were perfect for each other, a loss that he increasingly appears to understand. Earlier this month he filed a court motion asking a federal judge in Florida to force Twitter to reinstate his account – potentially putting him back at the centre of attention.

D’Antonio added: “For five or six years there were hundreds, if not thousands, of people in journalism tuned to his Twitter output and poised to respond with articles or calls to other sources because he was so good at using the form. He just seemed to excel at writing what were essentially tabloid headlines every day that I connect to his lifelong obsession with the tabloids that arose because of [Rupert] Murdoch and the [New York] Post.

“He met his perfect medium in social media, especially Twitter. It connected him with an audience that wasn’t interested in reading more than a couple of sentences about something and actually they were primed for disinformation delivered via social media because people were just eager for the snappy retort.”

The shift means that a striking disconnect has emerged over the past nine months. Trump, ensconced at his estates in Florida or New Jersey, has been largely irrelevant to substantive policy debates about the Afghanistan withdrawal and Biden’s infrastructure bill and social spending plans. Mitch McConnell, the Republican minority leader in the Senate, appears to be paying him little heed.

In addition, the former president struggles to break through and make news, and when he does it is usually because of a damaging revelation from a book or official investigation about his attempt to overturn the 2020 election. Axios cited data from NewsWhip showing there were 26% fewer stories about him during August and September than in March and April. And the stories were averaging 28% less engagement on social media. 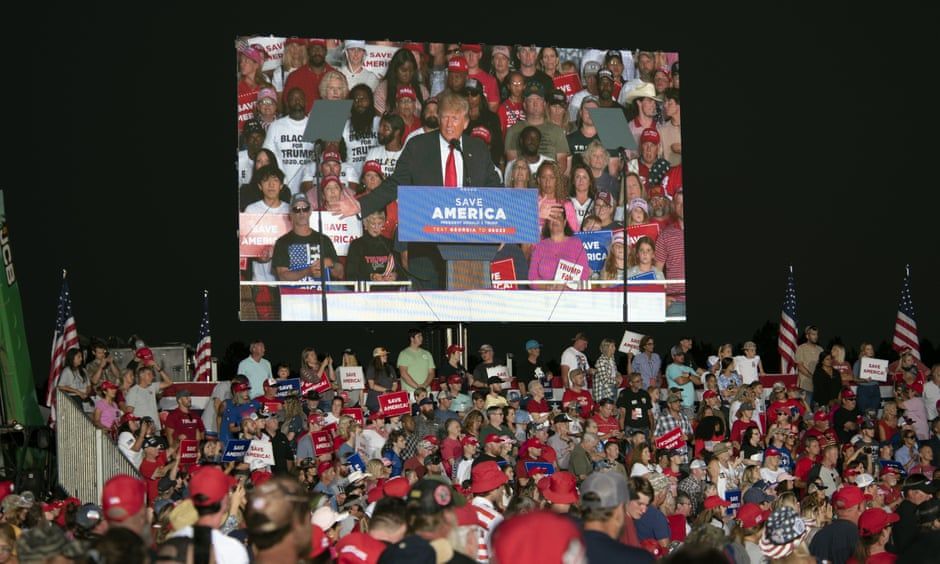 Donald Trump can still reach his base through rallies such as this one in Perry, Georgia, last month, where he addressed a crowd of thousands.

Yet Trump is still widely acknowledged as the unofficial leader of the Republican party and his “big lie” about a stolen election has all but become party orthodoxy. He continues to be given a platform by conservative broadcasters such as Fox News, Newsmax and the One America News Network. Should he decide to run for president again in 2024, he would instantly be the Republican frontrunner.

John Zogby, a pollster and author, said: “I’m in upstate New York. I’m seeing hundreds of signs for local and judicial races but also ‘Honk if you’re with Trump’. The famous ‘Fuck Biden’ shrines are mainly rural but they’re real.

“Trump is running for president. He’s got his network and that includes talk radio and cable. He’ll breathe more life into Newsmax and the One America News Network. He’ll find his way because his base wants him.”

From the start, Trump’s digital power was been augmented by an analogue soapbox: campaign rallies that offer diehard fans the chance to be in his presence in a communion of grievance. On Saturday night he is likely to draw a huge crowd for a rally in Iowa, the first state to have a say in party primary contests.

Tara Setmayer, a former Republican communications director on Capitol Hill, said: “We’re no longer married to our Twitter feeds and cellphones and we can actually enjoy Sunday brunch now because Donald Trump isn’t tweeting something insane. However, the undercurrent of his presence is still a threat to our politics.

“Despite the fact that he isn’t so ubiquitous on social media platforms, he’s still out there and he still has a rightwing media ecosystem that continues to promote his ilk and that’s problematic.”

Trump would be eligible to return to Facebook in 2023, when his two-year suspension has run its course, just in time for a White House bid. At that point Twitter could also face overwhelming pressure to reinstate him or face the accusation that it is tipping the scales against one candidate in a presidential election.

Setmayer, a senior adviser to the Lincoln Project, which worked for Trump’s defeat last year, noted that Twitter could have a further incentive to bring him back. “I don’t know how much they will be able to justify keeping Trump off if he decides to run again from a business perspective, given how many users left as a result of them banning Trump. Engagement was down, their stock went down.

“Twitter is still trying to figure out how to make their platform profitable so if you take off one of your most prolific, engaging accounts, it hurts their bottom line. It may be a different reality that faces Twitter at the time when they need to make their decision, unfortunately.”