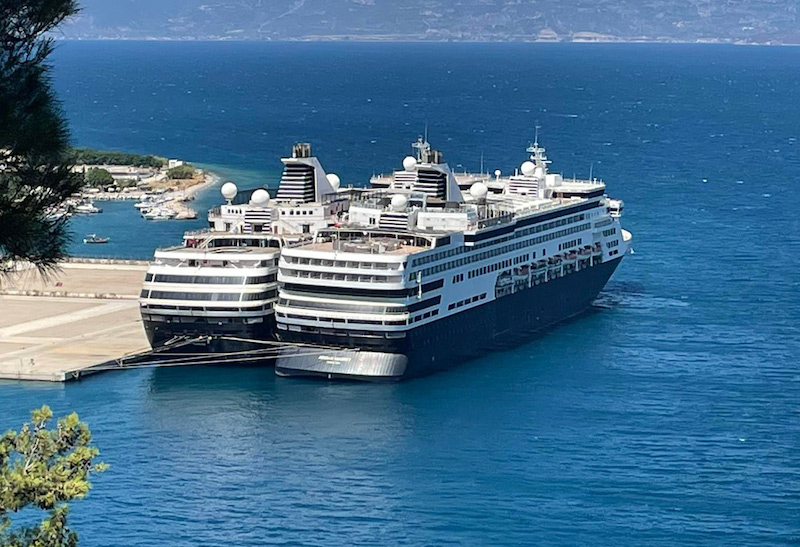 These Cruise Ships Continue to Sit in Limbo

While most of the world’s cruise ships are now back in service, an entire fleet of vessels continues to sit idle in several spots around the globe. These cruise vessels are entering 2022 without known plans for the future.

Cruise Industry News has gathered the latest on 15 ships in the “idle fleet.”

The Berlin was sold to new owners in 2020 after the closure of Germany’s FTI Cruises. The new operators acquired the 420-guest vessel for just over one million euros and planned to convert it into a private yacht.

Now known as the Dream Goddess, the 1980-built ship has remained docked in a Greek shipyard for most of the year, with no further plans or updates announced at press time.

In April 2020, TUI Group decided to retire the 1984-built Marella Celebration earlier than planned, citing the COVID-19 pandemic. The 1,250-guest ship was then withdrawn from the Marella Cruises fleet, eventually arriving in Greece’s Elefsis Bay, where it remains anchored to this day.

While there have been rumors of scrapping throughout the year, the former MS Noordam hasn’t moved for 17 months.

The 1,506-guest Marella Dream is another vessel retired by Marella Cruises earlier than planned and is also accompanied by scrapping rumors and an uncertain future.

The vessel – which was built for Home Lines in 1986 – left the Marella fleet in October 2020. Like the Celebration, it sailed to Greece, where it remains anchored in the Elefsis Bay to this day.

The former Saga Pearl II exited the Saga Cruises fleet in 2019, after being replaced with the company’s first newbuild.

The 1981-built ship was subsequently sold to new owners and has remained out of service since. The 446-guest Pearl II is currently docked in Greece with no known plans for its future.

The 1948-built Astoria found itself among some of the oldest cruise ships still in service when the pandemic broke. The 520-guest vessel was formerly an ocean liner. It was converted to cruising in the early 1990s, most recently sailing on charter to the now-defunct Cruise & Maritime Voyages.

In early 2020, the former Stockholm was returned to its owners, who declared bankruptcy shortly after. In 2021, the vessel was reportedly sold to new operators but has remained docked in the Netherlands with no official plans announced.

The 100-guest Silver Galapagos sailed for Silversea Cruises from 2013 until it was replaced by the new Silver Origin in 2021.

With no plans announced for its future, the 1990-built expedition vessel was at first laid up in Ecuador. It was renamed the Mantra in May and sailed to Panama, where it continues to sit idle.

A year after leaving the Carnival Cruise Line fleet, the former Carnival Fascination continues to face an uncertain future. The Fantasy-class ship escaped the breakers in October 2020 after being sold to Asian operators who planned to transform it into a floating hotel.

Renamed the Century Harmony, the 1994-built ship was later intended to be operated by Century Cruises, a China-based brand that owns a fleet of Yangtze River cruise vessels. The plans now seem to be cancelled, as the vessel sailed to Sri Lanka amid scrapping rumors.

The 1990-built Horizon – previously operated by Pullmantur Cruceros – was returned to Royal Caribbean International when the Spanish cruise line entered administration in July 2020.

The ship has remained laid up in Greece since despite initially being expected to be scrapped like the rest of the Pullmantur fleet. Before joining Pullmantur in 2009, the 1,450-guests ship also sailed for Celebrity Cruises and Island Cruises.

Queen of the Oceans

The former Oceana was sold by P&O Cruises to a Greek ferry operator, Seajets, in 2020, becoming its first cruise ship.

The vessel was renamed the Queen of the Oceans and has remained laid up in Greece since facing an unknown future. The 1999-built vessel was originally intended for Princess Cruises. It has capacity for 2,000 guests and 77,000 tons.

Two additional ships were bought by Seajets soon after – the 1993-built Maasdam and the 1996-built Veendam. The vessels were acquired by the Greek operator from Holland America Line in August 2020.

Like the former Oceana, the two ships have been renamed but have no plans for their future in sight while they stay docked in Greece. The Maasdam became the Aegean Myth, while the Veendam is now the Aegean Majesty.

A similar situation saw the former Pacific Aria being bought by Seajeats in October 2020. The 1994-built ship was renamed the Aegean Goddess, but no plans have been announced for it by the Greek ferry operator.

Before the pandemic, the ship – previously operated by P&O Australia – was sold and expected to be transferred to Cruise & Maritime Voyages in 2021. However, the deal was cancelled with the demise of the company.

Seajets’ latest acquisition, the 2,354-guest Majesty of the Seas, was previously operated by Royal Caribbean International.

The 1993-built vessel was bought by the Greek operator in early 2021 and has remained laid up in Greece since, with no announced plans for its future.

The 1972-built Black Watch – previously operated by Fred. Olsen Cruise Lines – was sold to undisclosed buyers in September 2020 along with its sister ship Boudicca. At the time of the sale, both vessels were expected to be converted into floating accommodations.

While the Boudicca was since beached for scrapping in Turkey, the status of its 807-guest sister ship is still unknown.

The former Fuji Maru was built for Mitsui O.S.K. Passenger Line in Japan, but for the last few years there are no known plans for its future. After being sold by its original owners in December 2013, the 23,340-ton vessel has been laid up in Asia for most of the past decade.

In late 2019, the 1989-built vessel sailed to China under the Sierra Leone flag, which led to scrapping rumors. In 2021, however, the ship resurfaced and sailed to Indonesia, where it is now anchored. Its current status is unknown.