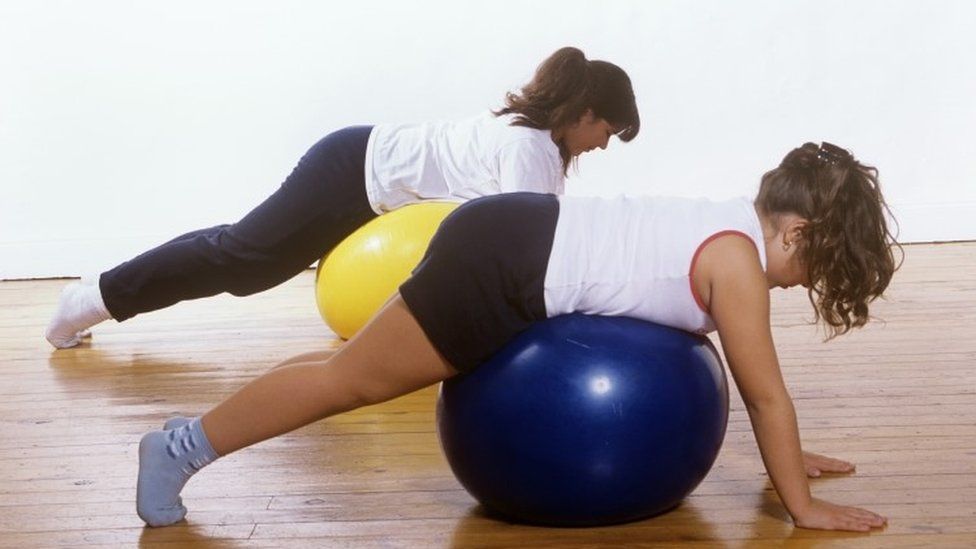 Things to do in half term for families in lockdown

A year ago families across the UK were packing suitcases, organising play dates and planning day trips - all in preparation for the February half-term break.

But this year's school holidays are set to look very different, with travel and social mixing restricted to stem the spread of Covid-19.

So, as children take a week off from Zoom lessons or socially distanced classrooms, what can parents do to keep the family entertained without burning themselves out?

"Children are going to have to be quite resourceful to keep active during this half-term," says former England footballer Rachel Yankey.

She has been coaching children remotely as part of the Youth Sport Trust's After School Sport Club, which takes place most weekday evenings.

"If kids don't have an outdoor space, parents might need to make an exception and allow them to dribble a football inside in a controlled way.

"Even half an hour of physical activity makes a big difference to a child's day."

Jason Sugrue, a former British table-tennis champion who works with London-based charity Greenhouse Sports, says children should be "left to their own devices" as much as possible.

"Kids are bored of adults telling them what to do by now - so we've been doing a lot of peer-to-peer fitness classes online.

"Kids will work with their friends to find an object in their house [in a treasure hunt, for example] - it's simple, free and fun."

Under lockdown rules, families can still get out of the house for exercise once a day, provided they remain within their local area.

"It's really important young people make the most of that time outside," says Sugrue. "Nothing beats fresh air."

"Whether it's a cycle ride, drills or just walking, families must try and find a designated time each day to do an activity together during half-term."

Escape in a book

"It's always said about books that they take you to another place," says children's author Michael Rosen. "It may be to the inside of a mind that's not theirs or a physical place, but that feels especially important for kids during lockdown."

"My trick was always to try and connect books up to theatre, live readings and movies," he explains.

"Obviously, we can't do that now but parents must be open to using digital tools to trigger more interest."

The National Literacy Trust and Oak National Academy are offering online activities and making hundreds of e-books available to children through the virtual school library project.

But Rosen recommends parents let children's reading habits over the holidays "emerge organically instead of foisting their anxiety about the need to read on [them]".

"If ever there's a time to relax the rules on screen time, it's this February half-term," says child psychologist Laverne Antrobus. "Especially as it will be the main way for them to stay connected with their friends."

Oxford University research on more than 17,000 teenagers in the US, UK and Ireland showed higher levels of screen time had little discernible effect on their mental health, but many parents are still cautious.

"Screen time doesn't have to be isolating," adds Antrobus. "Choosing a film or a TV show for the family to watch in the evening is something that brings everyone together."

Virtual events are also accessible to families over half-term: the Royal Observatory Greenwich is putting on stargazing workshops and the Shakespeare's Globe festival is offering family tickets for storytelling masterclasses.

Antrobus warns it may be "easier" for parents to get younger children engaged than teenagers.

"With teenagers, it's a case of checking in on them and showing interest in the video game they're playing - they love to teach us dinosaurs about tech," she explains.

"Arts and crafts is all about making the most of everyday objects - in the house or in nature," says illustrator Rob Biddulph, whose online drawing tutorials have become increasingly popular during the pandemic.

"We've been going out on walks as a family and we'll pick up beautiful leaves, pebbles and sticks.

"And when we get home we'll paint eyes on them and turn them into characters - all that takes is two splodges of white paint."

The Tate Museum and the Southbank Centre also have virtual art events available to children over half-term.

Biddulph says his 11-year-old daughter is less "receptive" to drawing and painting than she used to be "but can still be tempted away from the screen when she sees the rest of the family having fun together".