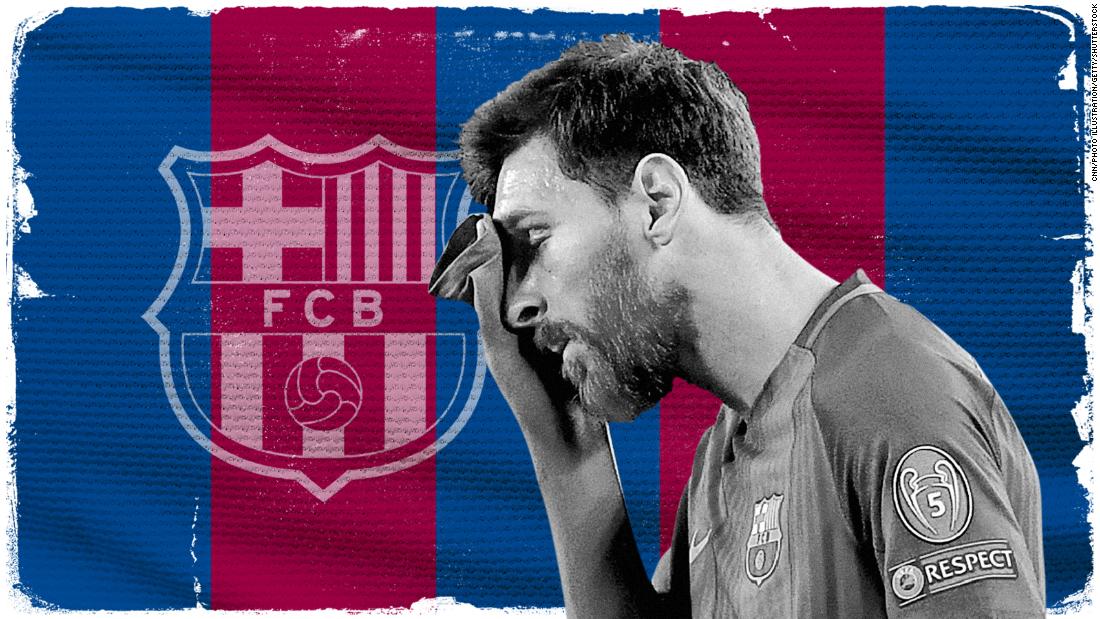 'This is war!' How the relationship between Lionel Messi and Barcelona turned sour

Overnight, angry Barcelona fans descended on the Camp Nou to lay the blame at the feet of the man they hold responsible for Lionel Messi's desire to leave.

"Bartomeu, resign!" they chanted over and over again.

"We have said on many occasions that we think of Lionel Messi as an FC Barcelona player," he said at the press conference for new signing Trincão.

"Barcelona has rebuilt itself on many occasions throughout its history and has always come back stronger. Our thinking is to have [Trincão] alongside the best player in the world."

"There is no division in the club about Leo, anyone who understands football wants him here to return to win again -- he's a winner."

Many fans have been angry with club president Josep Maria Bartomeu for some time, unhappy with a seemingly scattergun approach to planning and recruitment that has seen the team regress following the retirement of the club's previous generation of stars, notably the 2011 all-conquering homegrown vintage of Xavi and Iniesta. 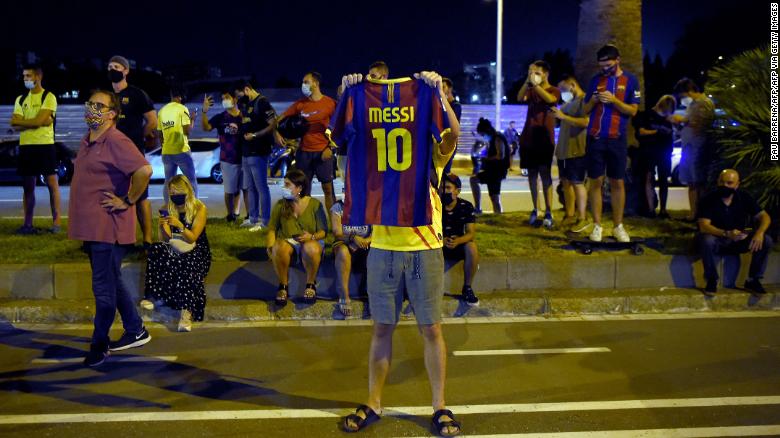 Barcelona supporters gather outside the Camp Nou to show their displeasure with Bartomeu.

Messi's consistently brilliant match-winning moments of magic have papered over the cracks that have been steadily widening at the Camp Nou and some fans are rightly concerned about what will happen to their club should the Argentine talisman get his wish and leave.

The humiliating 8-2 defeat to Bayern Munich in the Champions League quarterfinals -- the biggest European defeat in Barcelona's history -- was unsurprisingly the straw that broke the camel's back, but Messi's discontent at the club he made his debut for 16 years ago has been evident for some time.

Messi's has long endured a strained relationship with Bartomeu and the Barcelona hierarchy, but this came to a head in February when sporting director and former teammate Eric Abidal accused the players of downing tools to get former manager Ernesto Valverde sacked.

In response, the Argentine responded by posting a series of furious messages on his Instagram account, forcing Bartomeu to call an emergency meeting between the pair.

After the Bayern defeat, Abidal left the club, while head coach Quique Setien was sacked and replaced by Ronald Koeman.

Earlier this year when Barcelona's players announced they would be taking a 70% pay cut to help the club through the coronavirus pandemic, Messi took another not-so-subtle swipe at the board for the way they had publicly handled negotiations.

Eventually, the off-field battles with his own club, coupled with the team's failings on the pitch -- this is Barcelona's first trophy-less season since 2007-08 -- seem to have become too much.

It has now been five years since Barcelona won the Champions League, an almost unthinkable barren stretch for a team boasting one of the greatest players the game has ever seen. 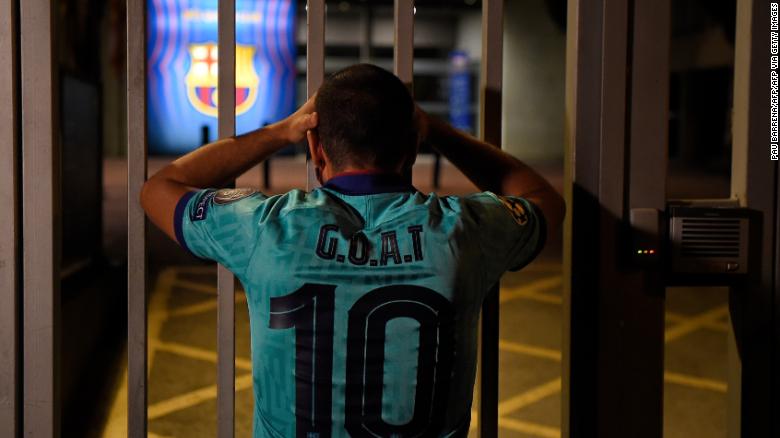 One Barcelona fan with the Greatest Of All Time on his shirt looks dejected outside the Camp Nou.

Messi has been at Barcelona since moving to the La Masia academy from Argentina at the age of 13, but it appears their relationship is destined for a messy ending.

According to multiple reports, the 33-year-old is utilizing a clause in his contract which allows him to leave the club for free this summer. Reportedly the clause expired on June 10, but Messi believes he still has the right to activate it now due to the season being extended because of the coronavirus pandemic.

Barcelona remains confident that will not be the case and any potential suitors will need to meet Messi's €700 million ($824.8 million) release clause to secure his services -- an amount no club in the world could afford due to Financial Fair Play regulations.

However, should Messi get his wish and leave, there are perhaps only two clubs in Europe that could realistically afford his reported $100 million per year salary: Manchester City and Paris-Saint Germain. 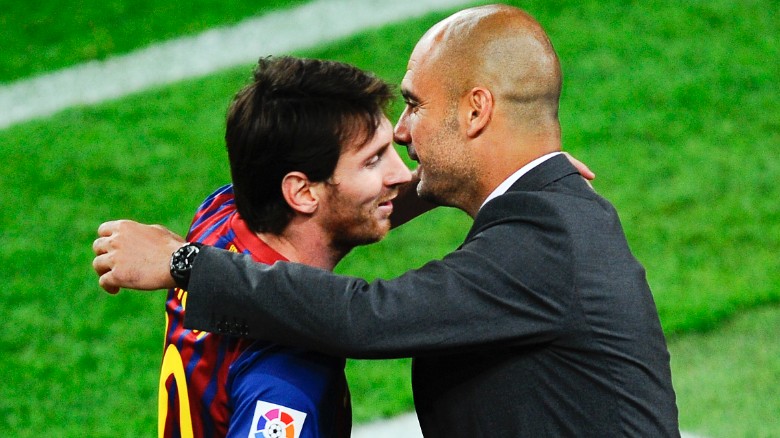 Could Lionel Messi join up with former coach Pep Guardiola at Manchester City?

"We are not thinking about any contract clause," Planes said. "The marriage between Messi and FC Barcelona has given much happiness to both parties ... we are working internally to convince Messi to find the best solution for FC Barcelona and for Messi.

"Messi has not told us that he will not be showing up at training, but any communication will remain between the parties and we will not broadcast what is spoken out of respect."

Unsurprisingly, Spanish media has been having a field day since arguably the biggest transfer news in La Liga's history broke on Tuesday.

"Messi -- Barcelona: ¡This is war!" was one headline in sports newspaper Marca.

"Leo Messi wants to leave Barcelona after 16 seasons in the first team with which he has won everything," the article read. "It's difficult to write this sentence
without exclamations."

"On October 16, 2004, a young 17-year-old Argentine striker made his debut for Barcelona, who 16 years later has become the greatest idol in the history of the club." 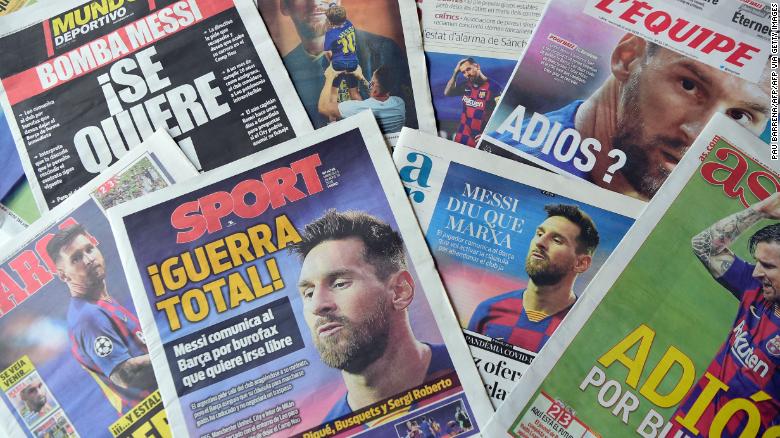 There's only one story dominating the front and back pages of newspaper this morning.

The club's treatment of teammate and best friend Luis Suarez -- Bartomeu and Koeman told the Uruguayan in no uncertain terms that his services are no longer required -- is reportedly another area of discontent.

Newspaper 'Sport' lists this as one of "the five keys to Messi's break with Barca."

"Suarez is his main support in the dressing room and one of his best friends and Leo believes that he deserved much more respect for his career."
Which means the dispute between Barcelona and Messi looks to be heading for a bittersweet ending to arguably the greatest partnership in history.