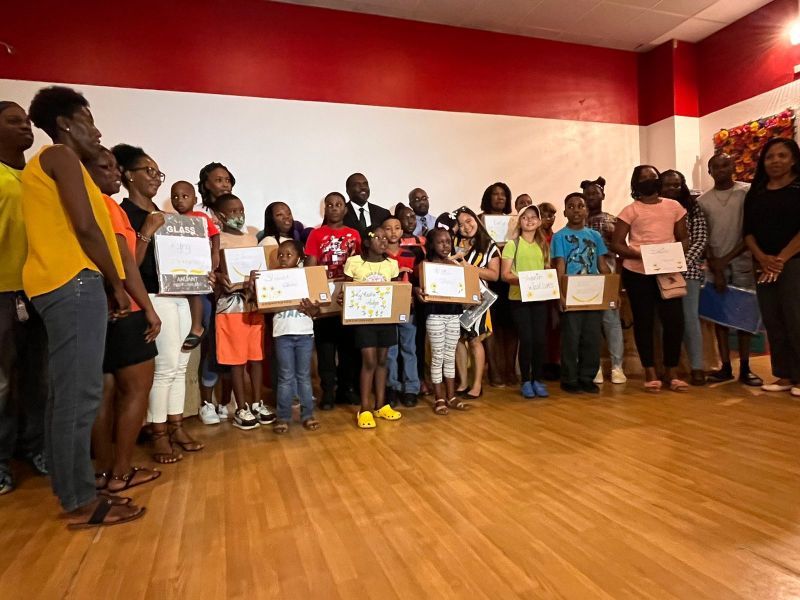 Six-year-old Ky’Resha Hodge was named the Virgin Islands’ top recycler amidst 42 students between the ages of two and 19 who competed for the Student Recycling competition conducted by Green VI in conjunction with the Department of Waste Management.
The students vied for new laptops and top honours to see who could gather the most plastic, glass and aluminum recyclables in the month of August.

Acting Manager for the Department of Waste Management explained that recycling is vital to our Territory right now. “We have to find ways to reduce the amount of waste we are producing as well as diverting recyclables out of the garbage stream.

The WE RECYCLE programme along with initiatives like this is a move towards that goal. I hope that the enthusiasm persists outside of the competition, and everyone continues to recycle wherever they are,” Mr. Allen said.

“The 2022 Student Recycling Competition showed us, once again, that when BVI families come together to make a difference in solving our waste problems, amazing things happen!”, said Green VI Deputy Director Sarah Penny, adding that, “As part of the competition a total of 402,000 plastic water bottles, 257,000 glass drink bottles and 22,750 aluminum beverage cans were collected. This means the Territory can now add 18,350 pounds of recyclables to the 7,021 tons already collected by the WE RECYCLE programme and diverted from burning or burying.”

Lake a 13-year-old student from the Bregado Flax Educational Centre said, “I’m happy to know that I’ve prevented large volumes of waste from being burned at the dump and polluting the environment by simply bringing these materials on my dad’s pickup truck to the Virgin Gorda Eco-Park. Filling all those large bags was not an easy task but it was worthwhile, not only for the prize, but to know my future may be a bit brighter.”

Other top recyclables winners included: Emily Davis, Shanae John, Nazir Cooper, Avonnia Bute, Kaiela Lewis, Jovianne Walters, Chemoi Flax and Alexis Gannigan. As part of the competition the participants could also submit videos that illustrated that reducing and reusing is just as important as recycling. The participants were urged to inspire someone to start composting, home gardening, conserving water, and recycling among other conservation methods.

“I want to congratulate the winners in each category and to all those who entered the competition. In my book you are all winners and many thanks to the friends and family who worked behind the scenes to make the competition great,” Mr. Allen concluded.

The Department of Waste Management is committed to ensuring that the natural beauty of the Territory is enhanced by utilising state of the art waste management technology to ensure timely collection disposal and where possible the recycling of waste.
#the Virgin Islands
Add Comment