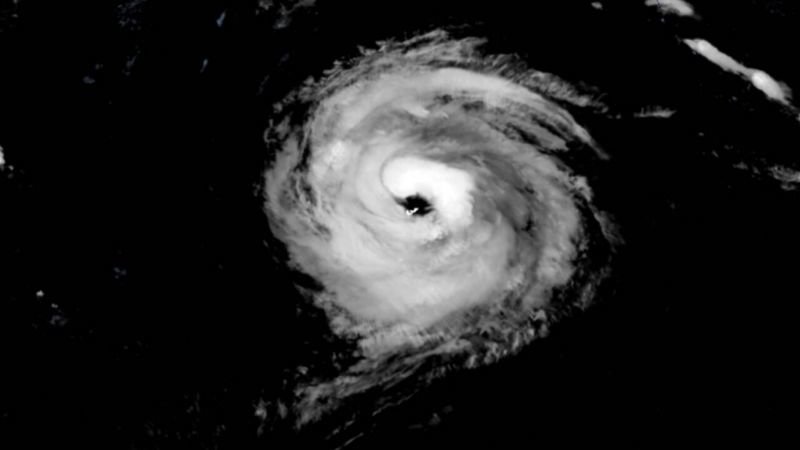 The entire island of Bermuda was directly in the eye of Hurricane Paulette on Monday morning, September 14, 2020, as the storm threatens to bring another round of damaging winds and torrential rains as it begins to move away.

Paulette was centered 55 miles (90 kilometers) north-northwest of Bermuda on Monday morning and was moving away to the north-northwest at 13 mph (20 kph). It had maximum sustained winds of 100 mph (160 kph), according to the National Hurricane Center (NHC).

Satellite imagery showed the island completely in the middle of the eye of the storm, surrounded on all sides by swirling clouds.

"Additional strengthening is likely when Paulette turns northeastward and moves away from Bermuda tonight through Tuesday," the NHC said.

A Hurricane Warning has been issued for Bermuda as Paulette is expected to strengthen into a dangerous hurricane when it approaches the British Overseas Territory late tonight, September 13, 2020, into early Monday, morning.

Fewer than 10 hurricanes have made direct landfall on the tiny island in the middle of the Atlantic since the National Hurricane Center began tracking such disasters in the 1850s.

There are only two more names left this season: Vicky and Wilfred. After that, it will move to the Greek alphabet for only the second time in history.

A Hurricane Warning has been issued for Bermuda as Paulette is expected to strengthen into a dangerous hurricane when it approaches the British Overseas Territory late tonight, September 13, 2020, into early Monday, morning.

Tropical-storm-force winds that make outside preparations difficult or dangerous are expected to reach Bermuda this afternoon or evening,” the National Hurricane Center said in its 5:00pm advisory.

“Preparations to protect life and property should be rushed to completion.”

It said at 5:00pm, the eye of Hurricane Paulette was located near latitude 30.6 North, longitude 63.1 West.

Paulette is moving toward the northwest near 14 mph (22 km/h) and this motion is expected to continue through tonight.

Centre of Paulette forecast to move over Bermuda

According to the NHC, a turn toward the north with a decrease in forward speed is forecast on Monday, followed by a faster northeastward motion Monday night and Tuesday. “On the forecast track, the center of Paulette will move near or over Bermuda Monday morning.”

Maximum sustained winds have increased to near 85 mph (140 km/h) with higher gusts, the NHC added.

The island of Bermuda can be seen directly in the eye of Hurricane Paulette on Monday, September 14, 2020.