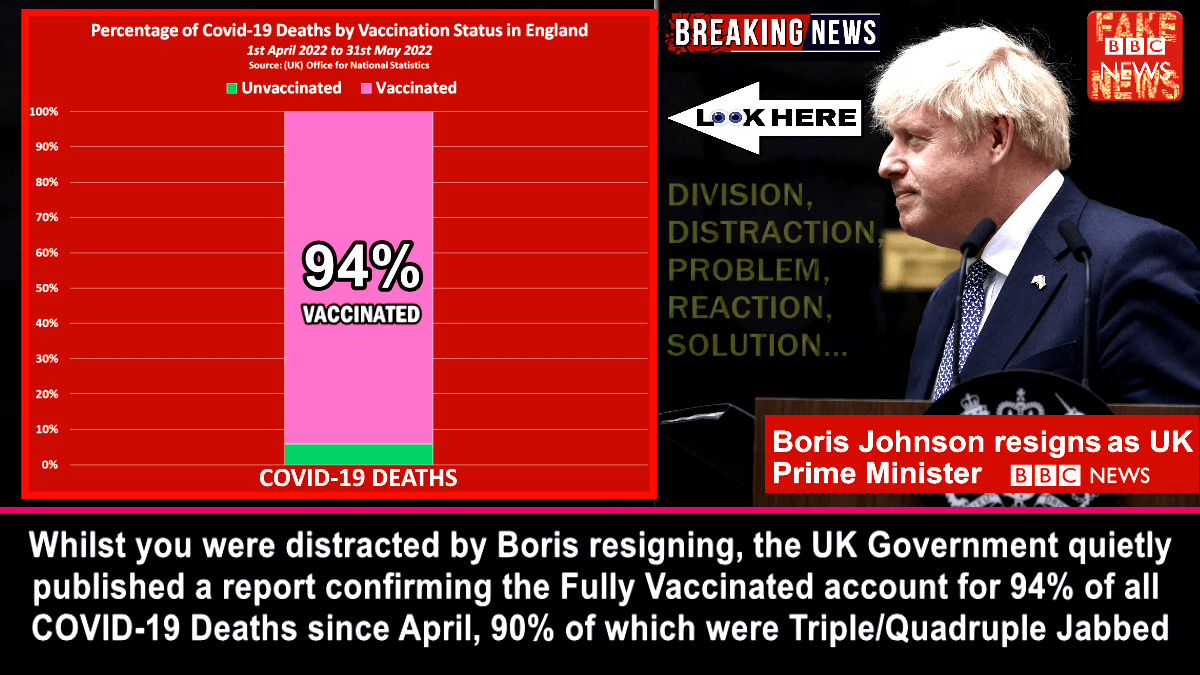 Whilst you were distracted by Boris resigning, the UK Gov. quietly published a report confirming the Vaccinated account for 94% of all COVID-19 Deaths since April, 90% of which were Triple/Quadruple Jabbed 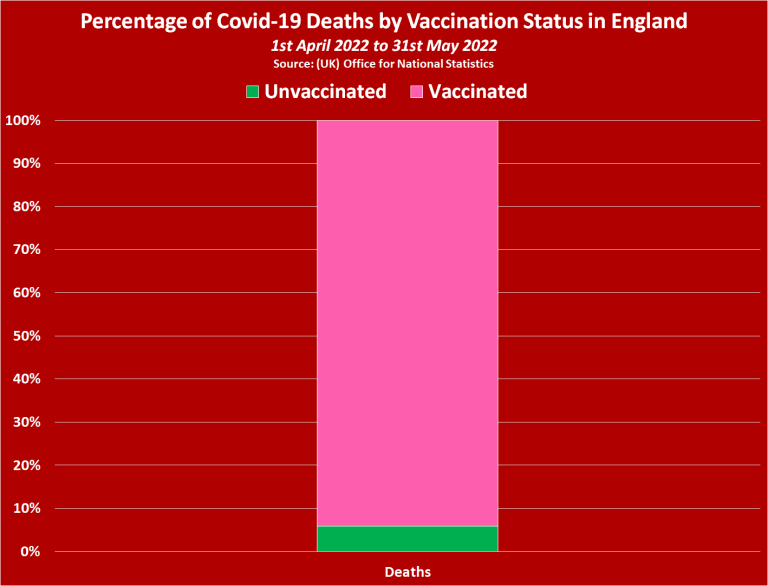 On the 7th July, Boris Johnson, the Prime Minister of the United Kingdom, announced he was resigning. Since then the Mainstream Media in the UK have distracted the public with 24/7 news on that announcement and speculation on who could replace him.

It’s times like these that you ought to watch what bad news is being quietly published in the background in the hope that it won’t receive much attention, and it just so happens that hours before Boris announced his resignation, his Government published new data that proves things have been terrible for the vaccinated population in England over the past couple of months.

Back in March 2022, the UK Health Security Agency announced that from April 1st 2022, they would no longer publish the vaccination status of Covid-19 cases, hospitalisations and deaths in England.

At the time, the UKHSA claimed this was because the UK Government had ended free universal Covid-19 testing and this therefore affected their “ability to robustly monitor Covid-19 cases by vaccination status”.

However, this was a lie.

The UK Health Security Agency had been looking for an excuse for months to stop publishing the data because it clearly showed the vaccinated population were suffering immense immune system damage, with case, hospitalisation, and death rates per 100,000 highest among the fully vaccinated population.

The following chart shows the real world Covid-19 vaccine effectiveness among the triple vaccinated population in England in the Week 3, Week 7 and Week 13 UKHSA Vaccine Surveillance reports of 2022 – 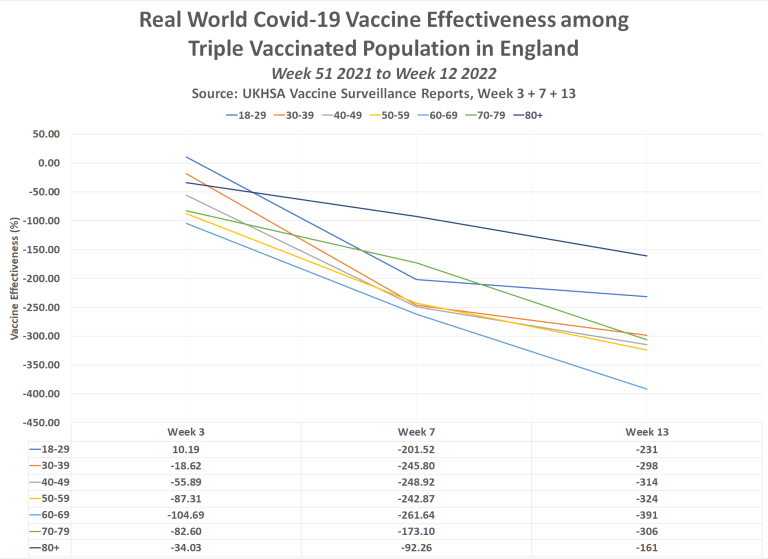 This was nowhere near the claimed 95% effectiveness by Pfizer was it?

But now we have more evidence to both prove the UKHSA was lying, and that the current mainstream media storm surrounding the resignation of Boris Johnson is just a distraction.

This is because another UK Government agency, known as the Office for National Statistics (ONS), has just published data on deaths by vaccination status.

The latest dataset from the ONS is titled ‘Deaths by Vaccination Status, England, 1 January 2021 to 31 May 2022‘, and it can be accessed on the ONS site here, and downloaded here.

Table 1 of the latest dataet contains figures on the mortality rates by vaccination status for all cause deaths, deaths involving Covid-19, and deaths not involving Covid-19. And it is here that we are able to ascertain the vaccination status of everyone who has died of Covid-19 since the beginning of April 2022, when the UKHSA claimed they could no longer reliably report the figures. 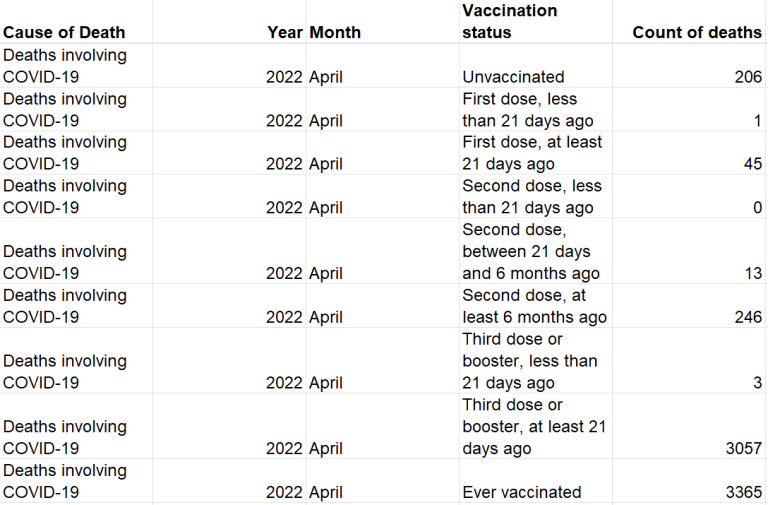 We’ve taken the figures provided by the ONS for both April and May 2022, and produced the following chart showing Covid-19 deaths by vaccination status in England between 1st April and 31st May 2022 – 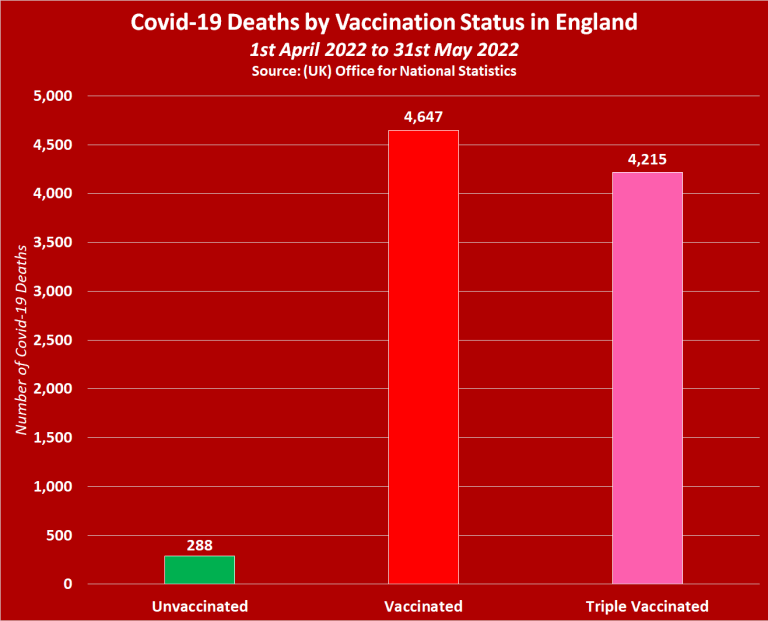 In March 2022, there were 321 Covid-19 deaths within 60 days of a positive test among the unvaccinated population according to the UKHSA Week 13 Vaccine Surveillance Report, as detailed in the following chart using data extracted from table 13b of the report –

This means there were 33 less deaths among the unvaccinated over two months (April and May) than there were in the whole of March. 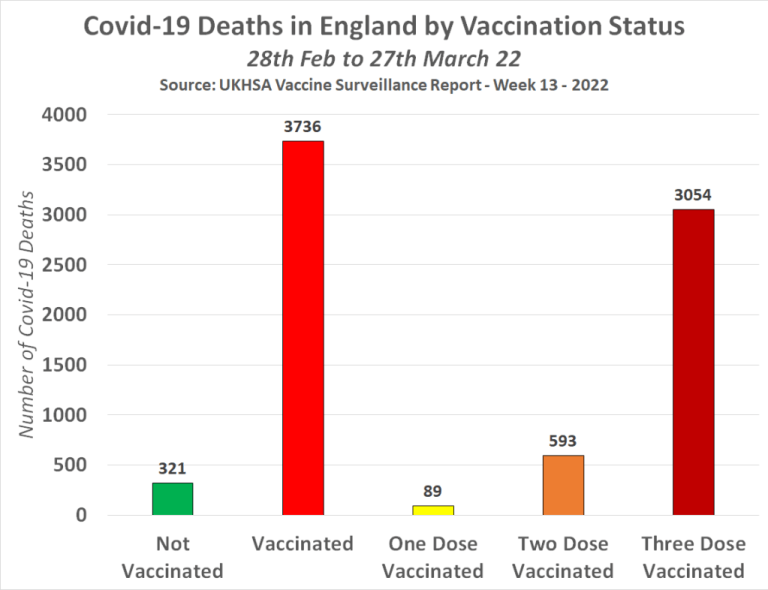 This means deaths have fallen drastically among the unvaccinated but increased significantly among the vaccinated population since the UKHSA claimed they could no longer reliably publish the data.

The following chart shows the percentage of Covid-19 deaths by vaccination status in England between 1st April and 31st May 2022, according to the latest ONS dataset published just hours before Boris Johnson’s resignation – 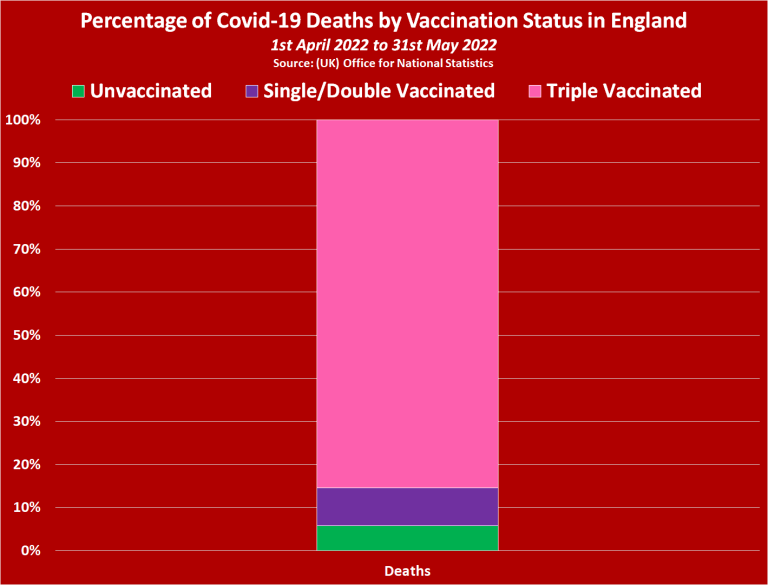 However, many in the UK have been given a fourth dose of a Covid-19 injection since the spring, and judging by the latest data from the Government of Cananda, it’s likely many of those deaths could actually be among the quadruple vaccinated. 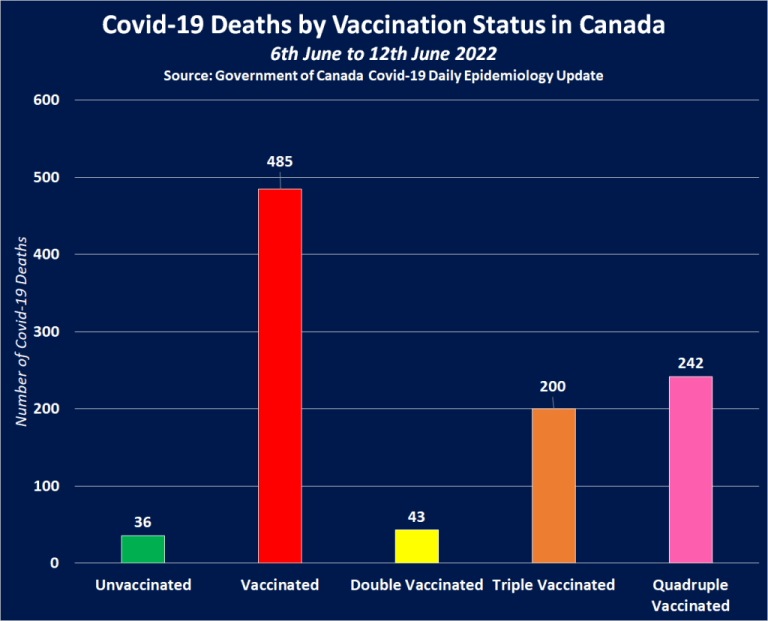 These aren’t the kind of figures you would expect to see if the Covid-19 injections really are up to 95% effective at preventing death, are they?

So there you have it, whilst you’ve been distracted by Boris Johnson’s resignation as Prime Minister of the United Kingdom, the UK Government quietly published a report just hours before his announcement containing data they previously claimed they didn’t have, which confirmed the vaccinated now account for 94% of Covid-19 deaths in England, and 90% of those deaths are among the triple vaccinated.

With news like this being swept under the rug by the mainstream media, it makes you wonder what else they will attempt to hide in the coming weeks?

Oh ya 35 days ago
Have to give credit to the left wing panatimes for posting the truth this time. UK HEALTHCARE has been one of the more honest heath agents to report what is really happening to those who took the clot shot.. Now those that took it need to do some research on what they can do to stop the never ending making of spike protein in their bodies because that is what is causing the clots thus heart attacks and strokes. FLCCC might be a good place to start. The life you save might be your own
View all comments (1)Add comment