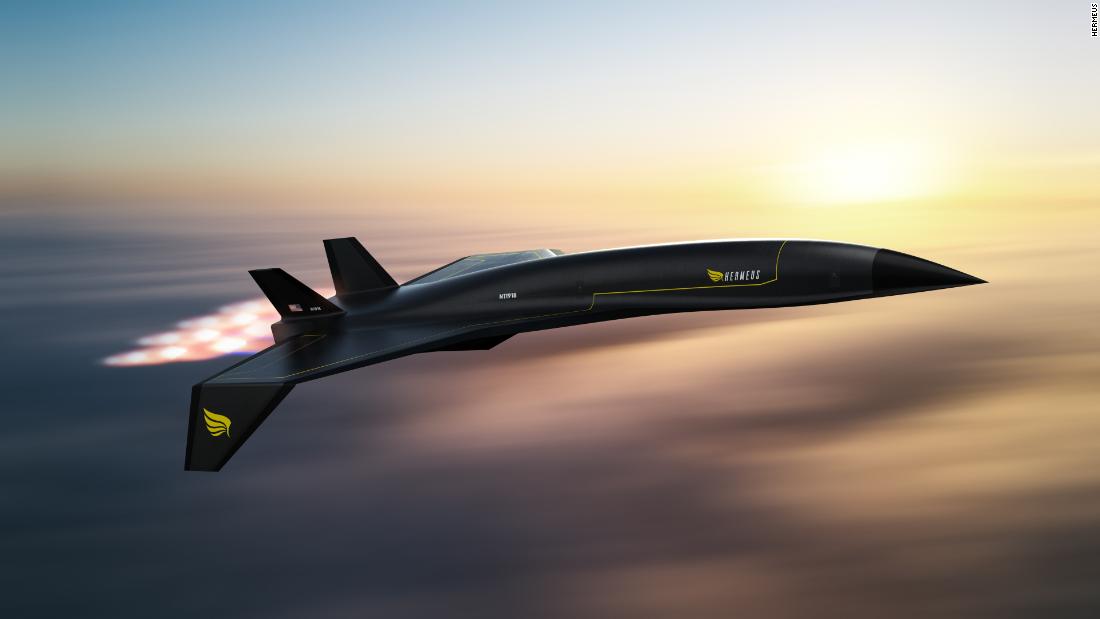 Atlanta-based startup Hermeus hopes to develop a passenger airplane capable of reaching Mach 5, or 3,000 miles per hour, but is the prospect of building a hypersonic successor to Concorde merely a flight of fancy?

Almost two decades since Concorde retired, interest around supersonic travel has been picking up pace, and several super-fast planes are under development. Airlines seem interested: United has already committed itself to offering supersonic routes as early as 2029.

But what about hypersonic travel, which happens at speeds of Mach 5 -- five times the speed of sound -- and above? That would get an aircraft from New York to London in just 90 minutes, compared to about three hours for Concorde, and between six to seven hours for a regular passenger jet.

Is it even possible?

Hermeus, an Atlanta-based startup whose goal is to develop hypersonic aircraft, believes so. It's already testing a new type of engine it says will eventually be capable of reaching Mach 5 (over 3,000 mph). The engine is designed for a small, unmanned hypersonic aircraft Hermeus is currently creating for the US Air

Force, but scaled to a bigger size, it will be able to power a passenger plane.

That passenger plane is a long way away -- Hermeus hopes to get it in the air for the first test flight before the decade is out, in 2029 -- but because its technology has to be built almost entirely from the ground up, the company is already planning it out.

For a start, it will be much smaller than current airliners and even Concorde, which had a capacity of around 100 passengers.

"To help us size the aircraft, we basically built a business model for an airline," says AJ Piplica, CEO of Hermeus. "We focused on the business class and first class travelers, and then played around with some parameters such as speed and operating costs. What came out of that was an aircraft with a 20-passenger cabin," he adds.

That's not far from the capacity of a large business jet, which means there will be just one class.

"We expect it to be profitable at today's business class prices," says Piplica, with the caveat that it's hard to gauge how much people will be prepared to pay to fly five times faster, because "you can't really answer that question until there's a product out there and you have the real data." 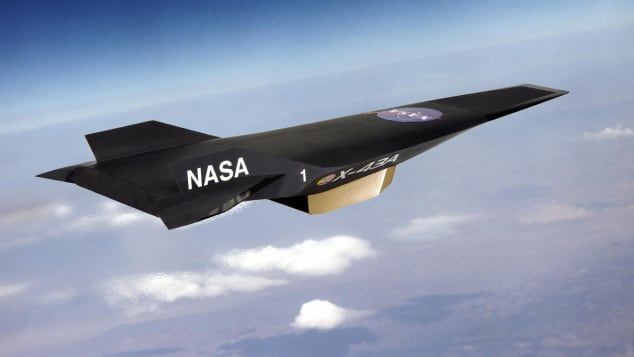 The NASA X-43A is the fastest aircraft powered by an air-breathing engine.

The range of the plane will be about 4,000 nautical miles, enough for transatlantic routes such as New York to Paris, but not for transpacific routes like LA to Tokyo, which would require a stopover.

Routes over land, such as New York to LA, are out of the question due to noise regulations: breaking the sound barrier comes with a loud boom, which usually must happen over water.

To understand how daring the idea of a Mach 5 passenger plane is, it's useful to look at flight speed records.

Because that flight only lasted a few seconds, the record for the longest sustained flight above Mach 5 belongs to the Boeing X-51, another unmanned experimental aircraft, which in 2013 flew for over three minutes at Mach 5.1 (about 3,400 mph). Both aircraft had to be launched from altitude by a B-52 bomber, and then brought up to speed by a rocket, highlighting the intricacies of these type of high-speed flights.

For aircraft with humans on board, the current absolute speed record is Mach 6.7 (4,520 mph), set in 1967 by the X-15. It was basically a rocket with a seat, designed to achieve the record, and also had to be launched from altitude by a B-52.

For an air-breathing aircraft -- that is, powered by jet engines rather than a rocket -- capable of taking off and landing by itself, the speed record is "just" Mach 3.3 (about 2,200 mph), set by the SR-71 Blackbird, a military spy plane, in 1976.

The top speed of Concorde, one of only two supersonic passenger planes to have flown commercially, was Mach 2.04 (1,350 mph).

The proposed Hermeus passenger aircraft, therefore, would beat the current record for the fastest air-breathing plane by a large margin, and by flying for an extended time at Mach 5, it would outclass an achievement currently in the realm of unmanned experimental vehicles (of course, other aircraft might beat these records in the future before Hermeus does). 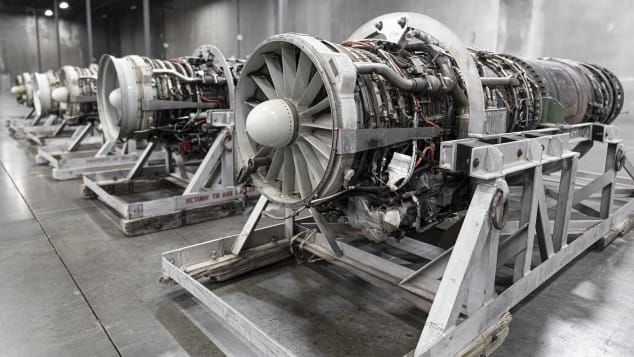 Hermeus is using hybrid technology in its engines.

It's unsurprising, then, that the initial focus of the company is on the engine. Tests started in February 2020 for a new type of engine design, based on an existing model used in fighter aircraft and manufactured by General Electric.

It will be a hybrid of two traditional technologies: a turbojet, which is similar to what airliners use, and a ramjet, a type of engine that only works at supersonic speeds and above. Initially, the engine will power Quarterhorse, the sleek hypersonic drone that Hermeus is developing through a $60 million partnership with the US Air Force.

Interestingly, when designing a jet engine to go faster, parts are removed rather than added. In a turbojet, the air enters from the front and is first compressed (to increase its energy potential) by rotating blades, then mixed with fuel and ignited. The resulting hot gas is blasted out through the back of the engine, pushing the plane forward.

Above Mach 3, however, there's no need to compress the air: It will compress itself upon entering the engine, simply by having to slow down so much.

Therefore, for speeds above Mach 3 and up until Mach 6, an engine type called ramjet is often used -- so called because it literally rams into the air. It has no moving parts, unlike turbojets, but it doesn't work at all at speeds below Mach 3.

Hermeus will use its hybrid engine in turbojet mode when taking off and landing, as well as at subsonic speeds. Then, the engine will gradually reconfigure itself into a ramjet mode as it reaches Mach 3 and until Mach 5.

"The turbojet portion and the ramjet portion by themselves are mature technologies that we've been using for 50 years. The trick is to put them together, so we designed our own architecture around an off-the-shelf turbojet engine and then built out from there," says Piplica. 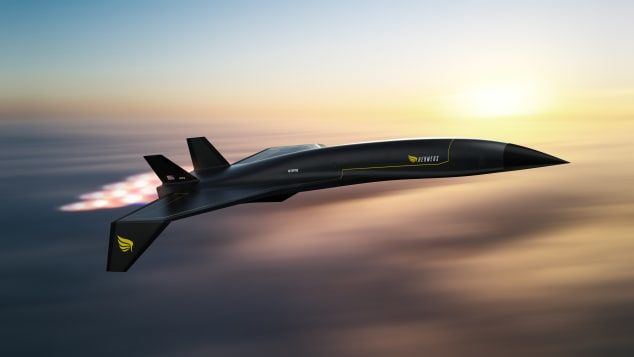 There's a whole host of problems that Hermeus isn't even working on at the moment, such as what type of sustainable fuel to use -- since consumption will be much higher than current jets -- and the extreme temperatures that the fuselage of a hypersonic plane must be able to withstand.

The speed of Concorde, which traveled at less than half the projected speed of Hermeus, was limited precisely by temperature, with windows and other internal surfaces becoming warm to the touch by the end of a flight.

The SR-71 Blackbird, on the other hand, had to be made of titanium, a rare metal that can withstand extreme heat, and the cockpit glass had to be made of quartz, with its exterior temperature reaching 600 F during a mission.

In response to skepticism over Hermeus' chances of success and the need for potentially enormous amounts of funding, Piplica brings up an analogy with

"I think people asked the same questions about the new space industry in the early days of SpaceX," he says. "Folks looked at getting into orbit and said, this should be taking a billion dollars, but SpaceX did it for $90 million, with Falcon 1."

Hermeus is planning to fund itself by developing various aircraft on the way to its passenger plane, similarly to SpaceX's development of its Falcon 1, Dragon, Falcon Heavy and Starship rockets, which ultimately serve a vision of interplanetary spaceflight while also generating revenue by working with NASA and commercial partners.

"There's really nothing like Hermeus, although many similar projects have come and gone in the past," says Richard Aboulafia, an aviation analyst at Teal Group. "It never seems to work out. If they can magically create a hypersonic transport in the late 2030s, and the ticket price is in the business class range, then yes, that will be successful. But the odds of this happening are somewhere in the 1% range."

If and when a hypersonic passenger plane will become a reality, what will it be like to fly on it?

"It'll be pretty similar to Concorde," says Piplica. "You'll be accelerating for a longer period of time than you do on today's aircraft, where you feel pushed back in your seat for about 30 seconds to a minute or so.

"That experience will last for maybe 10 to 12 minutes. But once you're up at Mach 5, at 100,000 feet or so, it'll be a really smooth ride. There's not a lot of air traffic up there, and the atmosphere is relatively benign."