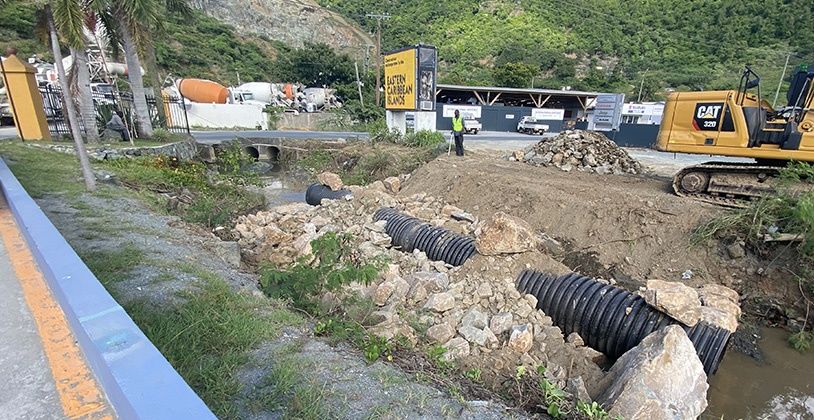 Works commenced yesterday, November 1 on the Fish Bay Road Rehabilitation Project.
Phase one consists of the building of the by-pass road to allow for the continuation of traffic and to reduce traffic disruption during the execution of this project.

According to the government, once the bypass is completed, works will commence to remove and replace the existing culvert with a new larger one, which will be followed by complete drainage works on both sides of the road, the erection of a retaining wall structure and ending with a full road rehabilitation. These works should not only improve the road safety but also reduce the impact caused by heavy rains in the area.

The contractor, Autland Heavy Equipment Ltd. was awarded the six-month contract on September 24 valued at $1,799,499.68.

Neil Smith, Director of Programme Strategy at the Recovery and Development Agency (RDA) said, “This project is designed to eliminate the flooding issues in the Fish Bay area and to improve the quality of this transportation artery to the benefit of residents, and businesses alike.”

This is the final of eight road projects to be completed by the RDA on behalf of the Government of the Virgin Islands with financing from the Caribbean Development Bank (CDB) Reconstruction and Rehabilitation Loan facility.

Other priority projects currently being executed by the RDA include the West End Ferry Terminal, Halls of Justice (Magistrate’s Court), the Eslyn Henley Richiez Learning Centre, the Installation of Solar Facilities on identified public buildings, the RVIPF Marine Base, the Attorney General’s Chambers and the Vanterpool Administration Building in Spanish Town, Virgin Gorda.

Later this week, there will be an official handover of the Zion Hill Reservoir, the final of three reservoirs projects to be completed by the RDA.
#the Virgin Islands
Add Comment