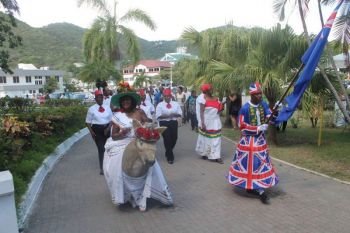 Not held since the passage of Hurricanes Irma and Maria in September 2017, BVI/USVI Friendship Day celebrations will be held on Saturday, October 19, 2019 in St Thomas, US Virgin Islands.

The Virgin Islands (VI) delegation to the 46th Celebration of BVI/USVI Friendship Day, under the theme ‘46th Sapphire Celebration of Camaraderie, Community, & Culture’, will be led by Premier and Minister of Finance, Honourable Andrew A. Fahie (R1).

Governor Albert Bryan Jr will be leading the USVI delegation.

Premier Fahie, in a statement during the Seventh Sitting of the First Session of the Fourth House of Assembly of the Virgin Islands today, October 17, 2019, said following the change in administration in both territories, “counterparts in the Office of the Governor, USVI and the Office of the Premier, BVI, held several meetings to discuss the reconvening of official channels for communication.”

Premier Fahie also disclosed that, following a series of discussions, it was concluded that the format for activities to commemorate BVI/USVI Friendship Day should be changed to ensure that the day proceeds in a more cordial and less ceremonial fashion, which is reflective of the friendship and mutual respect, cultural identity, ancestral connections, and familial ties which bind both territories.

“All the activities of the day will now proceed under a new mutually agreed format. The toasts will be reflective of our commonalities and unified purpose in this era of recovery and resilience. The previously agreed sequence of toasts will be replaced by other thematic toasts. Additionally, the new mutually agreed format will eliminate the level of formality previously exercised, in the spirit of true Friendship both territories share.”

Premier Fahie said his Government looks forward to the celebrations of the Greater Virgin Islands because despite the different nationalities, “we are still one Virgin Islands, one people.”
Add Comment