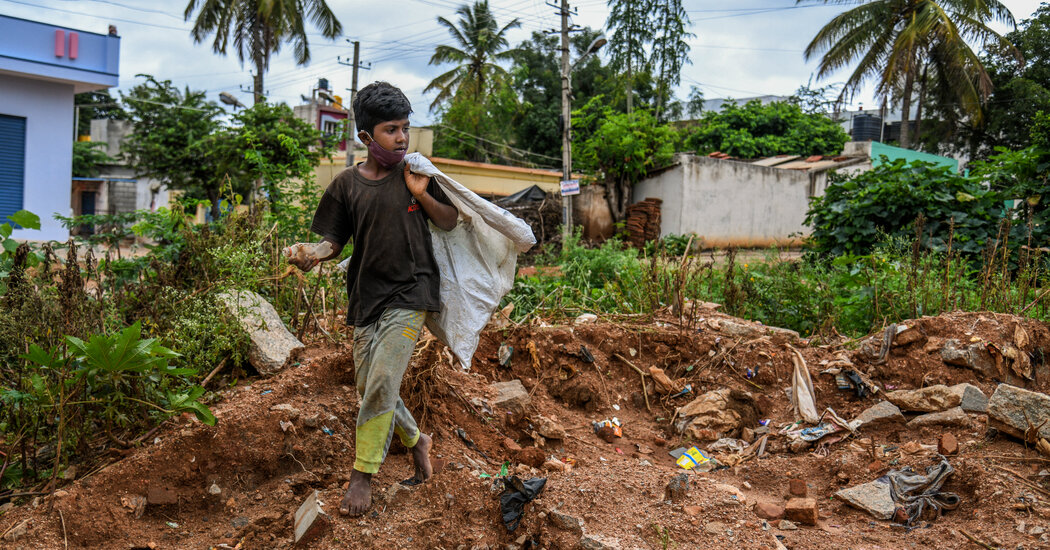 As Covid-19 Closes Schools, the World’s Children Go to Work

Former students are taking illegal and often dangerous jobs in India and other developing countries, potentially rolling back years of progress in social mobility and public health.

Every morning in front of the Devaraj Urs public housing apartment blocks on the outskirts of the city of Tumakuru, a swarm of children pours into the street.

They are not going to school. Instead of backpacks or books, each child carries a filthy plastic sack.

These children, from 6 to 14 years old, have been sent by their parents to rummage through garbage dumps littered with broken glass and concrete shards in search of recyclable plastic. They earn a few cents per hour and most wear no gloves or masks. Many cannot afford shoes and make their rounds barefoot, with bleeding feet.

“I hate it,” said Rahul, an 11-year-old boy praised by his teacher as bright. But in March, India closed its schools because of the coronavirus pandemic, and Rahul had to go to work.

In many parts of the developing world, school closures put children on the streets. Families are desperate for money. Children are an easy source of cheap labor. While the United States and other developed countries debate the effectiveness of online schooling, hundreds of millions of children in poorer countries lack computers or the internet and have no schooling at all.

United Nations officials estimate that at least 24 million children will drop out and that millions could be sucked into work. Ten-year-olds are now mining sand in Kenya. Children the same age are chopping weeds on cocoa plantations in West Africa. In Indonesia, boys and girls as young as 8 are painted silver and pressed into service as living statues who beg for money. 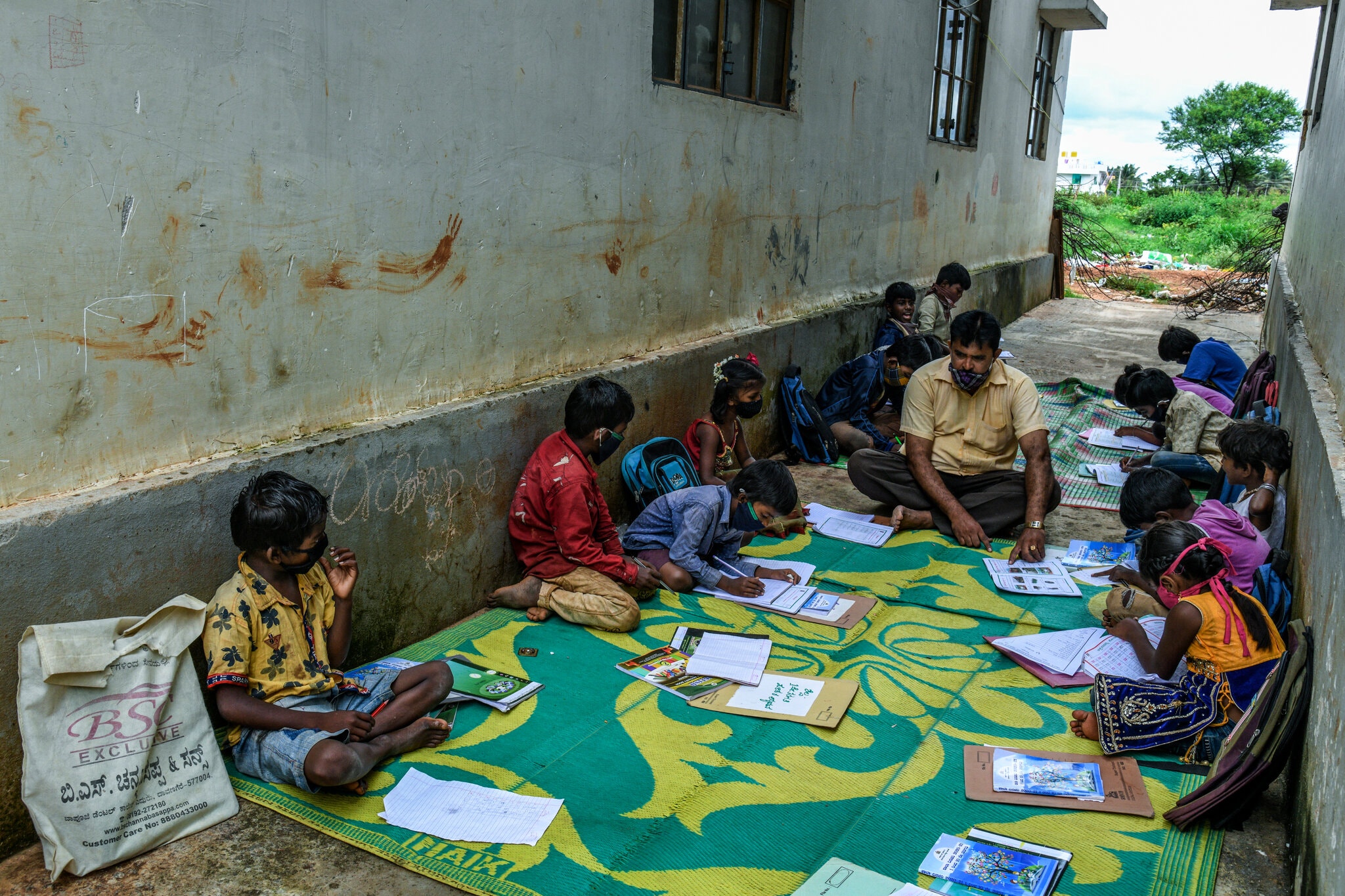 A teacher gave lessons in the space between buildings in Tumakuru this month. India has ordered elementary and middle schools to remain closed indefinitely.

The surge in child labor could erode the progress achieved in recent years in school enrollment, literacy, social mobility and children’s health.

“All the gains that have been made, all this work we have been doing, will be rolled back, especially in places like India,” said Cornelius Williams, a high-ranking UNICEF official.

Child labor is just one piece of a looming global disaster. Severe hunger is stalking children from Afghanistan to South Sudan. Forced marriages for girls are rising across Africa and Asia, according to U.N. officials, as is child trafficking. Data from Uganda showed teen pregnancies shooting up during pandemic-related school closures. Aid workers in Kenya said that many families were sending their teenage girls into sex work to feed the family.

Other aspects of society have been allowed to reopen. Why is it, frustrated children’s advocates ask, that bars, gyms, restaurants and subway systems are now operating but not schools?

Mr. Williams said leaders who “really believe in education” should use those resources on schools, and he questioned why they were not.

“Is it because adults have agency and have the louder voice — and the power to vote?” he asked.

In Jakarta, the Indonesian capital, Surlina, 14, paints herself silver to resemble a statue and hangs around a gas station with an outstretched hand. Her mother is a maid and her father sold small sculptures before the pandemic robbed him of a job. At the end of each day she gives her earnings to her mother, who supplies her and her two siblings, 11 and 8, with the paint. 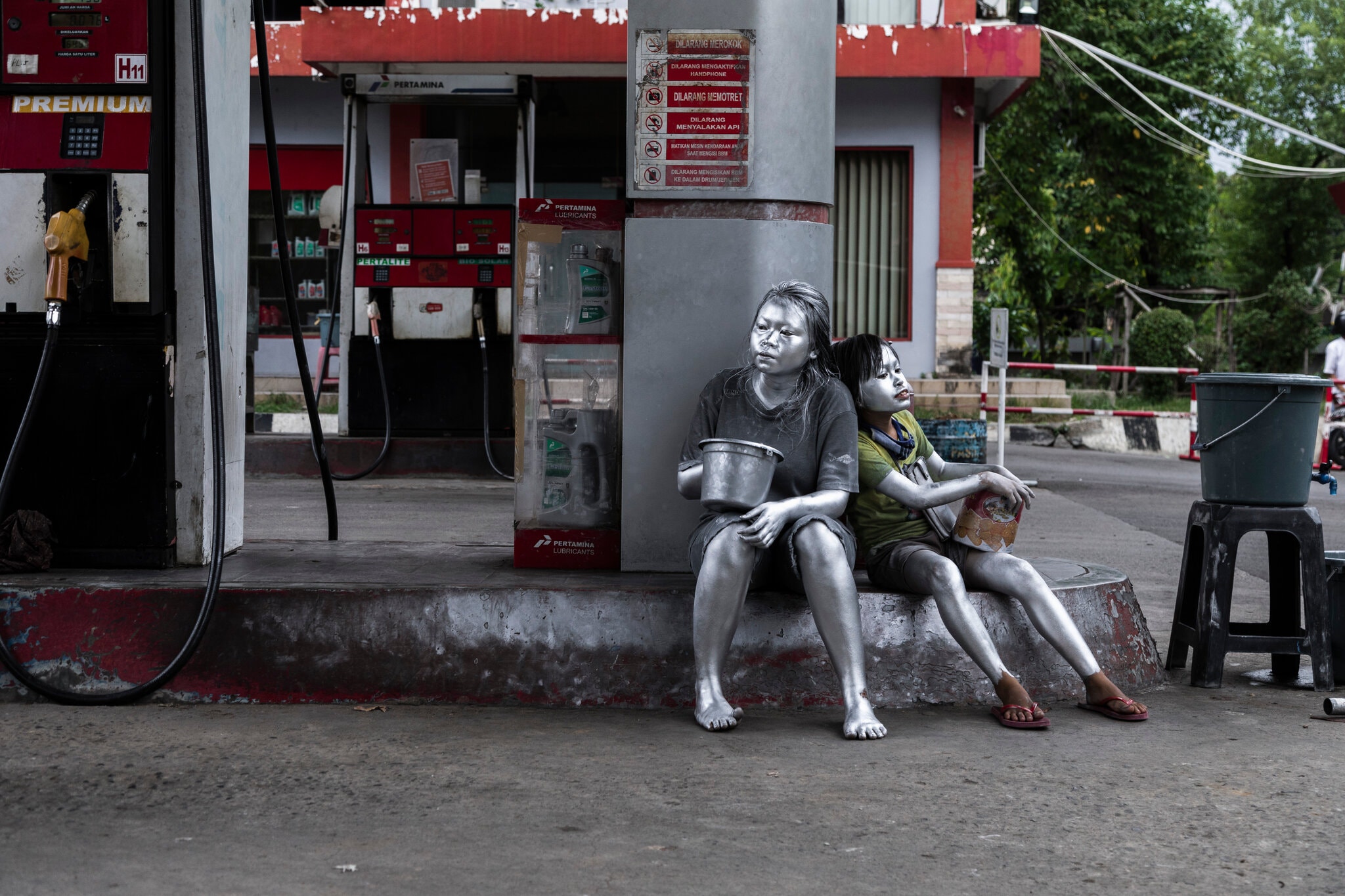 Surlina, left, 14, and Jani Anggraini, 8, painted silver and waiting at a gas station to ask passersby for money, in Jakarta, Indonesia, on Tuesday.

“I have no choice,” Surlina said. “This is my life. My family is poor. What else can I do?”

She sometimes tries to study from a sixth-grade workbook — she was going to school until it closed in March — but finds reading difficult.

“It makes me dizzy and no one helps me,” Surlina said. “I just give up.”

In India, the government has also shut down early childhood development centers for the poor. In recent decades, India had built a nationwide network of more than one million anganwadis, which means courtyard shelter in Hindi, that provided millions of young children with food, immunizations, clothes and some schooling, and contraceptives for poor women. But most anganwadis remain closed.

School-age children in India are now performing all kinds of work, from rolling cigarettes and stacking bricks to serving tea outside brothels, according to more than 50 interviews conducted with the children, their parents, teachers, labor contractors and child activists. Most of it is illegal. Much of it is hazardous. 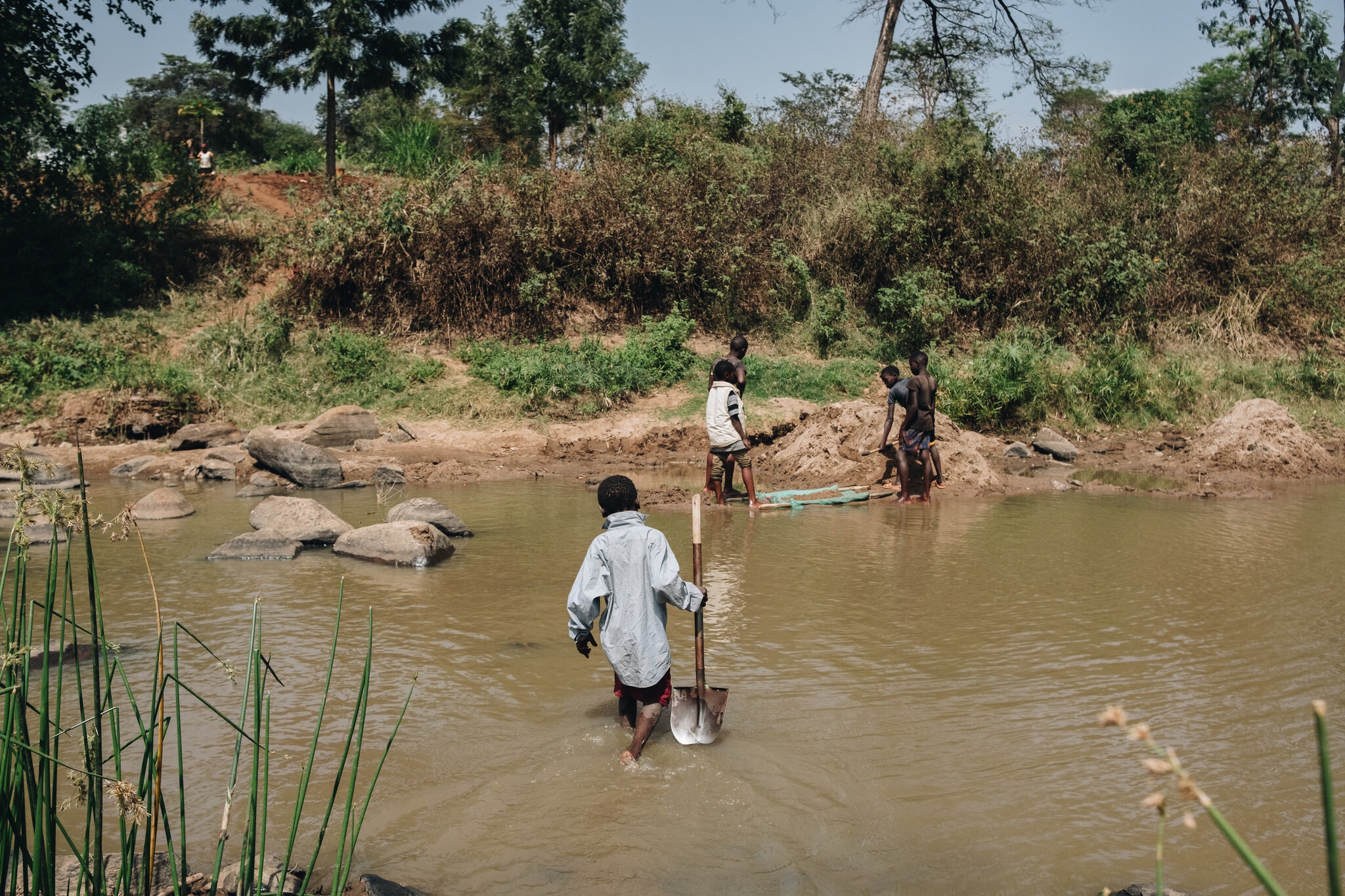 John, 10, carrying a shovel to harvest sand in Machakos County in Kenya on Saturday. Since schools were closed because of Covid-19, he collects and sells sand to help feed his family.

Saurabh Kumar, a sixth grader from a struggling family in Jharkhand State, works as a helper at a garage at the urging of his father. A few months ago, he tried to unfasten some sharp engine bolts and sliced his hand open.

“I could see down to the bone,” he said.

India already had a serious child labor problem because of high poverty levels, its population of 1.3 billion and its dependence on cheap labor. Shadowy fireworks and cigarette factories, textile sweatshops and loosely regulated construction sites often employ children. The authorities had been cracking down and enrolling children, especially girls, in school.

But as Nahida Ismail, a teacher in Bihar State, said, “The whole ecosystem around kids is breaking down.” 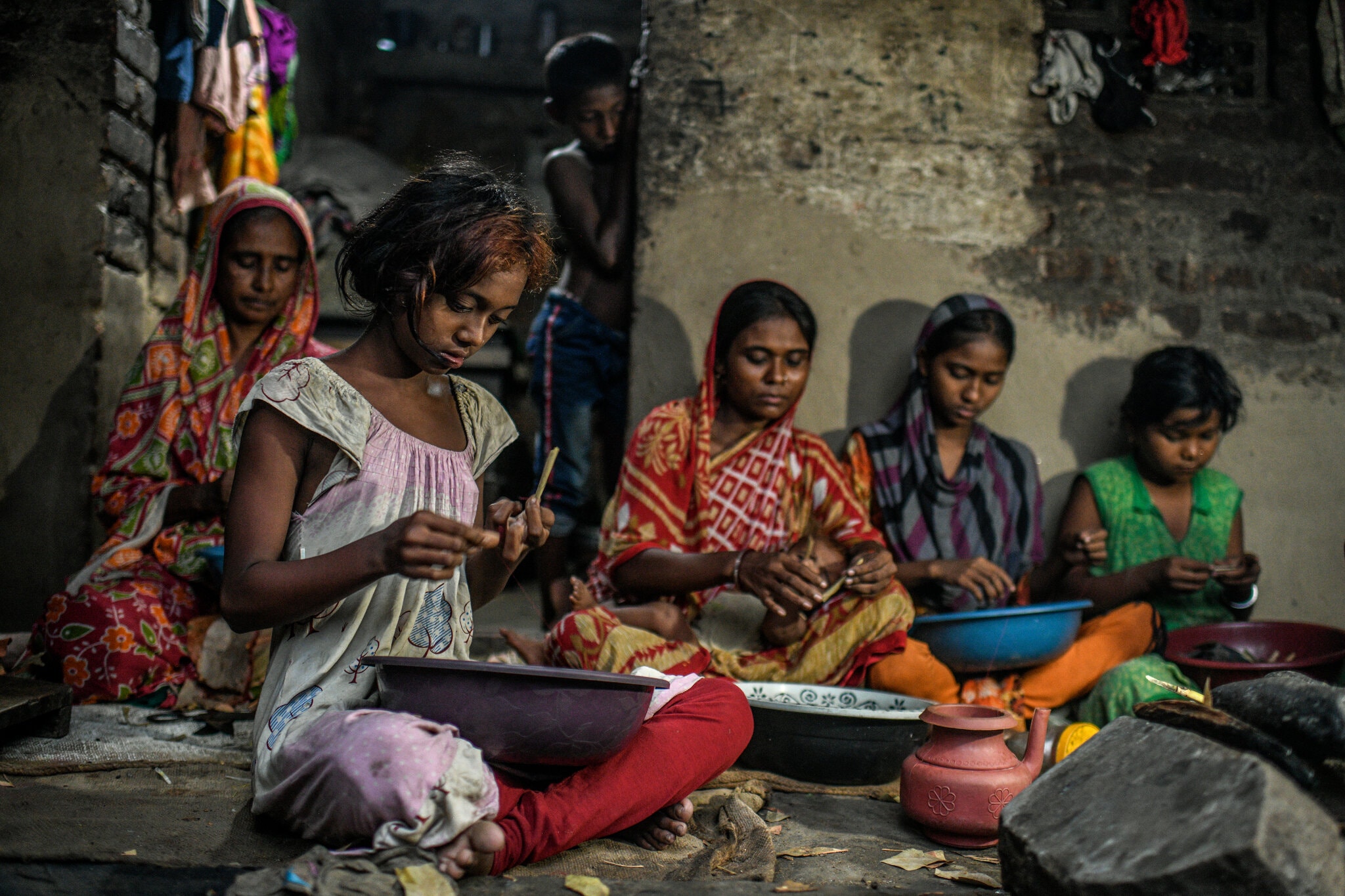 Payal Khatoon, second from left, 11, making bidi, a type of cigarette, with her family in Aurangabad, India. The recent surge in child labor threatens to erode many gains in children’s health and well-being.

On a construction site near Gaya, a town in Bihar, Mumtaz, 12, and his brother Shahnawaz, 10, struggled under heavy loads of gravel.

With a grimace, Shahnawaz hoisted a bucket atop his head. His skinny legs nearly buckled. He squinched his eyes tight, looking like he was about to cry. Around him stood men three times his age, just watching.

“I get headaches,” Shahnawaz said. “I can’t sleep at night. My body tingles.”

His older brother seems to have glimpsed his new future.

“I fear that even if school reopens, I will have to keep doing this, because of the family’s debt,” Mumtaz said.

“I wanted to join the army,’’ he added, using the past tense.


Mumtaz, left, 12, and his brother, Shahnawaz, 10, have been working at a construction site in Gaya, India. “I fear that even if school reopens, I will have to keep doing this, because of the family’s debt,” Mumtaz said.

Many child experts said that once children drop out and start making money, it is very difficult to get them back in school. India has ordered elementary and middle schools to remain closed indefinitely, affecting more than 200 million children, though some government teachers are making house calls and teaching in small groups. The central government has allowed high school students to visit teachers on campus, but many states have said no to that as well.

“They can end up becoming vectors of virus,” said Rajesh Naithani, an adviser to the education ministry.

Child rights activists say it is remarkable how little the school closures are being discussed. Speeches by India’s prime minister, Narendra Modi, and top ministers usually focus on opening up the economy, not the schools.