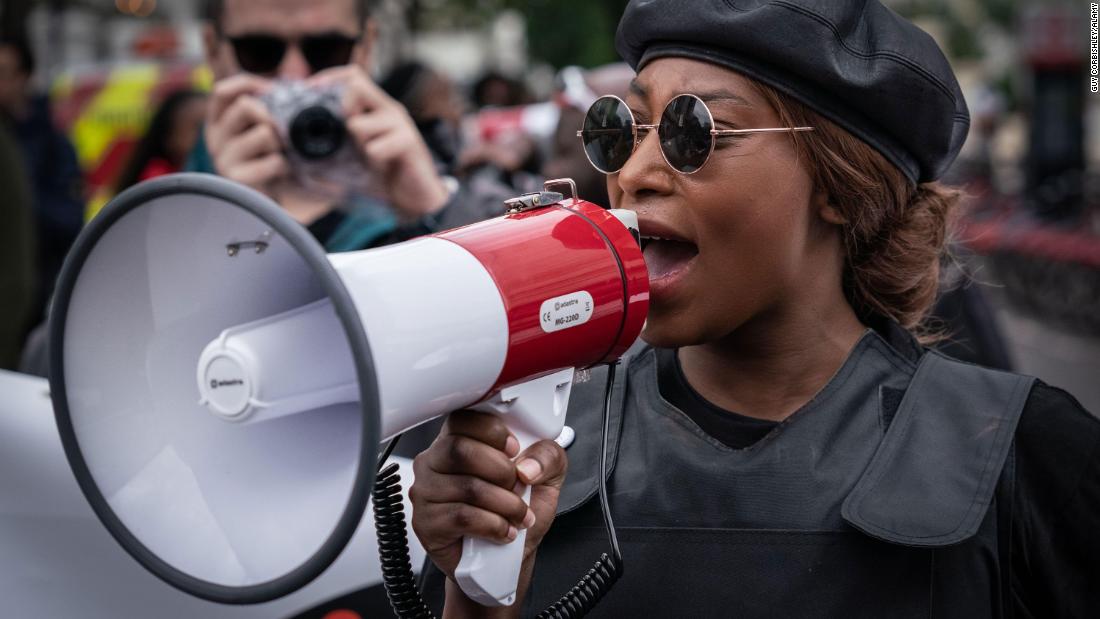 British Black Lives Matter activist Sasha Johnson is in critical condition after being shot in the head in London, according to her political party.

"It is with great sadness that we inform you that our own Sasha Johnson has been brutally attacked and sustained a gunshot wound to her head," the Taking the Initiative Party (TTIP) said in a Sunday statement. "She is currently in intensive care and in a critical condition."

The party said the attack happened "following numerous death threats as a result of her activism."

London's Metropolitan Police responded to reports of gunfire in southeast London about 3 a.m. local time Sunday morning, it said in a statement.

Police said paramedics transported a 27-year-old woman with gunshot wounds to a south London hospital, and that the incident appeared to have happened near a house party in Southwark.

The police statement said that at this early stage of investigation there was no evidence to suggest a targeted attack or that the woman "had received any credible threats against her prior to this incident."

Detectives from the Met's Specialist Crime Command (Trident) are conducting an investigation and looking to speak with anyone who was at the party in the Consort Road area of London, it added.

"A dedicated team of detectives is working tirelessly to identify the person or persons responsible for this shooting," said Detective Chief Inspector Jim Tele.

He added that "they need the public's help," and urged people to come forward if they witnessed or had heard information about the incident.

Tele added that while he recognized the incident "will have shocked those in the local community and further afield" he called on the public to "avoid speculating as to the motive or the circumstances behind it."

Johnson rose to prominence last year during the Black Lives Matter protests, as a leader of the TTIP, which has been called "Britain's first Black-led political party."

She is a mother of three, and also works to deliver food and groceries to families in need, according to the party, which called her "a strong, powerful voice for our people and our community" in its Sunday statement.

At a vigil hosted by Black Lives Matter UK on Monday evening outside Kings' College Hospital in south London, supporters and fellow activists huddled under a bandstand and joined in lively chants of support and prayer, accompanied by drumming and movement.

"Every time she grabbed the mic, she spoke the truth," one supporter told the vigil. "We need to make enough noise so she can wake up," the supporter added, met with cheers from the crowd.

Leo Muhammad, told CNN that Johnson is a "warrior, a young sister who has been thrust to the forefront of the struggle for justice in the UK."

Muhammad, a friend of Johnson, said that although the facts of the shooting were still being established, "whether it was targeted or [whether] she was in the wrong place at the wrong time, the fact is, nobody is spraying bullets into white communities, but it's a regular occurrence within the black community.

We should be very concerned about that kind of activity."

Campaigner Caul Grant told CNN that he was "absolutely devastated" to hear about what happened to Johnson, saying that although he has only known Johnson for about a year, she has had a "huge impact" on his life as a young person in the community.

"No justice, no peace," the crowd chanted.

Earlier Monday, Black Lives Matter UK hailed Johnson as a "young mother and fearless political campaigner who was at the forefront of many BLM protests last summer," in a message on Twitter.

Several British lawmakers also paid tribute to the dedicated activist in the wake of the shooting.

"Whoever carried out this dreadful shooting of Sasha Johnson needs to be caught quickly. Give any info you have to @MPSSouthwark. Reported death threats will need to be investigated," wrote Harriet Harman, a Labour Member of Parliament for Camberwell and Peckham, who also wished Johnson a "full recovery."

Diane Abbott, Labour MP for Hackney North and Stoke Newington, tweeted: "Nobody should have to potentially pay with their life because they stood up for racial justice."

David Lammy, Labour MP for Tottenham, described the news as "gut-wrenching" and said he was "Praying for Sasha Johnson, her family and friends that she makes a quick and full recovery."

Claudia Webbe, an MP for Leicester East, shared her "love and solidarity" with Johnson's family and friends following the incident.

Webbe said news of the shooting was "shocking" and that "all women should be safe on our streets" in a tweet.

"When I think of the brutal shooting of Sasha Johnson it reminds me that the culture of gun violence is all-consuming affecting whole communities & neighbourhoods. The bullet does not discriminate in its effect. But too many women become collateral damage in this 'culture of fear,'" Webbe said in a separate tweet.