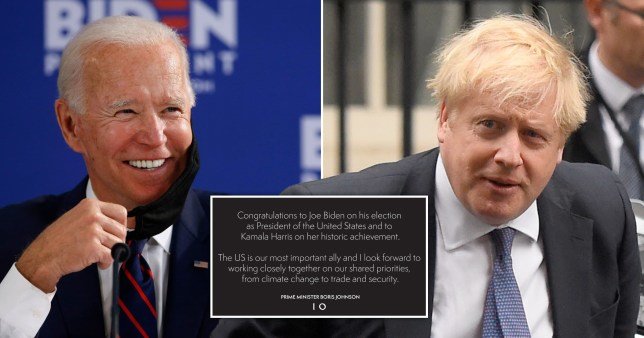 In a message to the President-elect and Vice President-elect Kamala Harris, he said: ‘The US is our most important ally and I look forward to working closely together on our shared priorities, from climate change to trade and security.’

This year’s election saw significant delays in several states due to a record number of postal votes, partly due to the coronavirus pandemic.

However Donald Trump’s legal team are still contesting many of the results, citing unsubstantiated claims of electoral fraud.

Labour leader Sir Keir Starmer tweeted: ‘Congratulations to Joe Biden on his election as President of the United States of America.

‘He ran a campaign on the values that we in the United Kingdom share – decency, integrity, compassion and strength.’

‘And I want to congratulate @KamalaHarris on being elected Vice-President, the first woman of colour to take that role.

‘Their victory is one for hope and unity over dishonesty and division. Millions of Americans of all backgrounds and ages have come together to vote for a better, more optimistic future.

‘This is also an important moment for the world. It is a chance to reassert America’s place as a force for good on the world stage. A nation that will work with Britain and other allies to defeat this pandemic and fight climate change.

‘Joe Biden and the Democrats have always shared Labour’s values and the links between our two parties remain strong.

Joe Biden and the Democrats have always shared Labour’s values and the links between our two parties remain strong.

I am looking forward to building on this and forging an even stronger relationship between the UK and the USA.

‘I am looking forward to building on this and forging an even stronger relationship between the UK and the USA.’

SNP Westminster leader Ian Blackford said the victory ‘gives great hope to progressives here in Scotland and around the world’.

He tweeted: ‘The integrity of democracy demands this result is recognised in America and internationally.

‘The Prime Minister must arrange an early call with President-elect Biden to officially acknowledge this result and congratulate him on an historic achievement.

‘In the UK, Boris Johnson must reflect on his own reputation as ‘Britain Trump’.

‘His extreme Brexit policies, and decision to align himself so closely with the narrow politics of Donald Trump have left the Tory Prime Minister increasingly isolated on the world stage.’

‘London looks forward to working with you – it’s time to get back to building bridges, not walls.’

Congratulations @JoeBiden and @KamalaHarris on your well-deserved win.

London looks forward to working with you — it's time to get back to building bridges, not walls. 🇺🇸 🇬🇧 pic.twitter.com/oZoCDvtT9v

Labour deputy leader Angela Rayner tweeted: ‘A massive congratulations to the 46th President of the USA @JoeBiden and Vice-President @KamalaHarris.’

‘The world is counting on him to urgently pivot the USA to a trajectory of net-zero carbon emissions and ecological sustainability.’