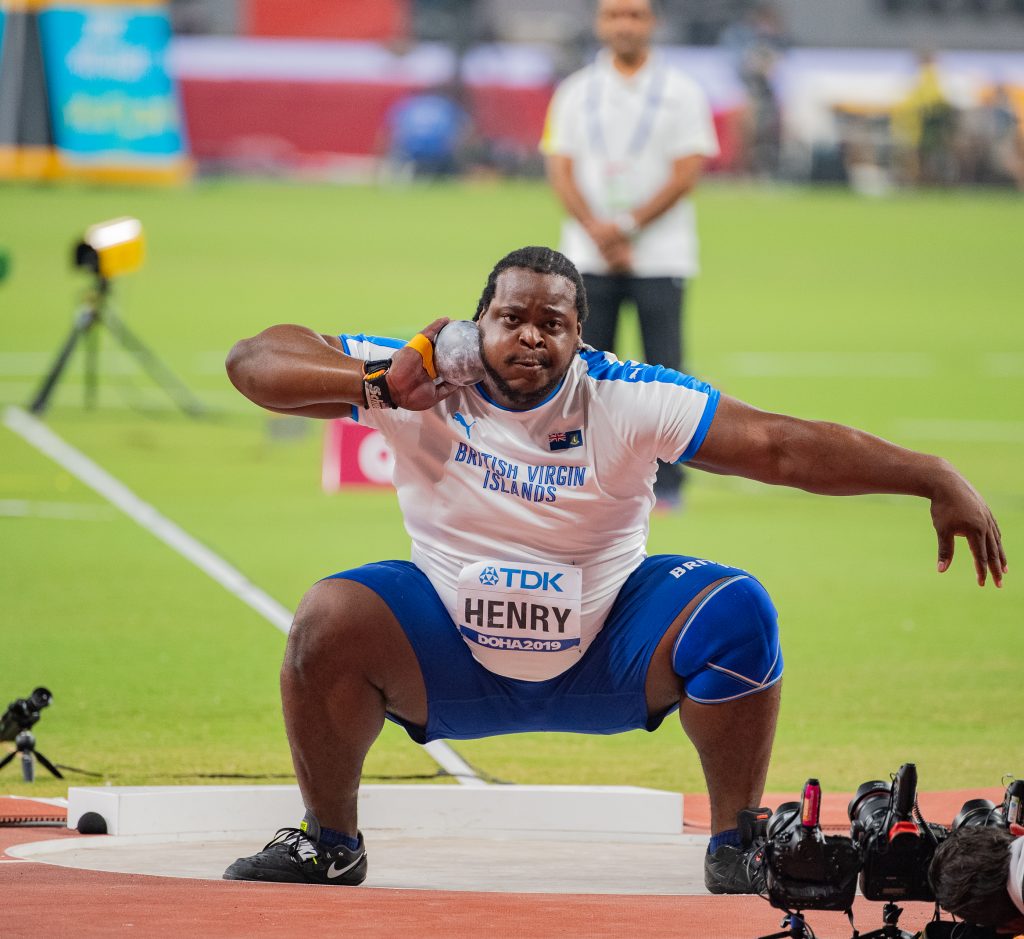 National shot-put champion and Olympian Eldred Henry has pulled out from the Tokyo 2020 Olympic Games this summer due to an elbow injury.

This is according to a media release from the BVI Olympic Committee which said that Henry communicated his decision to the BVI Athletics Association’s President Steve Augustine on Monday June 28.

Henry said the decision was one that was very tough to make but it had to be done due to the extent of the injury to the elbow.

“It is with deep sadness that I have had to make the tough call not to compete in the upcoming Tokyo 2020 Olympic Games in Japan this summer. The injury in the elbow of my throwing arm is one that has been an underlying issue for a few months but which was being treated and kept at bay through my pre-COVID-19 training regime which allowed me to compete at the beginning of this season,” he stated.

“Unfortunately, the injury flared up during my warmup at the 2021 Track Meet on May 15 in South California and required further investigation including an MRI,” he added.

Competing with injury could end career

Henry also said that due to limited time before the Olympic Games which commences on July 23, it would have been a major gamble to compete since the injury requires more time for a full recovery.

He said, “The treatment and full recovery process requires more time than is left for the Tokyo 2020 Olympic Games and after consultation with my coach Tony Dougherty and doctors working on the treatment, I conferred with the BVIAA and BVI Olympic Committee and it was agreed that I would not compete in Japan and risk putting my athletic career in jeopardy.”

“Instead, I will concentrate on making a full and proper recovery to regain my optimal performance level for the future Games coming up in 2022 and leading up to Paris 2024. I am grateful for all the support I receive from both the BVIAA and the BVIOC and feel frustrated and disappointed not to be able to represent my country at the Olympics this year. I will be in daily contact with the athletes attending Tokyo 2020 and look forward to supporting the team all the way,” Henry added.

BVI Athletic Association’s President Augustine wished Henry all the best in his recovery process and said that the BVI will truly miss his presence in this year’s Games.

“Eldred Henry is clearly one of our leading athletes and I was very sorry to learn that the extent of his injuries will now take him off the roster for the Tokyo 2020 Olympic Games. Our primary sympathies are with Eldred whose training and focus were geared towards the ultimate competition at these rescheduled Olympics,” Augustine said.

He added, “We know that in the best of conditions he would have done us proud and are in complete agreement that he should not compete while recovering from an injury that will directly affect his performance and possibly his future athletic career. We understand that the intensive treatment programme Eldred is undergoing is designed to deliver a solid result and we wish him all the best on his road to recovery and training to get him back on track for the upcoming competitions including the World Championships in Oregon, USA in July 2022 Oregon.”

Henry was the first VI athlete to qualify 2020 Olympics

Henry was the first of the VI’s athletes to qualify for the Tokyo 2020 Olympic Games when he threw the shot put a distance of 21.47 metres at the Kingsville, Texas Meet in 2019 to also secure the outdoor national, OECS, GMAC and NCAA DII records with his personal best throw.

He also holds the indoor shot put national, OECS and NCAA DII records with a throw of 20.61 metres and is a CAC bronze medalist.

Henry’s highest world men’s shot-put ranking is 20th and he is ranked 6th in the region.

Tokyo 2020 would have been Henry’s second Olympics with his first appearance at the Rio 2016 Games.