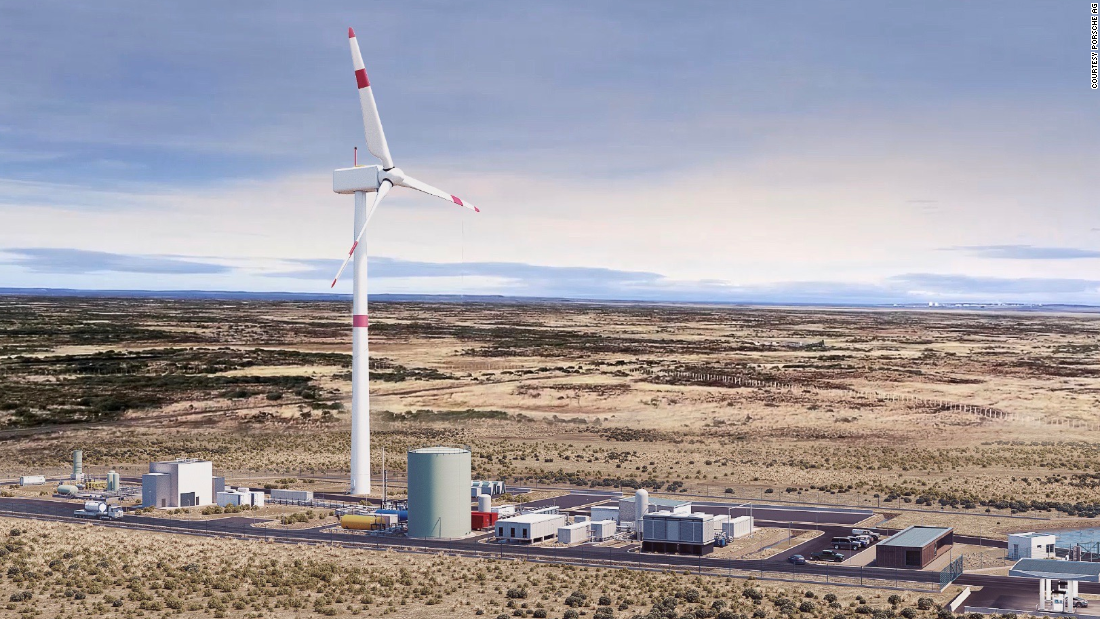 Can wind, water and air combine in a new energy revolution? This Chilean startup wants to find out

In Punta Arenas in Chile's Magallanes Region, startup Highly Innovative Fuels (HIF) is establishing what it calls a first-of-its-kind facility which it hopes will be an initial step on the road to an energy revolution.

HIF's "Haru Oni" project is a 3.7-hectare, $55 million site intended to demonstrate a viable commercial process for turning wind, water and air into synthetic fuels that can be used to power everything from cars to ships to airplanes, while slashing carbon emissions.

Comprising a wind turbine, carbon capture system and facilities it says are capable of manufacturing 130,000 liters of fuel a year, the project is still under construction but is scheduled to become operational later this year and begin producing synthetic gasoline.

Harnessing the power of green hydrogen 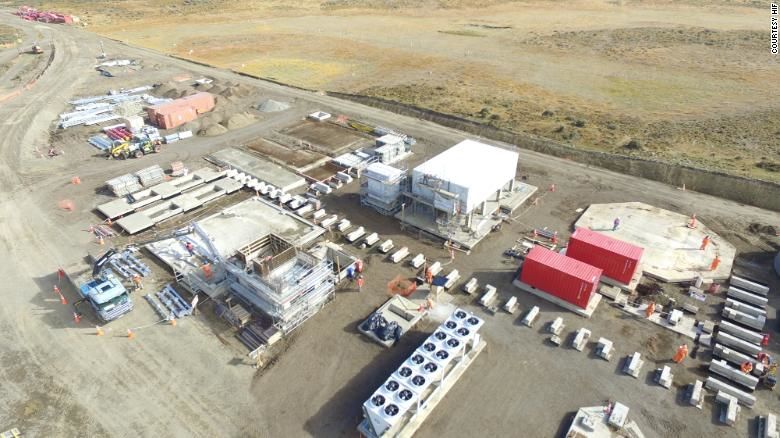 An aerial shot of the Haru Oni building site, including the cooling system, bottom center, power control center, above, and foundations for a water tank, on the right.

HIF's manufacturing process uses wind-generated electricity to separate water into hydrogen and oxygen through a process called electrolysis. Meanwhile, carbon dioxide is captured from atmospheric air and industrial sources. Hydrogen is combined with the carbon dioxide and synthesized into eFuels.

Meg Gentle, HIF USA executive director, said the process can be used to create all kinds of everyday fuels, including methanol, propane, gasoline and jet fuel, which can be used by standard engines without modification. "Basically, anything that could be refined from crude oil could also be made in this manner," she said.

Much of the focus for decarbonizing transport has been on the production of electric vehicles (EVs). Gentle argued, "we don't need eFuels to compete against EVs," and suggested EVs and eFuel can exist side by side -- the latter helping to accelerate the decarbonization of the transport sector while using existing cars and infrastructure such as pipelines and gas stations.

But producing eFuel is currently very energy intensive, making it more expensive than gasoline. One liter of diesel equivalent eFuel costs nearly $6 before taxes, according to a 2019 paper by the UK's Royal Society scientific institute, although that depends on the cost of the electricity. 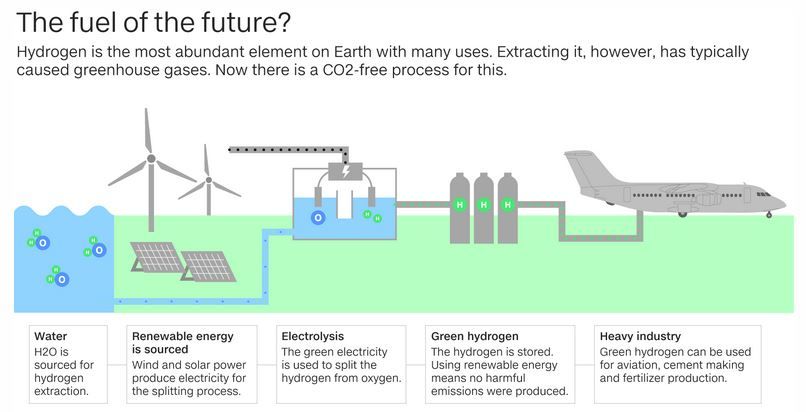 The hydrogen HIF will use is known as "green" hydrogen -- hydrogen generated from renewable sources, as opposed to "gray" hydrogen, derived from fossil fuels, or "blue" hydrogen, which uses non-renewable resources like gray hydrogen but captures most carbon emissions during its production.

HIF describes its eFuels as carbon neutral because their combustion releases the same carbon dioxide that was captured in the manufacturing process. Gentle framed the process as a "CO2 recycling system."

"The environmental credibility of projects like this hinges on the processes and sources of CO2 used," said Anna Korre, professor of environmental engineering at Imperial College, London.

"If the CO2 input is captured from the atmosphere and renewable electricity is used, the fuel will be near zero (net carbon emissions)," explained Mark Barrett, professor of energy and environmental systems modeling at the UCL Energy Institute.

Gentle said the Chile facility will use a "very small volume" of waste CO2 generated by local industry, alongside a majority from direct air carbon capture.

Korre said a Life Cycle Assessment study of the product would be needed to back up any claims of carbon neutrality.

eFuels and the transport sector

For the Haru Oni facility HIF is partnering with Siemens Energy and Porsche, among others. Siemens Energy will receive around €8 million ($9 million) to support the project from the German government, as part of its national hydrogen strategy. Porsche is investing around €20 million ($22 million) in the project and will buy the eGasoline produced by Haru Oni for use in its motorsport fleet.

HIF is already exploring synthetic jet fuel -- eKerosene -- and is looking to partner with airlines to pilot the technology. At the same time, Gentle concedes the current process is less efficient than that producing HIF's eGasoline. 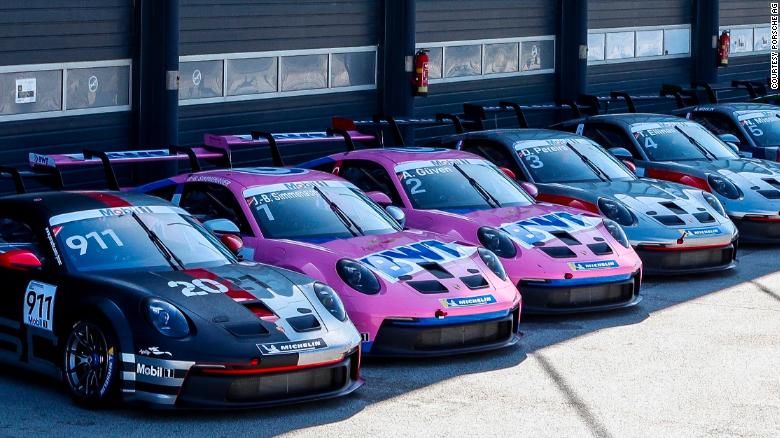 Porsche 911 GT3s line up at the Porsche Mobil 1 Supercup in Zandvoort, the Netherlands, in 2021. Porsche says it will begin using eFuel created by HIF's Chile operation for the race.

"Synthetic fuels do have the potential to reduce emissions in areas of transport that can't currently be powered by batteries," said Korre. "There are also some sustainability and safety problems relating to batteries, including concerns around mineral resources extraction and related pollution, that synthetic fuels would avoid."

"We are seeing a rapid scale-up in scientific and engineering efforts and these are being accelerated by security of supply concerns around fossil fuels," she added.

Gentle spoke at a panel at the World Government Summit in Dubai, on March 28, where David Livingston, senior advisor to US Special Presidential Envoy for

Climate John Kerry, said that the increased price of natural gas as a result of the Ukraine conflict could accelerate more activity in the US hydrogen energy sector.

HIF's demonstration plant will be able to produce 1,000 barrels of eGasoline per day, said Gentle. That pales in comparison to its long-term plan for 12 commercial-sized plants spread across Chile, the US and Australia, at a cost of $50 billion. Each plant would be capable of producing 14,000 barrels a day. To do so would require 2,000-megawatts of power and capture around 2 million metric tons of carbon dioxide per year, she explained. 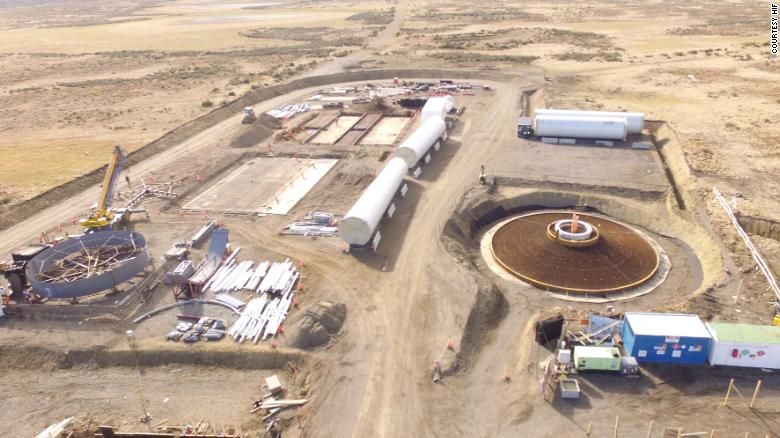 An aerial view of the construction site, including the foundations for its wind turbine.

At some stage in this significant scaling up, Gentle says production costs will reduce to the point where HIF will be competitive with fossil fuel prices. She compared the path to the one already walked by renewables like wind power, that needed government support before reaching a tipping point.

"Over the space of this decade, we want to be competitive, head-to-head with the fossil-based alternatives," Gentle said.

Barrett remains skeptical that it will be able to do so without outside help. "Zero carbon fuels will always cost much more to produce than fossil fuels," he argued. "Either emission limits have to be imposed on sectors like aviation, or high carbon taxes on fossil fuels, or a subsidy on zero carbon fuels; or some combination thereof."

With such grand plans and a proof of concept in progress, you'd be forgiven for thinking HIF sees itself as an energy disruptor.

The HIF executive director sees it otherwise. "So many times, disruptors destabilize things until they get newly adopted," said Gentle. "We view this as more creating an additional stabilizing factor in this journey to decarbonize."

"This is a win-win for environmental, energy and economic security," she added.