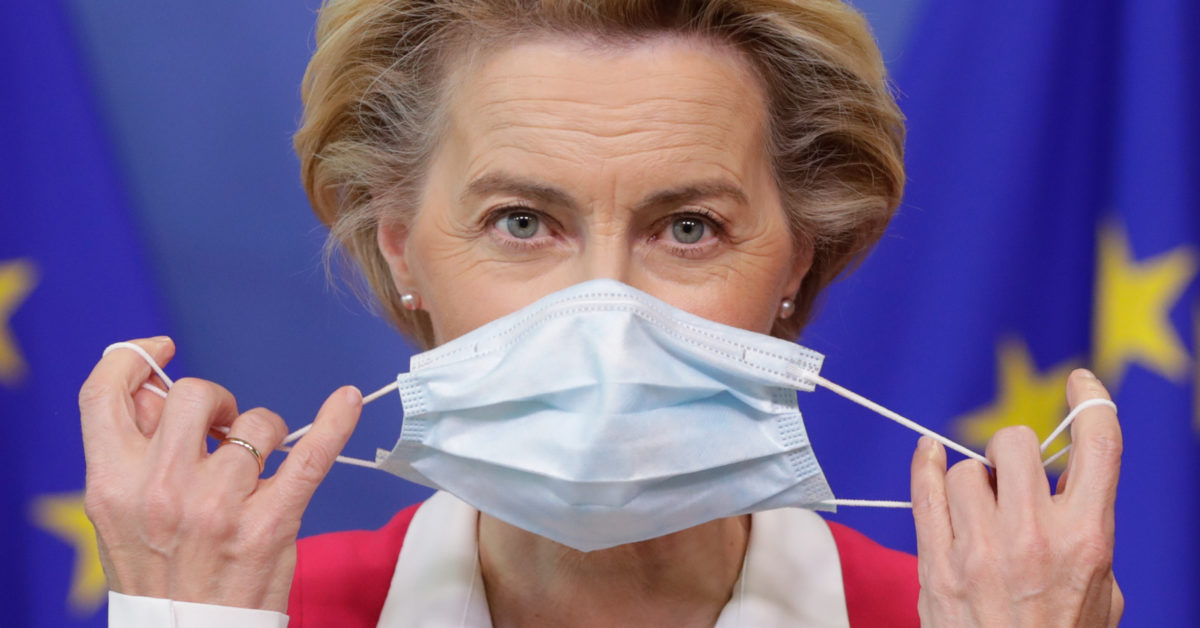 It's not quite Europe First, but when it comes to coronavirus vaccines, the European Commission warned Thursday that it won't stand for EU Second.

Amid an angry fight with the pharmaceutical giant AstraZeneca over a vaccine production shortfall, the Commission said it will seek to impose a mechanism on Friday by which EU countries will be able to block vaccine exports if the EU's own purchase orders have not yet been filled.

It is a drastic step, raising a specter of Trumpian protectionism that goes against the EU's core self-image as a proselytizer of free trade, proponent of multilateralism and professed champion of global equity, particularly in the distribution of vaccines, which has been a personal priority of Commission President Ursula von der Leyen since the outset of the pandemic.

Word of the Commission's decision sent diplomats and pharmaceutical company executives racing to assess the potential ramifications of the move, which at the very least will impose new bureaucratic hurdles, particularly in the form of customs paperwork. But if restrictions are imposed to the fullest extent, it would potentially cut off vaccine supplies to many other countries relying on the EU's production capabilities, including neighbors such as the U.K., close partners like Australia and Canada, and an array of developing nations.

The move highlighted the already intense — and still mounting — pressure on EU national leaders and top officials in Brussels to speed up the delivery and deployment of vaccines, as the pandemic continues to rage. Even before the news of AstraZeneca's severe production shortfall, EU heads of state and government had expressed dismay over a small production slowdown by Pfizer, which is producing a vaccine in partnership with BioNTech. Officials have also voiced frustration over a sense that the EU is badly trailing countries like the U.S, U.K. and Israel in vaccinations.

"This goal is clear that we want to bring vaccines to our citizens and to get as many of them vaccinated as soon as possible," a second EU official said Thursday. "We are now in a situation where we have lack of clarity on vaccine deliveries ... so we are in a sense obliged to look for a solution."

Several officials said that the EU's new measures were targeted mainly at AstraZeneca, which a week ago abruptly announced that it would deliver roughly one-quarter of the vaccines that the EU planned to receive in the first three months of this year, leaving the bloc at least 75 million doses short of expectations. There was also particular ire over the fact that the U.K. had received shipments of the AstraZeneca vaccine made at plants in Continental Europe, but the company so far has refused to divert any supplies from two factories in Britain to make up for shortages at a facility in Belgium. The EU insists its contracts provided for the bloc to receive doses made at the U.K. plants as well as in the EU.

While leaders' fury has focused on AstraZeneca, World Trade Organization rules require the EU to implement any emergency restrictions universally and the broad scope of the new mechanism quickly fueled fears in capitals outside the EU that Brussels might not only restrict international shipments of the AstraZeneca vaccine but also of the BioNTech/Pfizer jab. Ultimately, the restrictions are to be imposed by the individual EU countries where factories are located, with EU guidance.

One diplomat whose country is relying on EU manufacturers for some vaccine deliveries urged calm, but acknowledged heightened anxiety worldwide. "We have to keep cool heads and we have to keep collaborating and focus on the details of what will be needed," the diplomat said.

Many countries had placed their trust in the EU for vaccine orders, viewing the bloc as more trustworthy and predictable than the United States, where former President Donald Trump had quickly announced plans to restrict vaccine exports. Most initial orders were placed before Trump lost the November election to Joe Biden. Some officials and diplomats expressed annoyance and suggested that the Commission felt compelled to impose the export restrictions as a result of the EU's own mismanagement of its vaccine strategy, including lax oversight of contracts and poor planning.

While EU officials insisted that their primary goal was to use the new mechanism to gather information about how much vaccine is being produced and where manufacturers intend to ship it, they also acknowledged that the export restrictions would allow the EU to make sure its own orders are filled before vaccine doses are permitted to leave the Continent.

Under the scheme, the EU will instruct its customs authorities to block vaccine exports unless they come with a prior authorization. That will allow the EU to prioritize shipments to its own countries before authorizing exports.

EU countries should only grant such authorizations after making sure vaccine-makers have delivered the doses promised in their “advanced purchasing agreements” with the EU, the first official said.

“I don't think that there is the overall intention of member states to refuse exports or to grant exports. It's simply a question of contractual arrangements the companies have ... There might be cases where, according to the criteria we will set out tomorrow in that implementing regulation, it will be advised not to grant the licence."

While both officials repeatedly insisted that the measure was not an export ban, that’s what it could effectively result in. Since both BioNTech/Pfizer and AstraZeneca are below their delivery targets for quarter one, EU countries could block exports up to the level of delivery targets.

Asked about that possibility and whether that meant other countries would lose out, the EU official said meeting international demand was the responsibility of vaccine-makers.

“It’s up to the companies themselves to ensure they can satisfy demand,” the official said. For the EU, the new export restriction “is a question of ensuring that the money that we spent produces vaccines for our citizens.”

Another risk is that countries could sue the EU at the WTO, although the EU could claim it was acting to address a “critical shortage” of essential products, or to protect national security and public health, all of which are recognized exemptions to the WTO’s normal ban on export restrictions.

“The WTO’s public health exception would cover” EU export restrictions, “provided we don’t go on with the measure beyond what’s absolutely necessary,” said Hosuk Lee-Makiyama, director of the European Centre for International Political Economy. “This is not an action we seek justification before the WTO, but before our own conscience.“

For now, the Commission said the new mechanism will apply only through the end of March, which would bolster the EU's defense in any WTO dispute. Officials said the mechanism could always be extended if necessary.

The second EU official said the overarching goal was simply to make sure EU countries get the vaccine, in accordance with the signed purchase agreements. "If our doses are delivered," the official said, "there will be no further issues about the exports."