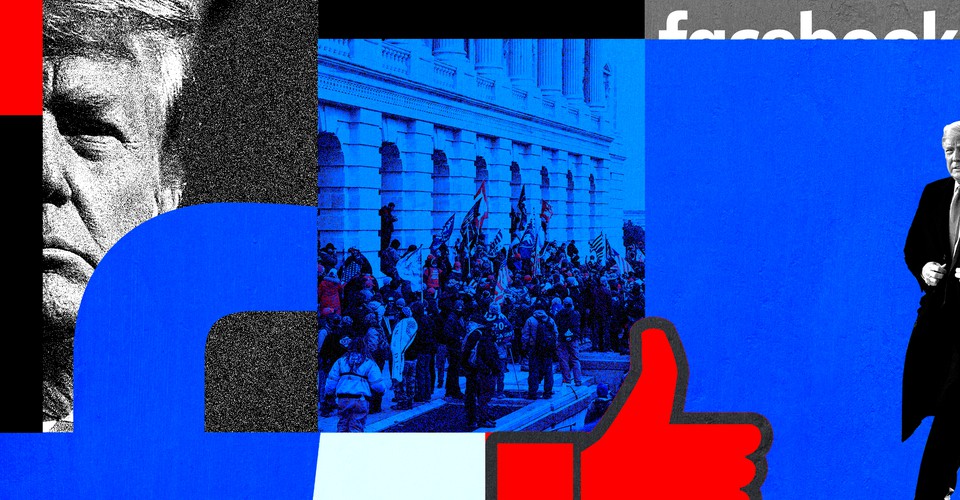 And Trump is allowed back on the platform in 2023.
Facebook has responded to last month’s much-hyped decision regarding the platform’s removal of Donald Trump. The former president will not be allowed to return, the company said, until January 7, 2023—two years from the date of his original suspension. This is arguably a very long time, as well as arguably no time at all. It feels more like the latter if you consider when the 2024 presidential hopefuls are likely to be announcing their candidacies.

But that’s not the day’s only Facebook news. The company also published a 20-page PDF addressing the 19 recommendations that it gleaned from the decision of its oversight board—a “Supreme Court” of sorts that it funded through a $130 million trust—in the case of Trump’s suspension. Fifteen of these will be implemented “fully.” These include establishing clearer policies regarding accounts held by world leaders, and greater transparency regarding what kind of content can be exempted from certain moderation rules because of “newsworthiness.” One recommendation was discarded, and Facebook said two still need to be assessed for feasibility. The only recommendation that will be implemented “in part” is No. 14: that “Facebook should review its potential role in the election fraud narrative that sparked violence in the United States on January 6, 2021 and report on its findings.”

In response, the company suggests that the insurrection was not its fault: “The responsibility for January 6, 2021 lies with the insurrectionists and those who encouraged them, whose words and actions have no place on Facebook.” It notes the appropriateness of examining the facts of the insurrection as it considers “whether and how we adjust our policies to combat misinformation and hate,” but says that examination shouldn’t be Facebook’s job: “We believe that independent researchers and our democratically elected officials are best positioned to complete an objective review of these events.” To this end, Facebook will continue a research partnership with outside academics to “look specifically at the role Facebook and Instagram played in the 2020 US election.” It will also continue to cooperate with law enforcement’s investigation of the people who stormed the Capitol.

“It’s astounding,” says Joan Donovan, the director of the Technology and Social Change Research Project at Harvard Kennedy School. “It’s such an abuse of power at this stage.” She noted that inviting outside researchers to figure out what happened at Facebook means that universities and nonprofits will have to spend millions of dollars to do what Facebook could easily do itself. (As for our democratically elected officials: They don’t seem too keen to do this work either.) Because so much of the data involved have been deleted, many researchers will also be stuck trying “to reconstruct a crime scene in which Facebook has most of the evidence and is unwilling to share.”

As shown by leaked documents obtained by BuzzFeed News and published in April, an internal task force at Facebook has already concluded that the company failed to take appropriate action to limit the organizing capabilities of “Stop the Steal” groups, and should “do better next time.” (Facebook told BuzzFeed that the report it obtained was not “definitive,” and was the product of just one team among many that deal with content moderation.) But as the company made clear today, it won’t be discussing that in public. “We know from BuzzFeed’s reporting that Facebook has been doing a similar investigation internally,” says Evelyn Douek, an affiliate at Harvard’s Berkman Klein Center for Internet and Society. “Its failure to commit to making the report open and public is extremely disappointing.”

None of this is really surprising when you consider that Facebook refused to answer the oversight board’s initial questions about “how Facebook’s news feed and other features impacted the visibility of Mr. Trump’s content,” and “whether Facebook has researched, or plans to research, those design decisions in relation to the events of January 6, 2021.” (According to the board’s May 5 case decision, the company took a pass on seven questions entirely, and two partially, out of 46.) Facebook’s chief operating officer, Sheryl Sandberg, also distanced the company from responsibility in an interview with Reuters just five days after the Capitol riot, saying, “I think these events were largely organized on platforms that don’t have our abilities to stop hate and don’t have our standards and don’t have our transparency.”

Although it’s true that other platforms hosted discussion among the organizers of the insurrection, we have only Facebook’s word that the “Stop the Steal” groups and event pages that proliferated on its site played a lesser role. Yet Mark Zuckerberg’s own justification for suspending Trump’s account, posted January 7, stated quite plainly that the platform had been used “to incite violent insurrection against a democratically elected government.” Facebook did not return a request for comment about the discrepancy between this sentiment and the argument presented in today’s announcement.
#Mark Zuckerberg  #Donald Trump  #Facebook
Add Comment