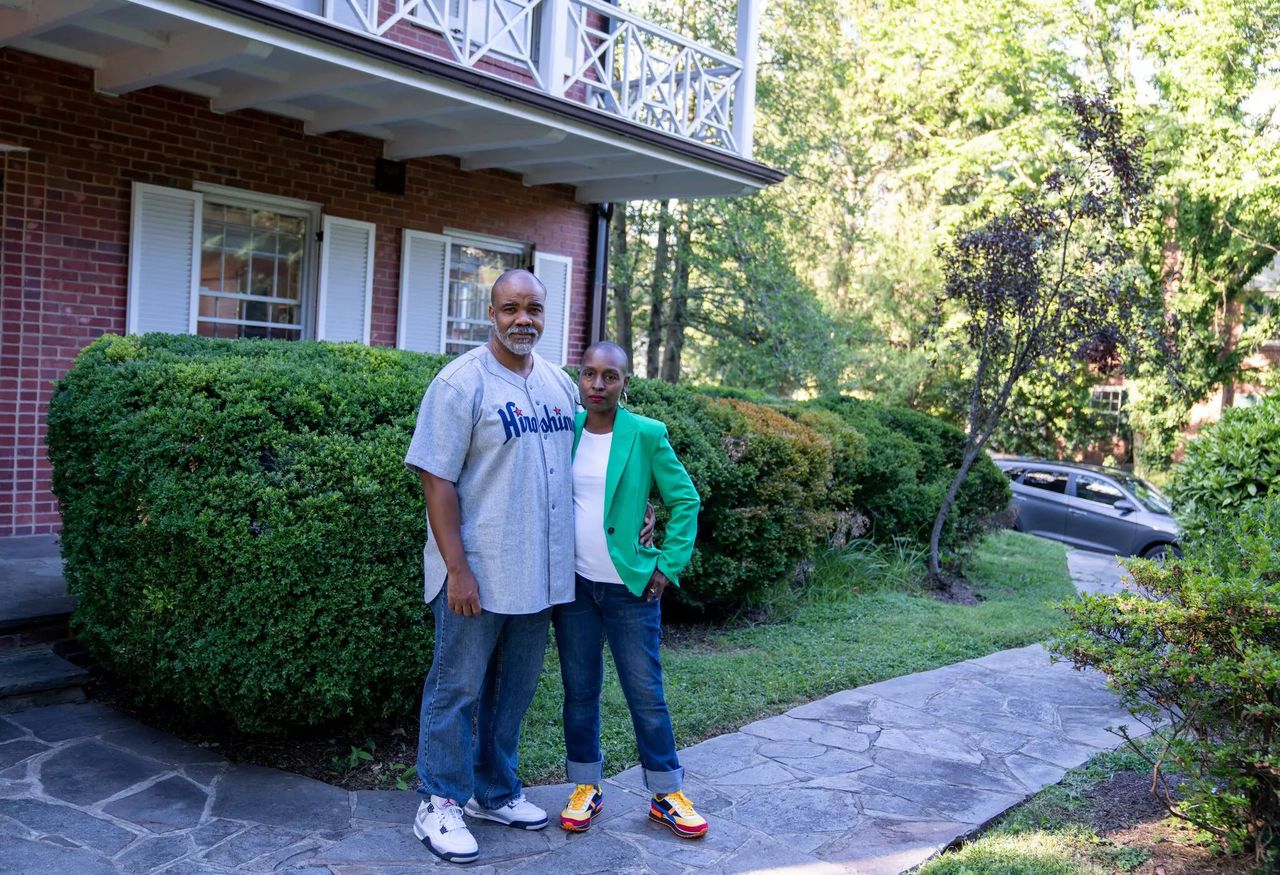 Nathan Connolly and Shani Mott are suing an appraiser and a mortgage lender after their Baltimore home was estimated to be worth $472,000. After the couple removed any indications that Black people lived there, a second appraiser valued the home at $750,000
Last summer, Nathan Connolly and his wife, Shani Mott, welcomed an appraiser into their house in Baltimore, hoping to take advantage of historically low interest rates and refinance their mortgage.

They believed that their house — improved with a new $5,000 tankless water heater and $35,000 in other renovations — was worth much more than the $450,000 that they paid for it in 2017. Home prices have been on the rise nationwide since the pandemic; in Baltimore, they have gone up 42 percent in the past five years, according to Zillow.com.

But 20/20 Valuations, a Maryland appraisal company, put the home’s value at $472,000, and in turn, loanDepot, a mortgage lender, denied the couple a refinance loan.

Dr. Connolly said he knew why: He, his wife and three children, aged 15, 12 and 9, are Black. A professor of history at Johns Hopkins University, Dr. Connolly is an expert on redlining and the legacy of white supremacy in American cities, and much of his research focuses on the role of race in the housing market.
Months after that first appraisal, the couple applied for another refinance loan, removed family photos and had a white male colleague — another Johns Hopkins professor — stand in for them. The second appraiser valued the house at $750,000.

This week, Dr. Connolly and Dr. Mott sued loanDepot, which is based in Foothill Ranch, Calif., as well as 20/20 Valuations and Shane Lanham, the owner of 20/20 Valuations. Mr. Lanham is the appraiser who conducted the first appraisal.

“We were clearly aware of appraisal discrimination,” said Dr. Connolly, 44. “But to be told in so many words that our presence and the life we’ve built in our home brings the property value down? It’s an absolute gut punch.”

The home appraisal industry, which relies partly on subjective opinions to translate home values into dollars and cents, has faced a firestorm of criticism over the past two years.

More than 97 percent of home appraisers are white, according to the Bureau of Labor Statistics, and since the summer of 2020, when conversations on race and discrimination in America rose to the forefront following the murder of George Floyd, dozens of Black homeowners have alleged discrimination in the home valuations they received. Some have filed lawsuits, and the Biden administration in March announced a set of planned reforms to overhaul the appraisal industry and dismantle systemic bias.
Dr. Connolly and Dr. Mott live in the North Baltimore neighborhood of Homeland, known for its strong public schools and colonial architecture, which has earned it a place on the National Register of Historic Places. A majority of their neighbors are white. According to their complaint, which was filed in Maryland District Court on Monday, the couple applied to refinance their mortgage with loanDepot in May 2021. The lender approved a loan at a rate of 2.25 percent and, according to the complaint, told the couple that their home was likely now worth $550,000 or more.

To conduct the appraisal, loanDepot hired 20/20 Valuations as a subcontractor.

Mr. Lanham conducted the inspection himself on June 14, 2021. According to the complaint, Dr. Connolly, Dr. Mott and their three children were home during the visit, and their house was also filled with family photos, children’s drawings of figures with dark skin, a poster for the film “Black Panther” and literature by Black authors (Dr. Mott lectures on literature and Africana studies).

“It would have been obvious to anyone visiting that the home belonged to a Black family,” the complaint reads. The appraisal came back just $22,000 more than they had paid, and loanDepot based its rejection of the couple’s application on the low number.

The couple criticized the way Mr. Lanham came up with his appraisal. Home appraisers frequently rely upon the sales comparison approach, in which they weigh real estate against the sale prices of similar nearby homes to determine value.

The first home used, the complaint argues, would be considered a “fixer-upper,” which the home of Dr. Connolly and Dr. Mott is not.

The second is outside the boundaries of the Homeland neighborhood, amid a majority-Black census block of homes.
In the third, he deducted $50,000 from the comparison amount because Dr. Connolly and Dr. Mott’s home faces a busy street — a deduction, the complaint says, that “is excessive and is inconsistent with proper appraisal practices.” Another $20,000 was deducted for the quality of construction.

All of the selected comparable homes, the complaint says, were of lower quality than Dr. Connolly and Dr. Mott’s home, and the appraisal incorrectly stated that their home had not received any updates for 15 years.

According to the complaint, Mr. Lanham “cherry-picked low value homes as comps,” and by doing so, he “ignored legitimately comparable homes with much higher sales prices.”

When reached by phone on Tuesday, Mr. Lanham declined to comment.

Dr. Connolly and Dr. Mott wrote a letter to Christian Jorgensen, a lending officer at loanDepot who had been their main point of contact up to that point, challenging the appraisal. According to the complaint, the loan officer then stopped responding to their calls.

Mr. Jorgensen did not respond to requests for comment.

Several months later, the couple applied for a new loan with Swift Home Loans, which partnered with Rocket Mortgage. This time they underwent a “whitewashing experiment,” removing indications of Blackness from their home and replacing them with signifiers that a white family might live there instead. They cleared their bookshelves of works by Black authors. They asked white friends to share family photos and placed those in picture frames around the house; on their walls, they hung art bought at Ikea that showed white people.

An American flag that was presented to Dr. Mott 10 years ago after the death of her father, a Vietnam War veteran, was removed from storage, framed and placed on the mantel.

“We had to have a conversation with our kids about why we’re pulling down all their drawings,” Dr. Connolly said. “It’s very humiliating to strip yourself of your own home.”
On the day of the second appraisal, they left their home and had the white colleague answer the door. The second appraiser provided the $750,000 estimate.

The homes pulled by the second appraiser were of significantly higher value than those selected by Mr. Lanham, selling from $749,000 to $785,000. And while Lanham docked $50,000, or 10 percent, from the comparable homes that were not on a busy road, the second appraiser deducted $15,000, or 2 percent. The complaint says that the 2 percent adjustment is consistent with industry standards.

Race has long played a role in housing policy in the United States, and Black Americans are denied mortgages at disproportionate rates. The impact of redlining, a racist Depression-era housing policy, continues to drive down home values in Black neighborhoods and deprive resources for communities of color.

But Dr. Mott and Dr. Connolly do not live in a Black neighborhood. The disparity in their two appraisals echoes a lawsuit brought by Tenisha Tate-Austin and Paul Austin, a Black couple in California’s Bay Area who have accused an appraiser of lowballing their home’s value by $500,000. That case, said Mr. Austin, is scheduled for mediation — a chance to resolve the matter before heading to court — in September.

The Department of Justice made the unusual move in February of issuing a statement of interest in the Austin case, underscoring the fact that appraisers, who are bound by the Fair Housing Act of 1968 to not discriminate, can be held legally liable if they do.

Mr. Austin said it was a big step for President Biden and Vice President Kamala Harris to say that they want the appraisal industry to be overhauled. “But I do believe it is going to take quite a few more lawsuits in order for appraisers to stop devaluing Black and brown properties,” he said. “It’s a historical aspect of how people value Black and brown lives.”

The Justice Department’s move in the Austin case came several months after Mr. Biden announced the creation of the Interagency Task Force on Property Appraisal and Valuation Equity, which aims to evaluate the causes of appraisal bias and execute an action plan to root it from the industry. The task force is led by Susan E. Rice, the White House domestic policy adviser, and Marcia L. Fudge, the secretary of housing and urban development. One year in, say senior HUD officials, they are working to bolster its governance over the Appraisal Foundation, which sets standards for appraisers.
Of course, it is not unheard-of for appraisals to be far off the mark — one study in 2012, for example, found a wide berth between what was said to be the values of homes and their eventual sale prices.

Nevertheless, discrimination on appraisals continues to trouble those who work in the industry. James Park, executive director of the Appraisal Subcommittee, the independent federal agency that monitors the Appraisal Foundation, said he is deeply disturbed by accusations of discriminatory appraisals that continue to come to light.

“It’s a concern, and it should be a concern for the entire appraisal industry, as well as mortgage lenders,” Mr. Park said.

John Relman, managing partner of Relman Colfax, the law firm representing Dr. Connolly and Dr. Mott, said: “Appraisal discrimination is insidious because it’s so nuanced. But what’s unique about this case is it’s not a typical redlining case. You can’t get more accomplished than these two individuals. They have done everything the market told them to do, and they invested in a community where everyone else had the benefit of rising real estate values. And yet they were still discriminated against.”
Add Comment