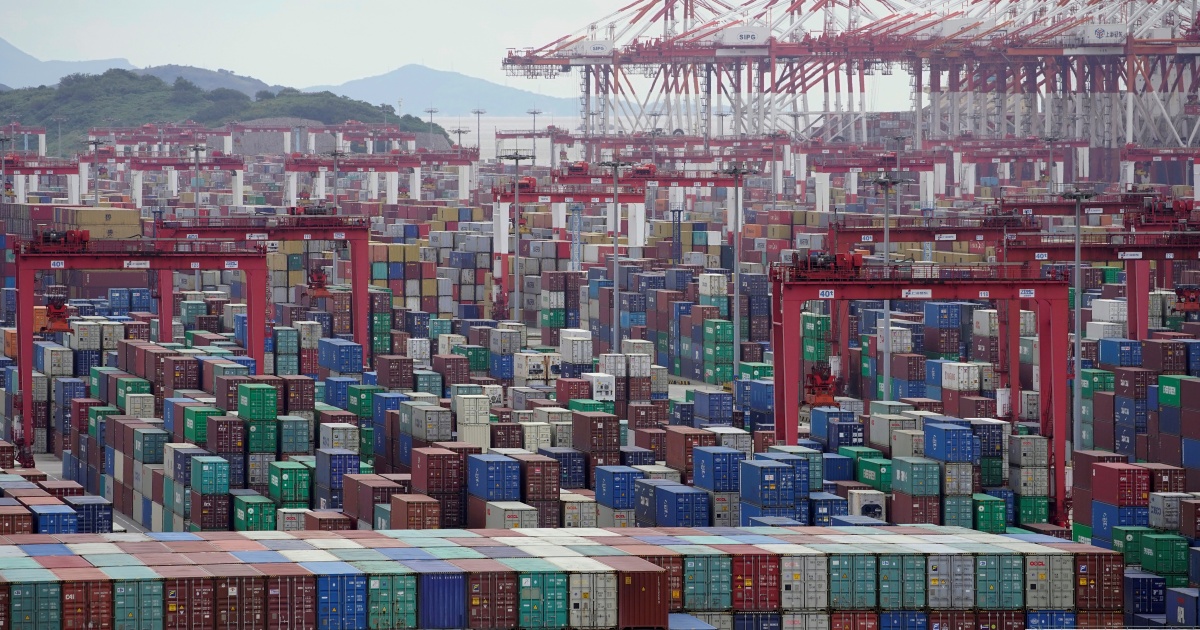 Is a global recession coming? In US, China risks are mounting

Ukraine war and China’s lockdowns among risks to global growth, although most economists say downturn unlikely in 2022.

Could the world be headed for another recession?

Just as the global economy is bouncing back from the COVID-19 pandemic, a growing list of risks is clouding the economic outlook – although most economists still believe a recession this year is relatively unlikely.

The war in Ukraine, Russia sanctions, China’s “zero COVID” policies, spiking inflation, and interest hikes by the United States Federal Reserve are all set to crimp growth in 2022.

The question is whether deteriorating conditions and ill-judged policy choices could tip the global economy from a slowdown into a contraction.

“Recessions are incredibly hard to predict, and even good forecasters, e.g. the Fed, only know we’re experiencing a recession once we’re in one, not in advance,” Tara Sinclair, an economics professor at the George Washington University in Washington, DC, told Al Jazeera.

“In general policymakers underweight recessions in their forecasts and focus on predicting the economy in normal times.” 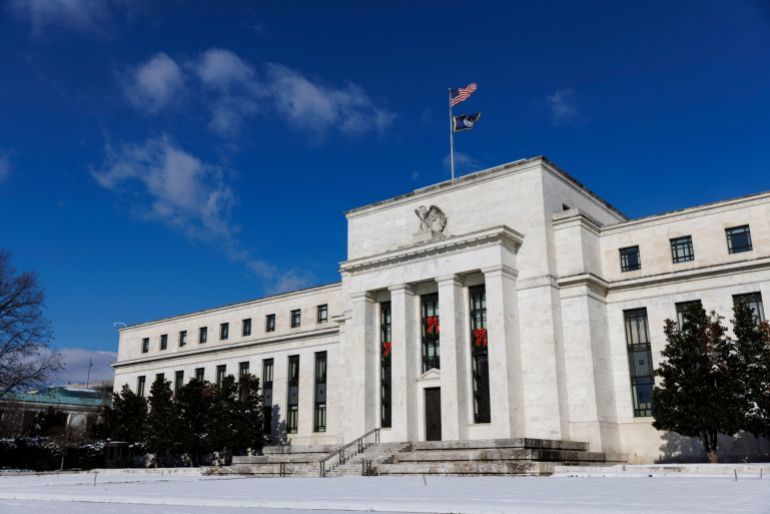 In the US, the Federal Reserve faces the delicate task of cooling inflation, which is at a four-decade high, without raising rates so sharply that it brings on a recession. Historically, the central bank has struggled to pull off such “soft landings” – most economists argue it has only done so once, in 1994, when then-chair Alan Greenspan oversaw a doubling of the benchmark rate without killing economic growth.

A downturn in the world’s largest economy, which recorded its fastest expansion in decades last year, would reverberate globally, threatening to send growth into reverse barely two years after the world economy shrank 4.3 percent due to the pandemic.

US Fed Chair Jerome Powell, who is expected to oversee at least six more rate increases this year after a quarter percentage point hike last month, has insisted the central bank can “more likely than not” achieve a soft landing.

Another warning sign in recent weeks has been an inverting of the curve plotting yields on short and long-term US Treasury bonds – an indication that investors are becoming pessimistic about the economy’s near-term prospects.

An inverted yield curve, which occurs when investors turn away from stocks towards less risky bonds, has preceded all eight US recessions since 1955, although the time frames between an inversion and a downturn have varied between months and years.

Campbell R Harvey, who pioneered the use of the yield curve to predict recessions, told Al Jazeera the curve does not currently point to a contraction as it has not been inverted for at least one full quarter.

Still, Harvey said there is a real risk of a recession and he agrees with critics who say the Fed has been too slow to act on inflation.

“They have got a hard, hard problem,” said Harvey, a professor at Duke University’s Fuqua School of Business. “And have they left it too late? Yes. Are they regretting all the QE [quantitative easing] that they did? Yes.”

“Is it a real risk? Obviously it is.”

For now, economists appear more sanguine about the US economy than the general public.

In a poll carried out on behalf of CNBC last month, 81 percent of US adults said they believe a recession is likely in 2022.

By contrast, Goldman Sachs economists recently put the odds of a US recession in the next year at 20-35 percent.

“Biden’s infrastructure stimulus will kick in,” Tim Harcourt, chief economist at the Institute for Public Policy and Governance at the University of Technology Sydney, told Al Jazeera. “It may not save the Democrats in the midterms but it might save the economy. China’s economy will be hit by the new Shanghai shutdown.”

Although economies have weathered the war in Ukraine and sanctions against Russia relatively well so far, the possibility of escalation and more punitive measures remain as risk factors in the coming months.

While Europe has resisted sanctions on Russian energy, so far only focusing on coal, there are growing calls to extend the restrictions to gas and oil, which account for 40 percent and one-third of the continent’s supplies, respectively. 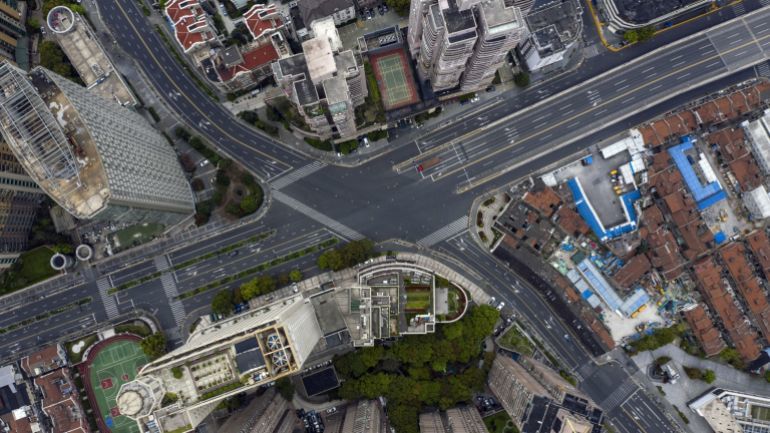 China’s continuing efforts to eliminate the spread of COVID-19 with ultra-strict lockdowns and border controls, meanwhile, are dampening domestic consumption and aggravating disruptions to global trade amid the country’s worst outbreak yet.

In Shanghai, which contains the world’s busiest container port and has been in lockdown for more than two weeks, hundreds of ships looking to unload their cargo have been held up in queues in recent weeks.

Carsten Holz, an expert on the Chinese economy at the Hong Kong University of Science and Technology, told Al Jazeera China is unlikely to meet its growth target of 5.5 percent for this year.

“Given that the People’s Republic of China is currently unlikely to easily return to a zero COVID case scenario, supply chains will continue to be affected, leading to price increases, which in turn will contribute to the pressure on Western central banks to raise interest rates,” Holz told Al Jazeera.

“Whether interest rate raises in the West lead to a recession largely depends on demand, which would appear to continue to be strong, not least due to pent-up demand following the now lifted COVID restrictions in the West. A wage-price spiral would appear more likely than a recession. That is not to say that a bubble may not burst, whether that is a stock market bubble or a real estate bubble, a risk that is ever present since what constitutes a bubble can only be determined in hindsight, after a sharp drop in values has occurred.”

In its latest economic outlook released on Wednesday, the Asian Development Bank estimated Asia’s developing economies would grow 5.2 percent in 2022 and 5.3 percent in 2023, only slightly down from earlier forecasts.

Trinh Nguyen, a senior economist for Asia at Natixis in Hong Kong, told Al Jazeera a global recession is still “unlikely” in 2022.

“The good news for Asia is that we have rather low real rates and normalisation of activities, except for China with the zero COVID policy,” Nguyen said. “That should help us weather the economic storm. Still, higher commodity prices, tighter financial conditions due to the rise of the USD and rates, and the China slowdown are dampening momentum, especially for countries most exposed.”