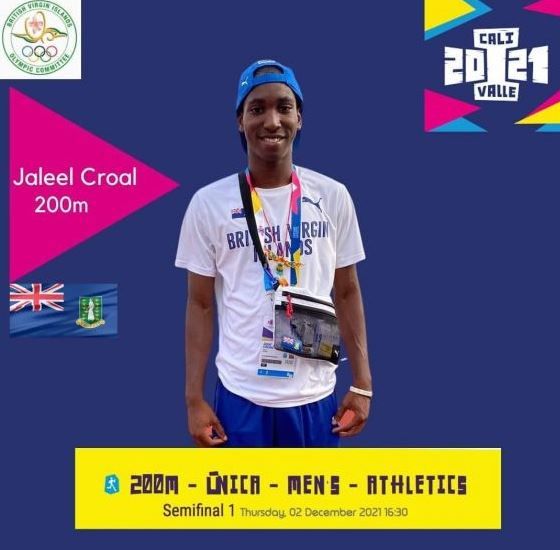 Virgin Islands youth sprinter Jaleel N. Croal placed 3rd in his heat of the 200m semi-finals at the Cali 2021 inaugural Junior PanAm Games. His time of 21.24 secured a spot in the finals where he will run in lane 8 at 7:00pm today, Friday, December 3, 2021.

18-years old Jaleel came out of the race feeling positive about his time and performance. “Before the race I was nervous but I said to myself that the hard part is qualifying and the fun part is the finals. Once on the track I felt better and I felt good coming out of the blocks and overall felt the race was good. I am very happy about it and will be ready to give it my 100% in the finals.”

Coach Ralston Henry aka 'Grandfather' also was happy with the race and performance saying, “It was a very good time with which to open the season at this time of the year. He ended the season with 21.10 so coming back with a 21.24 to start the season was very good. I’m looking forward to what we will see in the finals.”

Thad A. Lettsome sails according to plan

Thad A. Lettsome closed out his first day of racing the ILCA7 laser with a 5th and 4th place finish out of a fleet of 14 which, according to Coach Chris Watters, is exactly where they planned to be. “Thad did a really good job starting, sailing smart and conservatively. We want to be in the middle of the hunt all the way through the end so we’re hoping for similar conditions tomorrow,” said Coach Watters.

“The first day of the regatta went well,” said Thad. “We’re looking to maintain a consistent score line and then perhaps look at being more aggressive and making a push after the first race as that would mark the half way point of the event.” 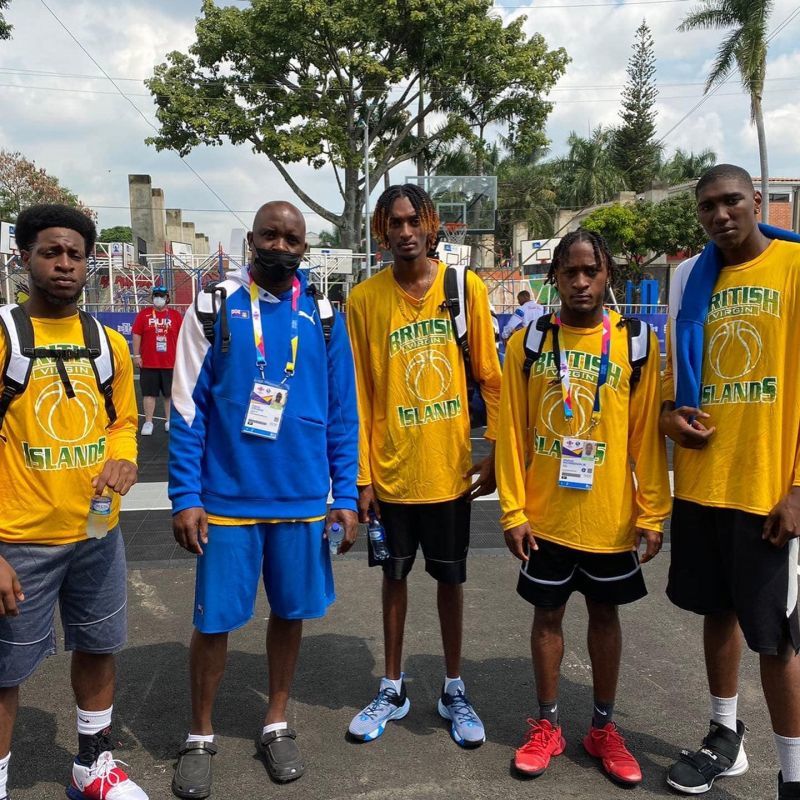 The BVI 3x3 basketball team competed in their first two matches of their first international Game where they lost out to Puerto Rico 5-21 in a shake up match. The 2nd match against Colombia went better for the team as they held the lead for the first part before finally conceding the game by 6 points for a 9-15 score. The team comprising Michael Richardson, Shakeem Tyson, Stephano Paul, D’Andre Mitchum and Coach Trevor Stevens aka 'West' will face Venezuela at 11:30am VI time on Friday, December 3, 2021.

“Today has been a very positive day for Team BVI at the Junior PanAm Games,” said Chef de Mission Adam Murrills. “The day started with a very tough game for our basketball team against one of the favourites. They really showed a strong mentality in bouncing back in their 2nd match against home country Colombia. They still have a chance of qualifying and so there is everything still to play for. After speaking with the boys they are up for the challenge and are looking forward to getting stuck in!

“Thad had a great day out on the water executing objectives which put him in 4th place ready to mount a challenge for a medal while Jaleel did the business in the 200m semi-final and everyone is looking forward to cheering him on in his final where he’ll be going in with no pressure!”

BVI Olympic President Ephraim E. Penn has been in Colombia since November 21, 2021, where he attended the meetings as a member of the Technical Commission as well as attending the Panam Sports AGM and the Extraordinary General Assembly of Centro Caribe Sports along with Secretary General Lloyd K. Black.

“So far the Cali 2021 Junior PanAm Games have been very busy both from a technical perspective and from the angle of our athletes, coaches and physio, Levi James” said President Penn.

"This is a new experience for all but one of our juniors - that being Thad Lettsome who competed in his first major Games at the Lima 2019 PanAm Games. I am impressed with how the athletes have adapted to the demands and expectations of international competition guided by their coaches. They are excited, yet disciplined and focused and are great ambassadors for the Virgin Islands.

"As Chef de Mission, Adam Murrills is doing an excellent job of making sure that our athletes are well looked after and that the delegation is kept up to date and informed of all schedules and requirements as may be announced by the organisers. As the BVI Olympic Committee, we couldn’t be prouder of our team and we look forward to the action over the next couple of days.”

The live action can be seen on Panam Sports Channel, CBNTelevision.com and CBN Channel 101. Full scores for competing nations can be found on calivalle2021.com.