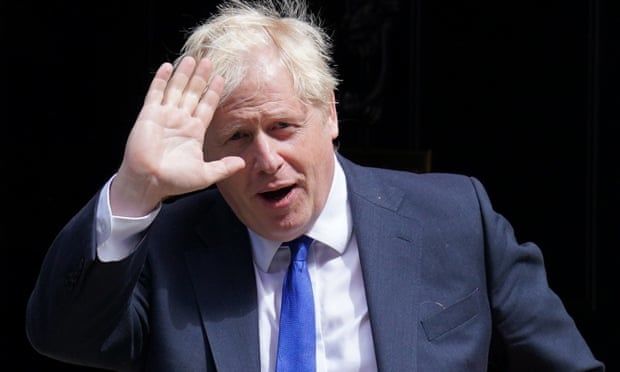 Johnson clings on amid cabinet standoff and dozens of resignations

Boris Johnson was locked in an unprecedented standoff with his own cabinet on Wednesday, as he clung to power after an extraordinary day that saw more than 40 resignations, and the sacking of Michael Gove.

The prime minister appeared determined to fight on, despite a delegation of senior cabinet ministers, including the home secretary, Priti Patel, and the transport secretary, Grant Shapps, personally urging him to resign.

Instead of stepping down, Johnson responded by sacking Gove as levelling up secretary. Gove had earlier told the prime minister in a face-to-face meeting that he believed his position was unsustainable, given the number of MPs who had turned against him.

In the wake of Gove’s sacking, Johnson’s allies reportedly described him as a “snake”. They said the prime minister had no plans to step aside. A Downing Street source said: “He wants to stay and fight. The choice is a summer of navel-gazing and instability or a new partnership that finally moves forward and tackles the cost of living crisis and grows the economy.

“It’s not quite as Doomsday as people were thinking a few hours ago.”

They added: “He’s naturally just immovable in terms of his bullishness. He will say millions of people voted for me only two years ago – and I’m going to fight this to the end. I can’t just pack that in.”

The source also suggested Johnson believed he could press ahead with his preferred economic policies now that Rishi Sunak, who was sceptical about the need for tax cuts, had stepped aside.

But criticism has continued to mount. Backbencher Andrew Murrison, who resigned as a trade envoy on Tuesday, tweeted: “The situation is now getting out of hand. Absolute duty of remaining ministers in Mr Johnson’s rump government to quit. Nobody making the positive choice to remain should feature in the upcoming leadership contest.”

Bob Neill, chair of the justice select committee, replied: “You are right, Andrew. Our country is being made a laughing stock by one person’s obsessive selfishness.”

The Welsh secretary, Simon Hart, who was among those telling Johnson to go, later quit. He told the prime minister in his resignation letter: “Colleagues have done their utmost in private and public to help you turn the ship around, but it is with sadness that I feel we have passed the point where this is possible.”

The attorney general, Suella Braverman, said it was “time for the prime minister to resign” on Wednesday night. She also said she would be a candidate in the forthcoming leadership election – but would not be immediately resigning. “I don’t want to resign because I have that duty and we need an attorney in government.”

Shapps, who did the number crunching for Johnson’s leadership bid, is understood to have told the prime minister there was no way he could win a second confidence vote.

He told the prime minister he must make a more dignified exit than that, and should set his own timetable for his departure. Johnson disagreed.

Another cabinet minister among the group confirmed that Johnson had told them he had no intention of stepping down, despite his support plummeting throughout the day.

Johnson’s new chancellor, Nadhim Zahawi, was also one of the delegation of cabinet ministers who went to see him. It is understood he did not urge him to step down, but stressed the challenge of governing, given how many frontbenchers have resigned.

Sajid Javid, who quit as health secretary on Tuesday night, used his resignation speech in the Commons to urge others to follow suit, saying: “Enough is enough”.

His statement came after prime minister’s questions, which saw Johnson adopt a defiant tone, despite the slew of resignations throughout the day.

At one point in the early afternoon, five ministers, including Tory rising star Kemi Badenoch and levelling up minister, Neil O’Brien, resigned all at once.

“It has become increasingly clear that the government cannot function given the issues that have come to light and the way in which they have been handled. In good faith, we must ask that, for the good of the party and the country, you step aside,” they said.

In a sign of the sheer scale of ministerial loss, Gove’s dismissal meant that of the five MPs who at the start of the day were ministers in the communities and levelling up department – billed as leading the defining mission of Johnson’s government – just one was left by 9.30pm, housing minister Eddie Hughes.
Earlier, children and families minister Will Quince resigned, complaining about the way he had been sent

out to defend the government’s handling of the sex scandal around deputy chief whip Chris Pincher which triggered the current crisis. “Thank you for meeting with me yesterday evening and for your sincere apology regarding the briefings I received from No 10 ahead of Monday’s media round, which we now know to be inaccurate,” he said in his resignation letter.

Even in a day of unexpected events, one of the more curious elements came when Johnson appeared as scheduled before the liaison committee of senior MPs, a session which began with him answering detailed questions on areas including Ukraine and defence policy.

Once quizzed on his future, Johnson insisted there was “a wealth of talent” to fill ministerial vacancies, and appeared to hint he might try to call a snap election if the cabinet try to oust him. “History teaches us that the best way to avoid pointless political disturbance is to allow the government that has a mandate to get on and deliver its mandate,” he argued.

Meanwhile a string of backbenchers, many of whom had previously been staunch supporters of the prime minister, made it clear they could no longer back him.

Ashfield MP Lee Anderson said: “I cannot look myself in the mirror and accept this.”

The powerful backbench 1922 Committee has opened nominations for a poll next Monday that could pave the way for a rule change allowing a second vote of no confidence in Johnson as soon as next week.

During prime minister’s questions alone, three of Johnson’s MPs called for him to go. Birmingham MP Gary Sambrook accused the prime minister of playing down Chris Pincher’s behaviour, by telling MPs in the Commons tearoom on Tuesday that his victim was drunk.

Labour leader Keir Starmer attacked Johnson for protecting Pincher on Wednesday. He called Johnson’s remaining cabinet members “the charge of the lightweight brigade” as he attacked him for appointing Pincher as deputy chief whip, despite knowing that he had behaved inappropriately to a junior colleague when a Foreign Office minister in 2019.

Johnson apologised for appointing Pincher, saying he regretted it, but went on to wrongly claim that he had immediately removed the whip when he heard about Pincher’s behaviour – when in fact it took him a day to do so.

As Johnson continued to cling on, government insiders raised questions about the advice he is receiving – including from strategist Lynton Crosby.

“What is Lynton doing? He has put all his own people in key roles and yet the advice the PM has had overall last week is terrible,” the source said, adding that it was “staggering,” he had been told to go ahead with the liaison committee appearance.

A former Tory cabinet minister warned that if Johnson clings on, a series of other crises – not least the fresh allegations against Pincher, who remains a party member, are likely to drag him down in the coming months. “Boris has now got such a pipeline of shit arriving that even if he did nothing for six months, we’d still have trouble coming.”

Sam Freedman, a former adviser to Gove, told the BBC it was sad to see Johnson trying to cling on, and called him “delusional.”