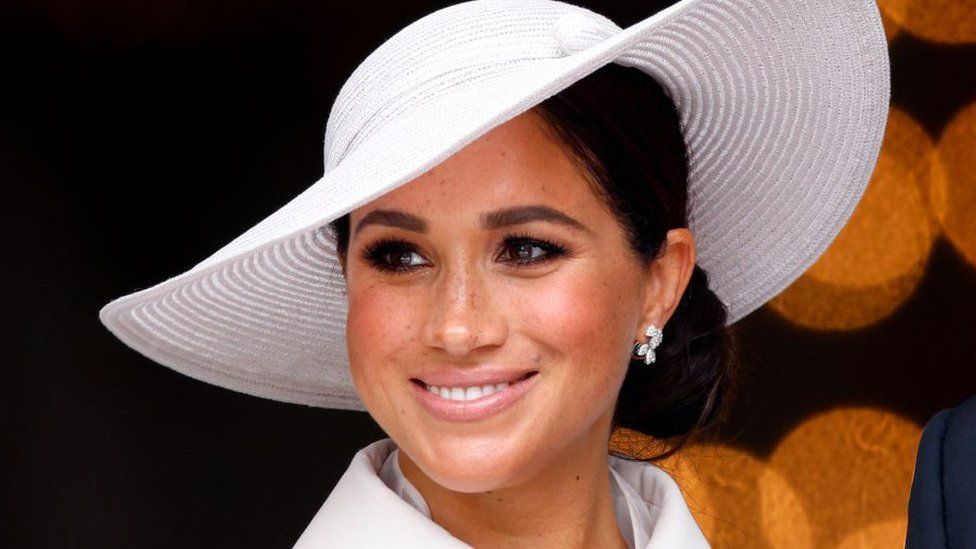 The Duchess of Sussex says she upset the "dynamic of the hierarchy" of the Royal Family "just by existing".

In an interview with US magazine The Cut, Meghan, 41, talks about her life when she was a royal and why she and the Duke of Sussex moved to the US.

Talking about her exit from the Royal Family the duchess said it "takes a lot of effort to forgive".

She also spoke about Prince Harry's relationship with his father, the Prince of Wales.

Asked by journalist Alison P Davis about the impact of her privacy case against the Mail on Sunday, Meghan said: "Harry said to me, 'I lost my dad in this process.'

"It doesn't have to be the same for them as it was for me, but that's his decision."

A spokeswoman for the duchess later told BBC News that Meghan was referring to her own father, from whom she is estranged, and was saying she hoped the same would not happen to her husband.

A source close to Prince Charles told the PA news agency he would be saddened if Prince Harry felt their relationship was lost, adding: "The Prince of Wales loves both his sons".

The 37-year-old prince has previously said his father "stopped taking my calls" after the couple stepped back as senior working royals in 2020.

Under the arrangement, the couple gave up their Royal Highness titles, and became able to work to become financially independent. Harry retained the title of prince through birth.

Prior to this, the Sussexes reportedly set out a vision for continuing to be working royals in the Commonwealth and to earn their own money, in the hope this would reduce "the noise" about them.

Meghan told The Cut: "That, for whatever reason, is not something that we were allowed to do, even though several other members of the family do that exact thing."

After announcing they would step back from royal duties, Prince Harry and Meghan initially moved to Canada in January 2020.

But, after Canada said it would stop providing security for the family, the family moved to California, where they lived in a home provided by media mogul Tyler Perry before buying their own property in Montecito.

Meghan is media dynamite, so a fairly gentle interview, with some open-to-interpretation comments, has blasted its way on to the front pages.

For her fans, it was another slice of the unfair, crabby-minded pressures of royal life that forced Meghan and Harry to move to California.

For her critics, it was more deluded self-promotion, seizing on quotes such as Meghan being told that her marriage to Harry was greeted in South Africa with rejoicing the same as "when Mandela was freed from prison".

The article describes them living in the "home equivalent of billionaires dressing down in denim" and their complaints might grate with families worried sick about paying energy bills.

But the interview raised some of the contradictions facing Harry and Meghan.

They wanted to get away from the suffocation of royal life, but their royal links are their most bankable assets.

It's like old rockers not wanting to talk about their early records, when that's the only reason people are interested.

They also wanted to escape media intrusion and they have in effect become part of the media, with deals with Spotify and Netflix.

Davis, a features writer who has previously interviewed celebrities such as Jada Pinkett Smith and Lena Dunham, asked Meghan if she thought there was room for forgiveness between her and her royal in-laws and her own family.

The duchess responded: "I think forgiveness is really important. It takes a lot more energy to not forgive.

"But it takes a lot of effort to forgive. I've really made an active effort, especially knowing that I can say anything."

*  spoke of her fears that staying in the UK may have exposed her son, Archie, three, to excessive media attention


*  said Archie is taught the importance of manners, with the phrase "manners make the man" often repeated


*  told how the couple initially resisted viewing their $14.65m (£12.48m) California home as they did not think they could afford it


*  divulged that she packed up their belongings at Frogmore Cottage, Windsor, while visiting for the Queen's Platinum Jubilee

The Cut interview was part of a promotion effort for the duchess's Spotify podcast, Archetypes, which launched last week.

The series promises to "investigate, dissect and subvert the labels that try to hold women back", with tennis legend Serena Williams discussing ambition on the first episode, while pop star Mariah Carey features in the second instalment, released on Tuesday.

In Carey's episode the duchess says there was more focus on her race once she started dating her husband.

"Then I started to understand what it was like to be treated like a black woman, because up until then I had been treated like a mixed woman and things really shifted," she said.

The Sussexes, who also have a one-year-old daughter, Lilibet, have signed deals with Spotify and Netflix since leaving the UK.

Prince Harry told Davis he did not believe some members of the Royal Family could live and work together as closely as he and his wife do.

The article described the Sussexes running their company Archewell while sitting at a single desk in a shared home office.

"Most people that I know and many of my family, they aren't able to work and live together," Prince Harry said.

"It's actually really weird because it'd seem like a lot of pressure. But it just feels natural and normal."

Both Harry and Meghan have had legal battles with parts of the British media and the duchess told Davis she would not have been able to pick Archie up from school in the UK "without it being a royal photo call with a press pen of 40 people snapping pictures".

"Sorry, I have a problem with that. That doesn't make me obsessed with privacy. That makes me a strong and good parent protecting my child," she said.

Several royal correspondents have taken to social media to say this would not be the case. 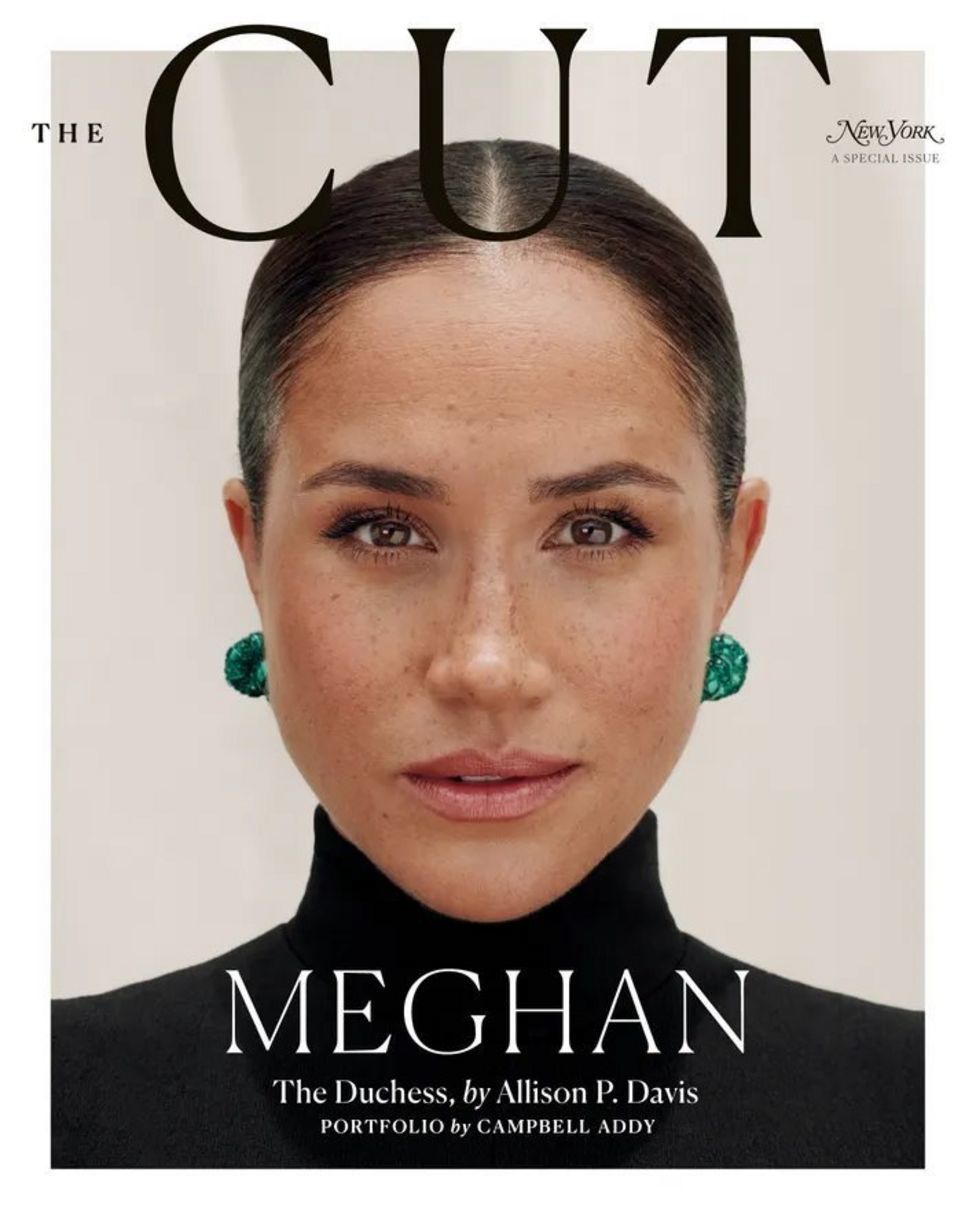 The 6,450-word interview appears in US magazine The Cut, part of New York magazine

During the interview Davis talks about accompanying Meghan to collect Archie from pre-school, with the three-year-old wanting to roll down the car window as they pass a favourite bush, while munching on a quesadilla.

There are other insights into the duke and duchess's lives in California in the course of the article, with the young family dancing around to Prince Harry's beatboxing - while Lilibet watches on from her nanny's arms - and Archie calling his parents "Momma" and "Papa".