There is a big difference between legitimate censorship of any incitement to violence, rebellion, racism or hatred, and between a policy of total and blind censorship, that forbids any person in general, and especially a sitting president in a democratic state, even from just greeting his 88 million followers with a ,Good Morning, or a Happy Holiday, or share his legitimate - or even stupid - thoughts about anything that is not prohibited by nature or laws.

There is no dispute that only a terrorists will support vandalizing government building, in the name of the freedom to protest.
wether it is in Washington, Hong Kong or London.

The freedom of speech, just as the freedom to protest, is not unlimited - as It has been well said, that “democracy should not commit suicide, just to prove that it is a democracy”.

But we shouldn't throw the baby out with the bathwater, by letting few crazy extremists to disconnect us from our core values, by pushing us to replace democracy with totalitarian censorship.

There is no doubt, that the Big Tech doing it out of great sense of social responsibility, to protect the public interest. But also The road to hell, is paved with good intentions.

In dictatorships of old, they simply eliminated the losers.

But in our enlightened modern times, you can easily kill millions, by simply turning their lights off.

You do not solve the “wrong thinking” of 74 million people by shutting them off.

This is not about Trump, it's about 49.9% of the voters, the 74 million citizens who have suddenly been disconnected from their First Amendment Right, to be exposed to the Free Speech of their current President.

It’s not about a soon-to-be departed President, but about the half of America that has suddenly and brutally been disconnected from Democracy.

Censorship is a dangerous way to deal with “wrong” opinions and “offensive” expressions.
If you push a cat to the wall he becomes a lion.
"You can kill a man but not an idea."

The nightmare of national security interest will be, to push the extremists out from the public monitoring zone, into the DarkNet. Let them talk so the authorities can easily crack them down. Or, as Justice Louis Brandeis well phrase it, “the sunlight, is the best disinfectant”.

The Big Tech should look above the short term gain of shutting down a controversial President. As an American entity and citizens, the Big Tech better consider the total damage such a censorship is doing to the democracy and free speech nation that USA is trying to build for itself and to promote all over the world.

Censoring a President it’s a doomsday weapon. Once it’s used, you loose your moral authority to criticize any other dictator that will disconnect his opposition from the internet, or jail journalists, or burn books.

Can the United States tell from now on to any other country that a total and blind censorship is wrong? What can we tell them now? Don’t do to your opposition what we don’t give a dam and doing even to our President? Can you tell them now not to do to all their people what you do to your 74 million citizens just because that they do not support you?

What American can tell now to any dictator about democracy or free speech? Who can now complain if any dictator will decide to block all his citizens from Facebook, Twitter, YouTube and Gmail? This is not only a reputation damage to the democratic brand USA is trying to promote, this will also be a catastrophic intelligence damage to the ability to spy on all the the other country so easy, deep and wide.

Instead of an absolute censorship, the Big Tech should simply allocate few dollars, out of their trillion, and to bring back Trump online under 24 7 dedicated moderators, deleting before it's published whatever is calling for violence. and warning the public on every post that they think is not true.

This puts Democracy back where it should be, above Trump. Because by taking such a draconian censorship against Trump, we are upgrading his status to become a victim, and making sure that Trump will be memorized in the history books as the modern Alfred Dreyfus of our times. Because censorship is always the beginning of the end of every democracy.

“Where they burn books, they will also ultimately burn people." wrote Heinrich Heine, just before 1939.

And social media is the book people read nowadays. And buy shutting people down, we in fact burning their book.

If the Big Tech had temporary blocked Trump’s account until the 20th January, just to avoid violence, I would still be against censorship, but I can understand the logic behind it.

In my view the Big Tech make enough billions, to allocate one full time employee, just to moderate every tweet and every post the President’s uploads, before it becomes public, and so ensure, there is no tweet goes out that is calling for violence.

Democracy should be bigger than Trump, not smaller.

It’s important for us as a society to protect Trumps freedom of any legitimate speech.
It is Not about to protect the President’s First Amendment Right of freedom of speech, but to protect the 300 million Americans, and especially his 74 million voters from being censored from what their CURRENT President has to tell them.

I do not say that all what Trump said is right or smart or proper. Not at all. But how can we justify the claim of being a democracy if we block a sitting President from ALL his communications with the public?
FOREVER?

Is it’s really the only choice we’ve left with, to join forces with the enemies and operate a massive witch-hunt against anybody who ever supported the person who is until this very moment the sitting president of the United States?


What would we say if they did this in the UK to Boris Johnson, or in Germany to Angela Merkel or in Canada to Justin Trudeau?

What do we say when they are doing exactly the same in North Korea, Iran and Belarus?

Sorry, but the hatred of Trump, and the height vertigo from winning the election is blinding our collective memory from how history is repeating itself against those who are unable to learn from it, with exactly the same sophisticated justifications. What started as a cool version of 1984, allowing Big Tech to “Move Fast and Break Things”, is now clearly moving us in,deja vu, fast back into the horrors of 1939.

We should never ban anybody from expressing their thoughts, as long as it doesn’t contain incitement to violence, rebellion, racism or hatred. We should be careful from blocking ourselves, from listening to other people, even if they stupidly said in the past something wrong.

Because as we all know, ‘Even a Broken Clock Is Right, Twice a Day'. 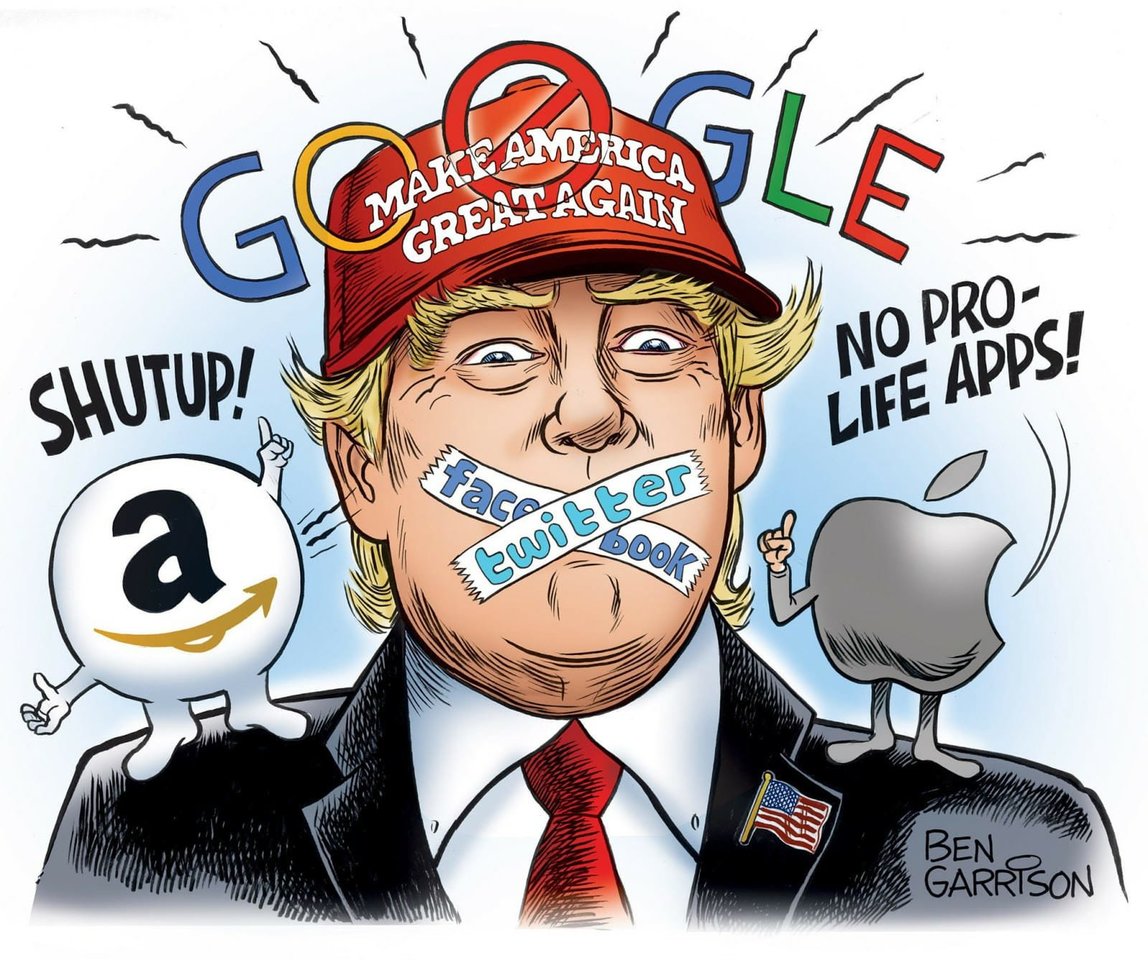