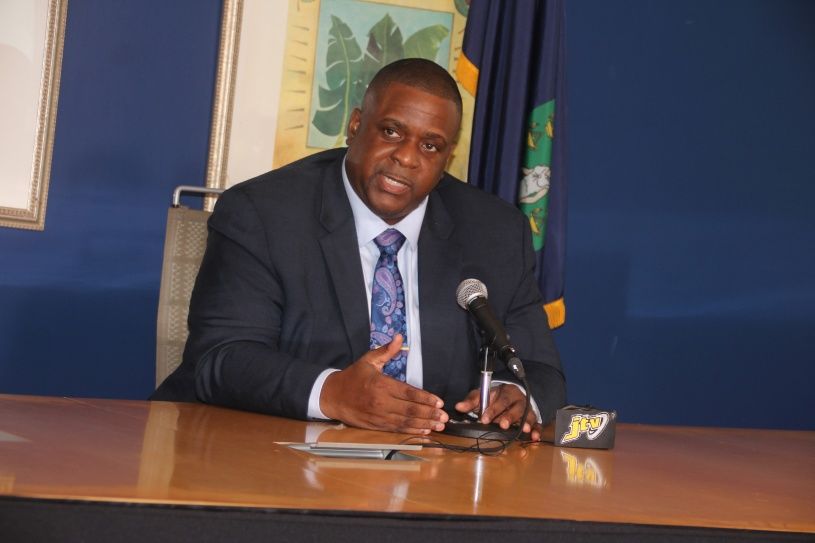 Premier and Minister for Finance Hon. Andrew Fahie has heavily defended his administration’s decision to hire political advisers for all ministers and junior ministers, stating that, unlike the UK, these advisers would not be engaged in lobbying and party politics.

A post-cabinet statement published recently announced that the British Virgin Islands was adopting the UK model, which was tweaked to suit the territory’s needs.

Further, Opposition Leader Hon. Marlon Penn, via a statement issued yesterday, July 26, declared that the political advisers was in effect to assist the ruling party in its election campaign for the next general election at tax payers expense.

Addressing the issue via a statement on Monday, July 27, Premier Fahie said, “In the UK system, the ministerial advisor also works at a political level in the Minister’s constituency and works closely with the Minister’s political party. The UK adviser can even function as a lobbyist of sorts between persons and supporters in the party and the UK Government.”

The Premier further explained, “I can assure you that from the inception, the Premier’s Office has been clear that the Adviser will not be working with or alongside any political party or engaged in any lobbying as is done in the UK. We have put this into the terms and conditions of the contract. The adviser’s role in the BVI is strictly research, policy analysis and to assist the Minister with certain aspects of communications messaging, among other areas.”

The Premier also mentioned that the UK system was able to instruct or override the public officers; however, this will not be the case in the territory.

“The Adviser will conduct research and policy analysis and deliver advice to the Minister on whatever subject the Minister instructs. Where it is necessary for the Adviser to interface with the public service, this will be done through the Permanent Secretary, as recommended by the Deputy Governor’s Office. It is also important to note that the Adviser is not going to be duplicating the job of any public officer,” he explained.

The adviser will, in addition, be tasked to coordinating materials for briefings and submissions by reviewing, analysing and coordinating briefing materials, notes, background material, speeches, Ministerial correspondence, submissions, and other information submitted to the Minister and provide feedback to the Minister; reviewing papers, proposals and other subject matter going to the Minister, drawing attention to any political considerations that the Minister should take into account in his/her decision making, and liaising and consulting with relevant stakeholders, to obtain information, to seek advice and to assist the minister.

In the meantime, the Premier said funds have already been allotted for advisers in the budget on a yearly basis as there has always been the need for expertise outside the capabilities of the public service, which is often soured through consultants.

“So, my first point to you is that this is not a new expense being created. All we have done is give the role a title, streamline the terms and conditions of engagement, and in the interest of Good Governance, we have created some checks and balances so that neither the Ministers nor the advisers can abuse the post. That is all that we have done. We have merely put some structure and controls on an age-old practice,” he reasoned.

He also sought to clarify the remuneration package.

“Further to this, the amount that will be paid in remuneration is not the $1.35 million that the Opposition is throwing around.

He explained that the cabinet approved a maximum of three advisers to the Premier and a maximum of one for all other Ministers and Junior Ministers, and he is not obligated to utilize the maximum allowed.

He added, “There is nothing else to add on to this figure because the advisers are not entitled to any other benefits. The advisers are not entitled to vacation leave, sick leave, overtime, gratuity, phone allowance, travelling allowance, vehicle allowance, meal allowance or any other benefits. So, clearly, we are not near the base total of $1.08 million that the Opposition is peddling, and definitely a long way from the $1.35 million they are throwing around, which they have inflated with false and sensational assumptions about non-existent benefits.”

Premier Fahie also pointed out that the matter has been tossed around by previous administrations for the last two decades, and it was further compounded since the addition of Junior Ministers in the new Constitution of 2007 as it is one of great concern to improve the efficiency and effectiveness of the elected Government.

Since taking office in 2019, this administration has made some head-turning, controversial decisions such as hiring bodyguards for the Premier, retirement packages for legislators, implementing tax on remittance services and pursuing medical marijuana.