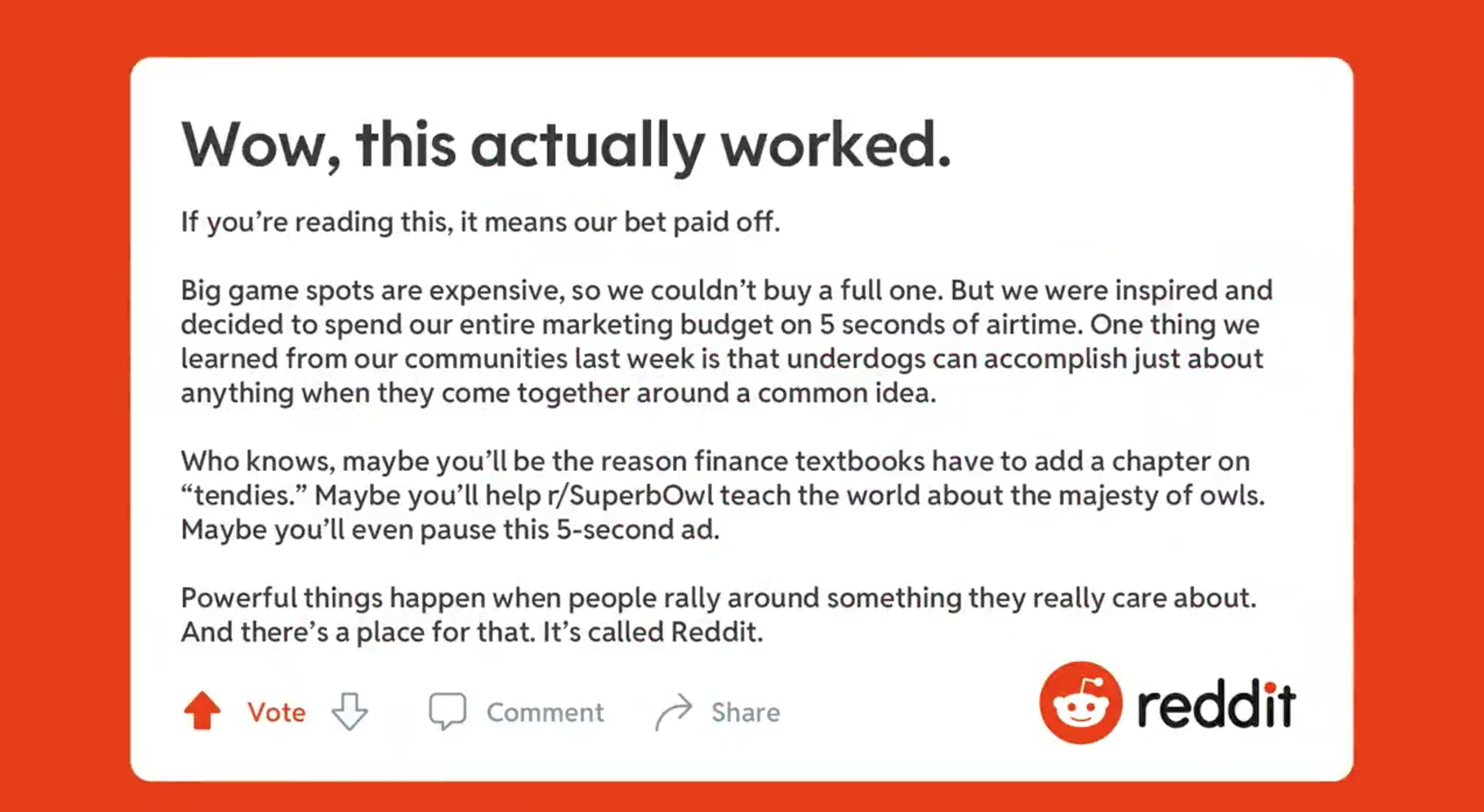 Reddit Chief Marketing Officer Roxy Young told FOX Business in a statement that the Super Bowl ad came together in "just a few short days" with the help of its agency partners at R/GA.

In all the craziness of Sunday night's Super Bowl, viewers in some of America's biggest cities may have missed an ad from Reddit.

The spot ran for a total of five seconds, consisting of a simple message honoring the "underdogs" involved in the GameStop trading frenzy last month, which appeared to be jammed between a car commercial and a video of horses.

"Wow, this actually worked," Reddit's message read. "If you’re reading this, it means our bet paid off."

The company acknowledged that while it couldn't afford to buy a full Super Bowl ad, it was "inspired" and decided to spend its entire marketing budget on the five seconds of airtime. According to Variety, a full 30-second Super Bowl ad cost around $5.5 million. Therefore, a five-second ad would cost about $915,000.

But the spot did not air nationally, as major networks -- especially for the Super Bowl -- do not fractionalize ad inventory. This aired on several of CBS' owned stations including WCBS in New York, KCBS in Los Angles, WBBM in Chicago and KPIX in San Francisco.

"One thing we learned from our communities last week is that underdogs can accomplish anything when they come together around a common idea," Reddit continued, in reference to the platform's speculative investing discussion forum WallStreetBets. "Who knows, maybe you’ll be the reason finance textbooks have to add a chapter on “tendies.” Maybe you’ll help r/SuperbOwl teach the world about the majesty of owls. Maybe you’ll even pause this 5-second ad. Powerful things happen when people rally around something they really care about. And there’s a place for that. It’s called Reddit."

Reddit Chief Marketing Officer Roxy Young told FOX Business in a statement that the Super Bowl ad came together in "just a few short days" with the help of its agency partners at R/GA.

"I am really proud of what we were able to achieve with just five seconds and think it beautifully captures the heart of Reddit in our unique and brilliantly absurd tone,” Young added.

The advertisement comes after Reddit users banded together last month to buy up the struggling video game retailer's call options, causing GameStop stock to surge to unprecedented levels and hurt market short-sellers. According to data provided to FOX Business by financial data firm Ortex, short-sellers have lost at least $19 billion on GameStop stock as of Jan. 29.

WallStreetBets then began targeting other heavily-shorted stocks, including AMC Entertainment Holdings, Blackberry Limited, Bed Bath & Beyond, Express Inc, and Nokia Corp, among others.

The move caught the attention of Wall Street and Main Street alike and prompted investing platforms like Robinhood to restrict trading on the securities. Robinhood's decision sparked anger online, resulting in two lawsuits being filed against the company before the move was later rolled back.

However, some lawmakers, like Rep. Alexandria Ocasio Cortez, D-N.Y., Sen. Ted Cruz, R-Texas, and Sen. Elizabeth Warren, D-Mass., were all in agreement that there should also be a congressional investigation into Robinhood's action. Robinhood co-founder Vlad Tenev has reportedly been asked to testify on Capitol Hill before the House Financial Services Committee on Feb. 18 at 12:00 p.m. ET to address the recent market volatility.

Tenev previously said in a Twitter thread said that the investment app restricted the stocks because it has many financial requirements, including "SEC net capital obligations and clearing house deposits", which fluctuate based on market volatility.

"These requirements exist to protect investors and the markets and we take our responsibilities to comply with them seriously, including through the measures we have taken today," he added. "To be clear, this decision was not made on the direction of any market maker we route to or other market participants."

His comments came amid reports that major hedge funds with ties to Robinhood, including Sequoia Capital and Citadel Securities, were involved in the decision to halt trading. Both of the firms have denied involvement in the decision.

In addition, Treasury Secretary Janet Yellen held a meeting with the heads of the Federal Reserve, Federal Reserve Bank of New York, the Commodities Future Trading Commission and the Securities and Exchange Commission to determine if "further action" would be warranted related to the market volatility surround GameStop. Both the SEC and New York Attorney General Leticia James also said they would conduct their own reviews into the matter.

GameStop shares have fallen more than 7% during Monday's trading session as of the time of publication.